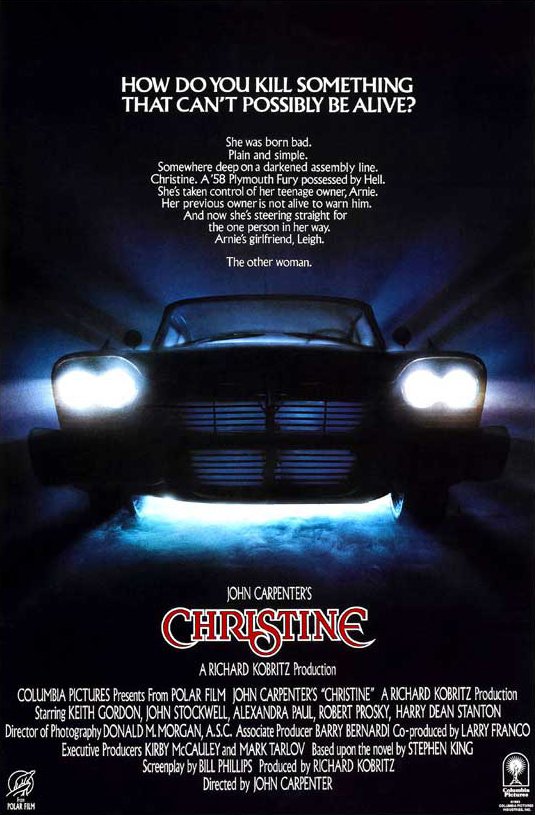 You may remember Christine as the bully from Carrie but the name is a coincidence. This car has been a demon for a very long time and is around to dish out the pain. The movie is about how corruption spreads fast and you have to be careful who you hang with or you could be in trouble. The main guy’s friend is annoying with how quickly he goes on the dark side though.

So the movie starts by introducing us to Arnie who has had a rough time of things. He gets picked on, has really strict parents, and just doesn’t have a high opinion of himself. Well, one day he finds a super beat up car that looks like it’s on its way to the scrapheap and decides to buy it from this shady old guy. His friend Dennis tries to convince Arnie not to do this but he does anyway. Miraculously Arnie is able to make this car look brand new and all of a sudden he has become an overconfident school delinquent. Dennis sees that Arnie is getting worse and worse but what can he do about it?

I’d say that Dennis is definitely put in a really tough spot here. There’s only so much that you can do as the best friend. He’s not family and it’s not like he’s an adult figure so his best bet is just trying to reason with Arnie as friends. Unfortunately that guy is so far off the deep end that it’s really tough to do so. Dennis is a stand-out character for trying so hard. Additionally, Dennis did risk his life in stepping in when the bullies had Arnie outnumbered 5 to 1 and disarmed the guy with the knife.

It was a great scene for him and he really didn’t lose faith in his friend until the end. Dennis really did everything he could. Meanwhile you can basically flip everything that I said for Dennis for Arnie. That guy was annoying on every front. Look, he definitely did have a tragic origin story, I can’t argue against that. The bullies scene was really rough and knowing that he has to go through things like that at school is tough. It’s also easy to see why he has so much self doubt.

The main issue is once he gets the car Christine and suddenly does a 180. If the car is going to mess with his mind, I’d like to see it be gradual so that we know Arnie is actually fighting. Instead the guy goes crazy almost immediately and starts taking this out on Leigh, his parents, and everyone around him. He stops being sympathetic real quick and at the end of the day he chose the car over everyone else. How much of that was mind control and how much of that was really him is the question that the film leaves you with.

It’s hard to say but I’m always big on willpower. If you didn’t produce then that’s game over. So Arnie letting himself be turned evil like that was just bad. Especially when he turns on Dennis who was always in his corner. Beating up on the bullies and taking them out? Yeah that’s rather intense but you definitely see how it could happen. Once he started driving crazy on the highway and acting hostile towards Dennis then things were really crazy. Likewise with taking such a hard stance with Leigh after she had nearly just died by choking in his car.

Arnie’s pretty bad but then I’d also say that Leigh should have completely cut ties with him after the first incident as well. Don’t go back to him after that no matter what he says. Following him into the garage led to another blow-up since the car was his top priority and even after that she’s trying to save him. Perhaps she was extra perceptive that it was the car messing him up but realistically that’s not the first thing that you would think of. She was rather easy on him.

Another character who suspected the car awful quickly was Rudolph. He’s a detective but a rather odd one. I don’t see how anybody could jump to the supernatural conclusion too quickly but this guy seemed to suspect it right away. He was asking a whole lot of questions about the car and how it was fixed so quickly but I’m not even sure what he was getting at. It felt like he had to be hinting that he knew the car was supernatural but that’s really a headscratcher. How he could possibly have jumped to that conclusion (Even if it was correct) is a bit beyond me there.

Props to him being a great detective I suppose. He was a nice character though and I would have liked to have seen more of him. As for Christine, well she’s evil from the jump so it’s not like you can reason with her. She gets jealous quickly and is always ready to exact lethal revenge. If she hadn’t gone after Leigh then you could have at least tried to paint her as a more sympathetic character trying to protect her owner but since she is possessive like that, then there’s no shot. Of course she did the same thing in the past to the previous owner’s family so she was just always like that. I’m cool with the film not going any further into the past because I think it actually makes things more scary to know that she was just randomly an evil, sentient car as opposed to some long backstory about how she turned out that way.

The film isn’t quite as violent as the average King title. The car does take some people out for sure but usually not in super gruesome ways. The violence at times is more implied than shown explicitly. One guy gets rammed to death for example but whereas in another film we would see every moment of that for a drawn out period of time, it’s not quite as intense here. Christine is in general a bit of a mean spirited film though with the average bullies running around and causing trouble. They really go all in by attacking a second time and then you have Arnie’s boss who is rude to everyone for no real reason.

The romance here is really on the weak side for obvious reasons. The relationship with Leigh and Arnie was never going to work out with him being on the dark side and all. I really hope the film wasn’t gunning towards a rebound later on but I’ll choose to believe it wasn’t since it ends pretty quick. I was expecting a different romance plot to continue but the other girl pretty much got completely written out after the opening scenes.

Overall, Christine isn’t really a fun film to watch but at least it’s fairly tame so I wouldn’t say that it’s too bad. There just aren’t very many happy moments and with Arnie being corrupted immediately, you can’t even root for him to really be saved by the end. If you really like evil cars then that might be enough to push it over the edge for you but otherwise I’d say to skip this one. Meanwhile one character nearly chokes to death here and it reminds me why I have to eat so slowly at Jumbo’s pizza. The cheese is so thick that I swear it’s a choking hazard so I always warn people about that when I recommend the place. Top 2 pizza in the whole world but definitely an intense one so don’t take big bites.