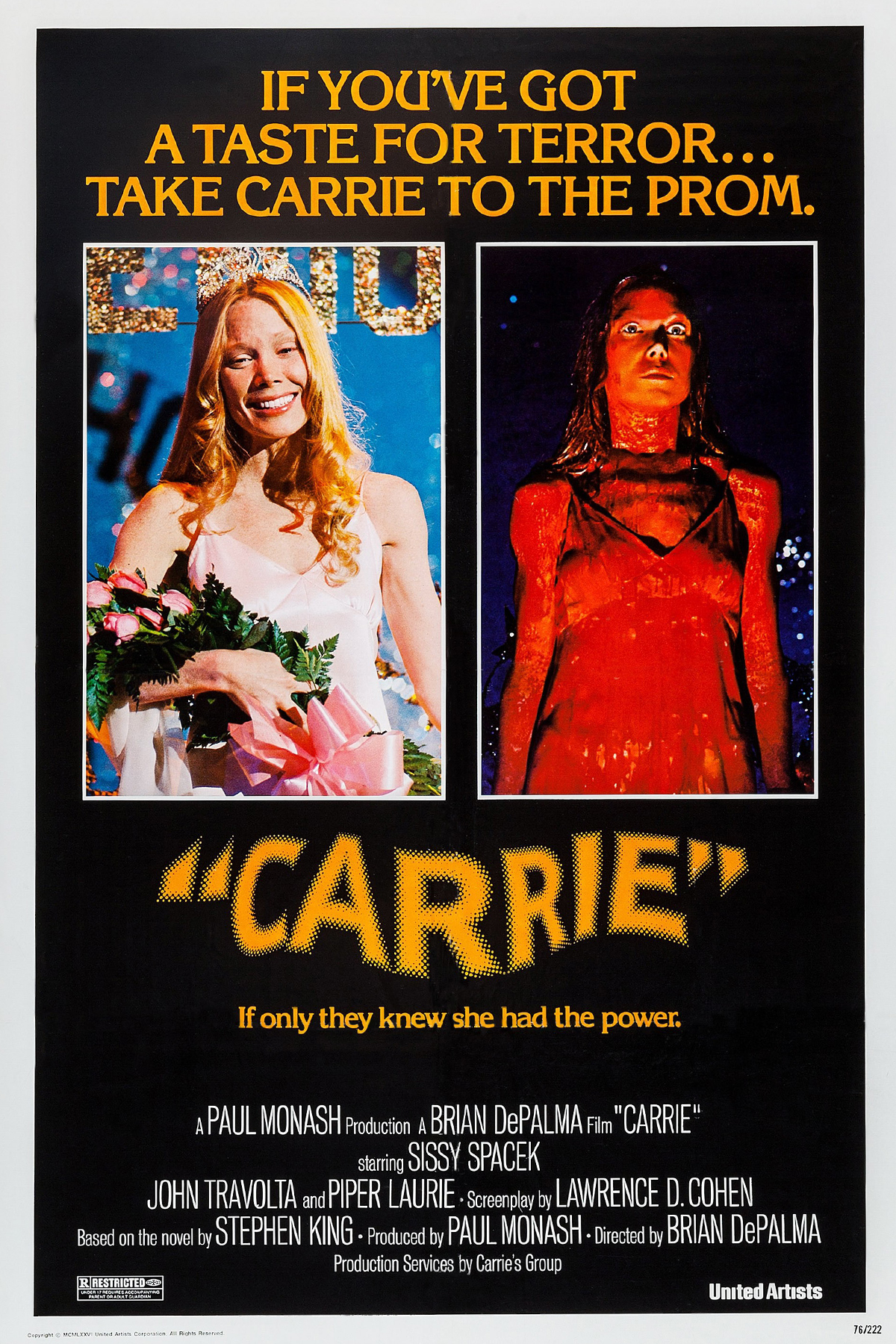 Carrie is a very well known movie. I’d wager that every horror fan has heard of it at some point or another and so you generally know the climax before actually watching it but the rest of the film is the adventure. Unfortunately I can safely say that this film is definitely not going to rank at all. Right from the start the movie begins on a low note and doesn’t really let up from there.

When a movie starts with an extended fanservice scene at the showers you know that you’re going to be in for a looooong ride. The whole first scene may introduce how Carrie was brought up in a way where she doesn’t know basic facts but it’s probably one of the worst ways to go about it. The bullies are everywhere and taking names as expected and you’re ready to move onto the next scene. Carrie was bullied so thoroughly here that she was traumatized and at home her abusive mother Margaret blames Carrie for this since Margaret has very crazy views on the world and sin.

Out of all the girls who messed with Carrie, the only one who feels bad about this is Sue and she wants to find a way to make it up to Carrie. So she has an idea, she’ll convince her boyfriend Tommy to take Carrie to the prom and pretend to like her. This will in theory get Carrie’s confidence up and allow her to make friends which will buffer the impact from Tommy leaving Carrie to go back to Sue afterwards. This plan is anything but full proof however it’s the best that she’s got and Tommy decides to roll with it. Little do they know that the main bully Christine also has plans of her own for the prom to try and wreck Carrie’s life once and for all.

The whole town is very mean spirited that’s for sure. The only two really decent characters here appear to be the teacher Miss Collins and Sue. Tommy’s okay as well I guess but very weak willed and probably should have said that the plan was not a good one. At the end of the day he just listens to Sue’s ideas without really throwing his own views into the mix and that was a big mistake. I didn’t think the plan was very well thought out at all because no matter what, someone is going to be feeling real bad by the time this is all over.

Lets dial it back though and first we’ll talk about what didn’t work for the film. Obviously the fanservice is the big issue right off the bat and destroys any momentum from the outset. Not to be stopped there though, the film even throws animal violence as the villains slaughter a bunch of pigs in order to get the blood they’ll need for the plan. It’s yet another edgy moment in what I would call a very edgy film. The movie didn’t even need to go that far because things were already really dire and a lot of other traps would have worked without the animal component.

Then we have the crazy mother where all of her scenes are definitely real sketchy. She’s always trying to drill fake lessons into Carrie’s head and mess with her further. It’s rough as Carrie is trying to do the right thing in not talking back to her but in the end that just results in her having to give in. Margaret’s just way too far gone at this point for anyone to help her out. Considering that Carrie has powers and is seemingly in control of them when she wants to be, Margaret is lucky that she’s still around at all.

We can’t forget about the bully Christine who is basically around just to try and make Carrie’s life as miserable as possible. I liked that the teacher actually stood up to her though. A lot of the time it seems like the bully gets away with everything but here Miss Collins actually took a swing at her and forces Christine to run off. It’s one of the rare times where the teacher actually got a complete victory over the student which is incredibly rare.

Billy is just as bad for going with the plan. I wouldn’t even say he was coerced into it, the guy was thrilled to help out. They had a very toxic relationship from the start that’s for sure. All of their scenes are painful as well and you’re waiting for them to get bumped off but they actually lasted a bit longer than you’d expect. In the end all of these bad characters and scenes add up to make for an awful movie though. You can’t really go back to back scenes without something bad happening. The film rarely gives you a chance to actually be happy.

Take Carrie for example, she is doing her best to have a fun life but you know that trouble is around every corner. I don’t blame her for saying no to the prom at first because in 99% of the cases she would be right that it was a trap. It actually wasn’t this time but it very well could have been and why put yourself in that position? Then Margaret was pressuring her from the other end so Carrie ended up going and the whole thing didn’t work out. Even in the brief moments in the party where she was having a good time, you knew that it couldn’t last.

Carrie was a good character though and I can see why she would blow up at the end though. After a while it was just too much. Too bad she couldn’t target only the villains though but by then her headspace was a little too cluttered. It’s ultimately what ended up turning her into more of a villain rather than ending things off with an anti-hero development. A part of me thought that Sue would end up turning into a traitor in the end so I’m glad that this didn’t happen. While I didn’t like the plan, at least she was trying to be helpful so I can give her that. Likewise for Tommy but then he loses all of those points when he actually does have an affair with Carrie.

He may be doing Sue a favor but cheating wasn’t included in that. He’s still her boyfriend after all so you can’t really cross that line without making things into an issue. Finally Miss Collins was definitely the best character here. She took charge and kept a level head. Considering that she was dealing with so many troublemakers, I’d say that she did a good job in keeping them all under control. By the end she may have made a mistake in how things were handled but from her pov it is easy to see how she would make that mistake. The party was really hectic and she couldn’t let any bullying go on over here. It was just game over there and she had a grisly end even though she tried being helpful.

They did a good job with the fire effects here. The climax felt like something out of a thriller film with explosions everywhere. The film also had a suitably ominous soundtrack going on for it. So on a technical level I can give the film some props there but at the end of the day it’s just too relentlessly depressing for all of the characters involved. The film would need a lot of clean up before I could say that it was ready to be a good film. Maybe throw in the government and some kind of subplot about tracking Carrie down and the origin of her powers. I wasn’t a big fan of the writing so you could also change large parts of the script and scale down Margaret’s scenes.

Overall, The cast here is very weak which mixed in with the rest of the film’s issues made this one an easy L. You’ll want to avoid it even if the film does have a fairly legendary reputation. There just isn’t a lot of fun to be had here. The whole town may not have been on Carrie’s side but ultimately there was nobody to rescue her from her home situation or help out at all so they may as well have been. Carrie really was all alone for most of the day and ultimately this ended up catching up to her.