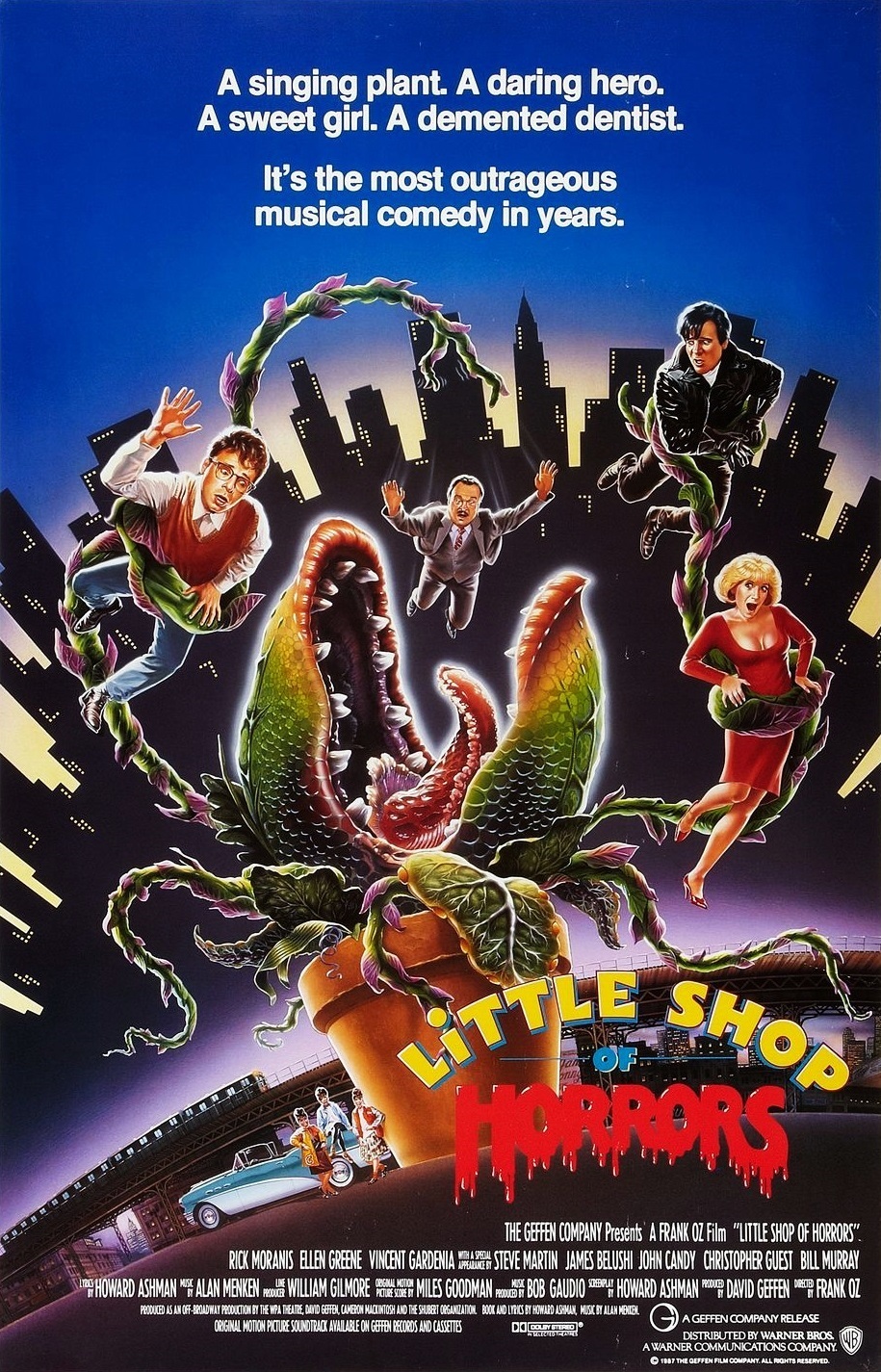 I can’t say that I enjoyed the first Little Shop of Horrors much at all and this one really isn’t much better if it even is better. The concept of a plant that eats people is certainly interesting enough but the film is bogged down with bad characters and the music doesn’t work very well. I’m convinced that the best songs are always found in films that are ironically not musicals. The musicals don’t seem to land as well, even if that does sound a bit odd. I guess One Piece Film: Red is an exception but I’d call that more of a concert film than a musical so the point stands.

The movie starts by introducing us to our hapless hero Seymour. He’s a big pushover at the shop and he has a big crush on his colleague Audrey but doesn’t have the guts to admit it. He’s always messing up with something and so the day gets away from him awfully fast. One day an alien plant crash lands on Earth and Seymour ends up looking after it. Perhaps his luck is finally changing? This plant is growing fast and may turn the plant store he works at from being a place that nobody know about to a full highlight among the town’s residents. That’s quite the upgrade but it’s not without a catch. This plant which he calls Audrey II can only grow with blood and it needs quite a lot of it. Seymour has to be careful that he isn’t tempted too far into the dark side and if he lowers his guard he may be eaten alive.

I have a lot of issues with the film so where to start. It’s always fun trying to think of how to play this. I guess we’ll start with the music. It gets a bit obnoxious really quick as the songs keep jumping in every few minutes. I didn’t even care for any of the songs all that much. They don’t really fit the film too well and they weren’t really my style. It felt more like a quantity over quality thing and quickly hurt the movie’s pacing.

Then I usually don’t really consider attire to venture into the realm of fanservice on its own. It’s really all in the camera work if you ask me and how the directing is going but this film is quite shameless about it. Any time Audrey is on screen you can tell the film is putting a lot of focus on her and aside from just smashing the film’s story to pieces as these scenes detail it, it’s just unnecessary. Even beyond being used for fanservice the whole time, Audrey looks really bad here. So she lacks self confidence like Seymour and as a result she goes out with Orin, an abusive guy who treats her like dirt the whole film.

She seems to think she deserves this for some wild reason and it’s why she never approaches Seymour. Keep in mind that this film is part comedy and dare I say parody so that’s probably supposed to be a bit funny but it’s just bizarre. The film could have done a lot better with her character. Then any scene with Orin in it is very cringe worthy. So he’s a dentist in this version and the guy gets really excited to be dishing out pain to people. In fact the only reason he took the job is because it gives him a legal way to inflict pain on people for as much as he wants. The guy is as unbalanced as they come but you probably knew that by now. It takes a while for him to be taken out and in the meantime he’s just awful.

Then this isn’t a vampire film but it might as well be with how Audrey II has to suck Seymour’s blood the whole time. Those scenes are always rather gross and the film doesn’t hold back on the sound effects. There’s something about drinking blood that’s always rather gut wrenching and one of numerous reasons why any vampire related media is in for a very rough time right out of the gate. All of those scenes are just really bad. I’m glad that Audrey II talks a whole lot and has a full personality but that’s hardly enough to help the film fully recover. At least I can give it props for trying some different things and expanding on the overall plot but it would need serious re-writes to even approach being good.

Making Audrey II a big villain with a lot of fight scenes would have been a good first step though if you ask me. I already talked about Seymour so you can guess that I don’t like the guy. He doesn’t stand up for himself at all and that’s a big problem. He is quickly tainted to the dark path and while things work out for him, it’s hard to really root for him. It’s not like he’s some hero. He had a rough time of it sure but it doesn’t really excuse his actions at all.

The only character I liked quite a bit was Mushnik and even he can’t really be trusted the whole time. I liked how his personality did a 180 near the end though. You really didn’t see it coming because the whole time he had seemed like a really decent guy. Perhaps not the nicest but from what we had seen of Seymour you would assume that he used to be nicer but finally had enough of the main guy making a mess of things. So Mushnik’s character arc goes in a unique direction.

There’s also a random character who gets involved in the dentist subplot but that’s more of a random moment than anything. What happens when someone who enjoys pain meets someone who likes dishing it out? It certainly makes things tricky that’s for sure. Maybe all of the characters in this film are just crazy. It would explain a lot. The movie does have a decent ending to set things up for the sequel though. If it decided to take a different turn you could really make this into a proper alien invasion film.

One nitpick for Seymour’s character is also that he doesn’t think things through. When the shop was finally getting famous due to the big plant, he should have tried to stockpile as much money as he could so he could then escape there. Take Audrey and go to a better city, leave Mushnik to deal with the plant. Mushnik would be thrilled at first and you can let him figure out the true danger of the plant. It would have made a whole lot more sense than just not wanting any attention and putting himself in a corner. He always made the wrong choices.

Overall, The Little Shop of Horrors is a movie you will want to pass on. It does live up to being as crazy as the premise of the movie would suggest but it’s just so bad on every level. There really isn’t any saving this movie because you would need to try again from the ground up. At this point it’s probably worth just letting this franchise rest in peace instead of trying once again. After a point you just have to cut your losses so I would say to avoid this film and keep moving. You aren’t missing anything here.