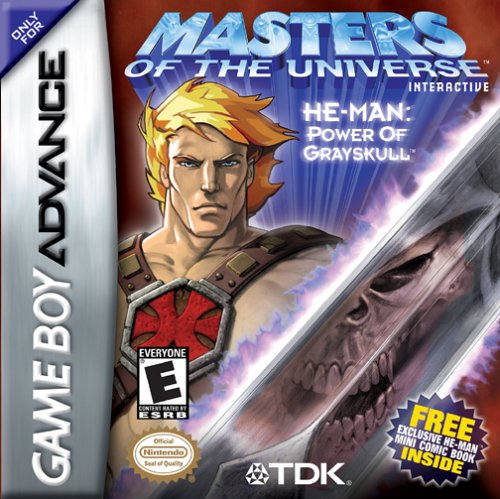 It’s time for a classic He Man game! It’s been a long while since this one came out so you could say that it’s about time I got to play it. The franchise has so much potential for video games so it’s a shame that it doesn’t have more. This one’s fairly short and I wouldn’t say that it’s the highest budget GBA game out there but it still does the trick. I had a good time with it at least. You may finish it at turbo speeds but you’ll have a good time and there are no slow parts in the game.

The basic plot is that Skeletor is up to no good and He Man has to stop him. I mean that may be oversimplifying a bit but that’s what is boils down too. Different characters like Cringer and Teela get captured so you have to save them. Along the way you get to face off with all of the classic He Man villains as our hero takes them down one at a time. Nobody is ready to handle the Man of Might as He Man just keeps going to town on everyone. There is a reason why he is known as the strongest in the 9 realms after all. His power just never stopped rising and with the sword he is unbeatable.

It is nice that they got some voice acting here for the iconic “I have the power!!” moment. That was really cool and I’d like to see them keep that up. That is the only real voice acting here but it started the game on the right note. Now when it comes to sound effects the game is a bit lazy because there is only a single damage effect used for every minion and it’s not the most flattering one. It’s not a deep growl or anything but more of a whimper. Surely they could have switched that up a bit.

The graphics are pretty solid though. I thought they looked good for the GBA era. Each character is clearly defined and you won’t have any issues navigating through the levels. The soundtrack may not be very memorable but it’s not bad either. It’s just a little limited which is what holds it back here. I’d like to throw in some more songs, maybe even the opening to the TV show for the final level but I realize that is pretty much unheard of so it’s not something you’d expect.

The game has 13 levels and they are split between normal platforming levels and racing ones. Racing levels are extremely easy so you shouldn’t have any trouble there. Just keep on moving and you’ll make it to the end eventually. It’s an overhead racer so you’re just moving side to side and jumping. You don’t need to worry about going fast since you’re automatically moving as it is.

As for the platforming levels, usually you have to get somewhere which means beating up a bunch of villains. The villains are limited and don’t respawn so don’t worry about fighting them. Sometimes it’s nice to get them out of the way so you can concentrate but other times you can just keep it moving. Each level lets you know the full stats and what you may have missed there. There isn’t a lot to each level so you could 100% complete it if you want to. The game shouldn’t take you longer than 2 hours and you’ll probably beat it well before that.

The only really tricky boss would be the final one I’d say. Skeletor hits hard and he can also heal himself by using the green orbs in the room. Each orb restores your full health and does the same for Skeletor. So the trick here is to position yourself in front of the orb. When you are going low on health, just use it first so that he can’t. Then run to the other orb and repeat the process. You can win this with pure button mashing as a result and it only gets tricky if you let him get to the max health. That’s when it’s all a bit dicey. So long as you keep outsmarting Skeletor then you should be in good position.

Of course the length is the main drawback against the game so that’s the only thing to consider here. If the game is a lot of money then you may want to wait since 1-2 hours is all you’ll be playing this for. There aren’t any unlockable levels or post game to extend the timer for either so the main story is it. Once you’re done with that then you are done with the game. Also there are no save files so you actually do need to put in a password when you turn the system off. Fortunately someone wrote down the passwords for each level online so you can do that if you forgot to write it down. People are definitely dedicated with writing things down which is always appreciated. Trying to write it on your own would be possible of course but it’s nice to not have to worry about that.

Overall, He Man is a fun game. It may not last long but the fundamentals are there. With more of a budget I’d like some more attacking options and more sound effects but it does well enough. There are no parts that dragged on and of course I like the He Man franchise so that part was definitely a plus. If you’ve still got a GBA or a DS lying around then I’d recommend picking this one up. You can probably get it for a fairly decent price and it’s unlikely that we’re getting a big He Man game anytime soon so you have to enjoy it now while you can. It’s also got that retro GBA overhead fighting game feel that’s hard to replicate.