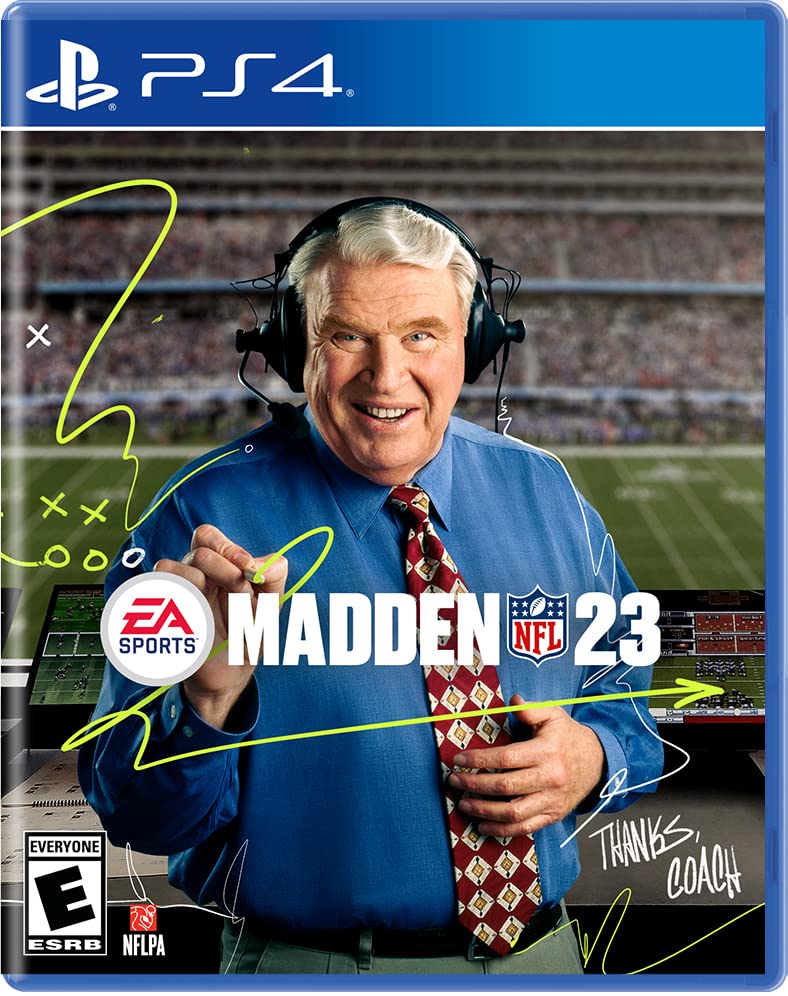 Madden is back!! Yesssss. Now I’m caught up and of course this has always been a thrilling series from cover to cover. In many ways it is completely unchanged from Madden 22 so you can really just jump right back into the mix without learning any new combos or things like that. As always to test the game out I played a full season. Only difference from usual is that I decided to play the season as a custom made QB in face of the franchise instead of doing a normal season. I have some issues with the mode but at the end of the day it is an elite game as you would expect.

First off the graphics are top tier as you’d expect. A whole lot of work goes into the visuals and it was certainly worth it. Everything just looks very modern and the presentation is really nice while playing. You get highlights, stats, and announcers talking the whole time. It feels like a very genuine Football product. Then the soundtrack may never be my favorite for the menus but the sound effects while in the game are on point. Those are the ones that you want to watch out for after all to make sure it feels real and it does.

There are a ton of modes to play here. If you have PS+ then you can jump online for some games which is absolutely what I would do if I had it but otherwise playing offline will still get you unlimited enjoyment. The fun never has to stop while you’re here and you can quote me on that. Switch things up by changing your position or playing a different mode. You can even mess with the camera angles now to change things up.

The gameplay is fantastic as always and the games go fast so lets talk about the small things that I didn’t like. One is what I’d consider to be a major oversight. In the face of the franchise mode there is no way to see the league standings. You can look at each individual schedule one by one and calculate this or pick apart the records but the fact that there is no league standings to view is really crazy. It’s the kind of oversight you just can’t believe you’re seeing because it feels so obvious. I cycled through the menus so many times before finally googling it and saw people came up with the same issue all over the place. That’s just crazy, I’m still pretty shocked about it.

Then the other one is that the camera tends to break down randomly during the franchise mode. I’ve noticed this usually happens on the first play of your possession if the glitch triggers. Basically the camera goes in front of you so you can see your backfield but nothing in front. This makes passing the ball impossible because you literally cannot see where you’re throwing. I would always audible to a run and calling a time-out works but it’s a very odd glitch. I didn’t really know what to make of it.

The Madden series definitely still has a bunch of kinks to fix. It seems like most glitches just stick around year to year because they don’t want to fix the source code. It’s something fans have complained about for a long time now and you absolutely get it. That said, fortunately these bugs are not ones that you are likely to run into on your daily adventures. While playing through the game I didn’t encounter anything crazy outside of the camera after all.

In terms of gameplay the only thing I would like to see if the receivers get more aggressive. It’s very impractical to throw any deep ball unless your receiver is massively wide open because otherwise the cornerback starts sprinting and just jumps for the ball while the receiver waits for it the whole time. It’s not a great look for the offense and it means you will usually be throwing small slants and screens. It works but it doesn’t feel like the most realistic way to play the game. You don’t want to be gunning it every down but it’s something that really separates the older Maddens from the newer ones. It’s why I loved Madden 2004 so much and still consider it to be the best.

As always scrambling is a blast though. I absolutely recommend playing a team with a fast QB because nothing beats just getting out there and running a lot. It’s why with my self made QB I prioritized speed over power and accuracy. I wanted to be able to get a 1st down with my legs when I had to. Unfortunately I didn’t make the playoffs as I finished my year 9-8 and lost out due to a tiebreaker but I got it close. There was just one losing streak early on that hurt me a lot as I was getting used to the 3D camera. Once I went back to the standard view then I started getting the good wins again. All Pro is a very fair difficulty to use where you have a challenge but it’s not too crazy.

Overall, There’s not a ton more to say beyond that as this is still the Madden that you know and love. It hasn’t changed much but that’s part of what keeps the appeal going for so long. I do hope they sit down one day and really try to optimize this as the best game it can be but in the meantime I’ll still be around and ready to buy the game whenever the new title comes out. There is no better game to simulate the Football experience after all. It may have some issues but it’s still supremely entertaining to watch and I do feel like there is a good budget here for the technical elements. I’d highly recommend checking it out.