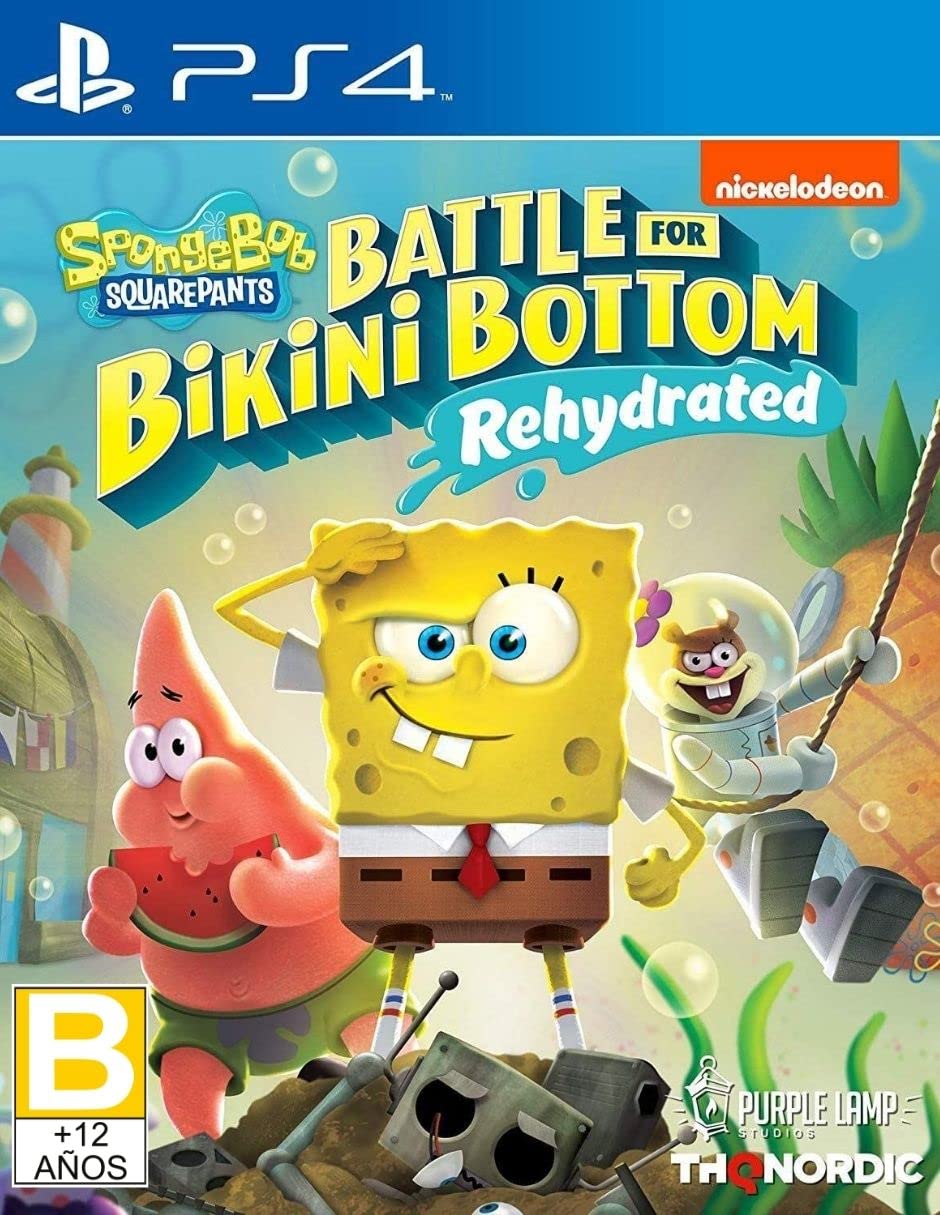 Spongebob Squarepants is finally back! I gotta say that my experience with the Spongebob franchise as a whole is very light. Seriously I mostly know it from the memes and all but when it comes to sitting down and watching an actual episode I haven’t done much of that. It always looked like fun though and I do like me a good platformer so I had to jump in and have fun here. The gam elives up to the classic platformer formula. It’s perhaps a bit strict about how many Golden Spatulas you have to grab though. Fortunately you only have to get all of them if you’re aiming for the Platinum though because otherwise that would have been bad.

An army of robots is attacking the underwater country so Spongebob is called in to stop them. He is no stranger to crazy situations after all and wants Merman to be proud of him so Spongebob agrees to help. His friends will also be around as back-up support. The villain here seems like it might be Spongebob’s old enemy Mr. Plankton but he can’t prove that yet so for now we jut have to go in there and get as many quality wins as possible. Each robot destroyed is one less than can cause terror and destruction to the many.

The basic gameplay is that of a 3D platforming so you’re running and jumping as you go through the levels. You can attack and ground pound. In addition each character has their own special abilities. Spongebob can grab onto ziplines and so a super jump. Sally can glide and shoot out her lasso and finally Patrick can throw things really far. So the levels use all of their special abilities and have unique obstacles waiting for everyone. The objective of the game is to obtain 75 Golden Spatulas in order to enter the villain base so you get these at the end of every mission given to you by the other characters and others are also scattered around the worlds. Considering that there are 100 total Spatulas, you can see how beating the game actually comes rather close to 100% completing the title. Perhaps that will be enough to get me in here for the platinum at some point but right now I’ve had my fill of collecting.

The level layouts are good and there is a whole lot to do on each world. You never really feel confined and it’s so big that it’s part of why the collectibles are hard to find. At times the camera angles can get a bit wonky but on the whole it’s good. The worlds are all pretty different and stand out so no chance of mixing them up or anything like that. They always have a lot of variety. I will say that you should try to definitely get as many seashells as possible so you can buy lots of Spatulas from Mr. Krabs. Those will all come in handy towards the end of the game.

The boss battles are all fun here. They each have different rules and objectives towards beating them so none of these are copy and pastes. The developers really got to make the most of their creativity here. Meanwhile the animation is definitely sharp. This looks like a solid PS4 game. I won’t say the graphics are out of this world or anything but it’s all very clear and bold which is ultimately the objective. The soundtrack is a little less memorable though and doesn’t have the kinds of tunes you’d hear in Mario or Sonic.

So on a gameplay level this is very strong and I have no issues. The only part of the game that isn’t quite as solid is the story/characters. This is Spongebob of course so it’s more comedic but the characters can be a little annoying. There aren’t many sound clips here so you’re going to be hearing the characters repeat the same lines over and over again. They’re not exactly great lines either so you’ll mostly just be annoyed after a bit. Ultimately they are fun in small doses but I would say that the cast doesn’t hold up quite as well compared to other comedy casts.

Squidward is always good though and I root for the guy to go far. He really tries to stay out of trouble but it always has a way of finding him regardless. There’s not really a lot of crude humor or anything beyond all the underwear jokes so the game doesn’t go that far. I’d like a game that focuses on Merman back in his prime though. Now that would be really good to see.

Some quality of life updates would be fun like being able to warp to a specific point in the world instead of walking over and hopping into boxes. It’s probably something the devs felt just wouldn’t fit into the world I suppose. The game length is pretty reasonable and this should take you a few batches to complete. Throw in the opportunity to earn a Platinum trophy and that just makes the game even longer which is always good. I wouldn’t have minded if they added more racing levels though, they were some of the highlights of the game. It reminded me of Sonic Adventure 2 Battle and I always like racing on slides and rail type surfaces.

Overall, Spongebob has a solid game here. It may not be Mario but it’s still pretty good around the board. I’d consider this to be a AAA platformer and the production values check out. Replace the cast with a more intense one and the game would be even better. At the end of the day if you’re a Spongebob fan then you should love this game and if you enjoy platformers then you should like the game regardless. It’s fairly easy to complete but you will need some talent to platinum it since getting the final Spatulas can be intense. There were a few I skipped over like the bowling ball balancing segment which was really intense. I suppose I’ll get to test my limits against that one when I ever get back to this title.