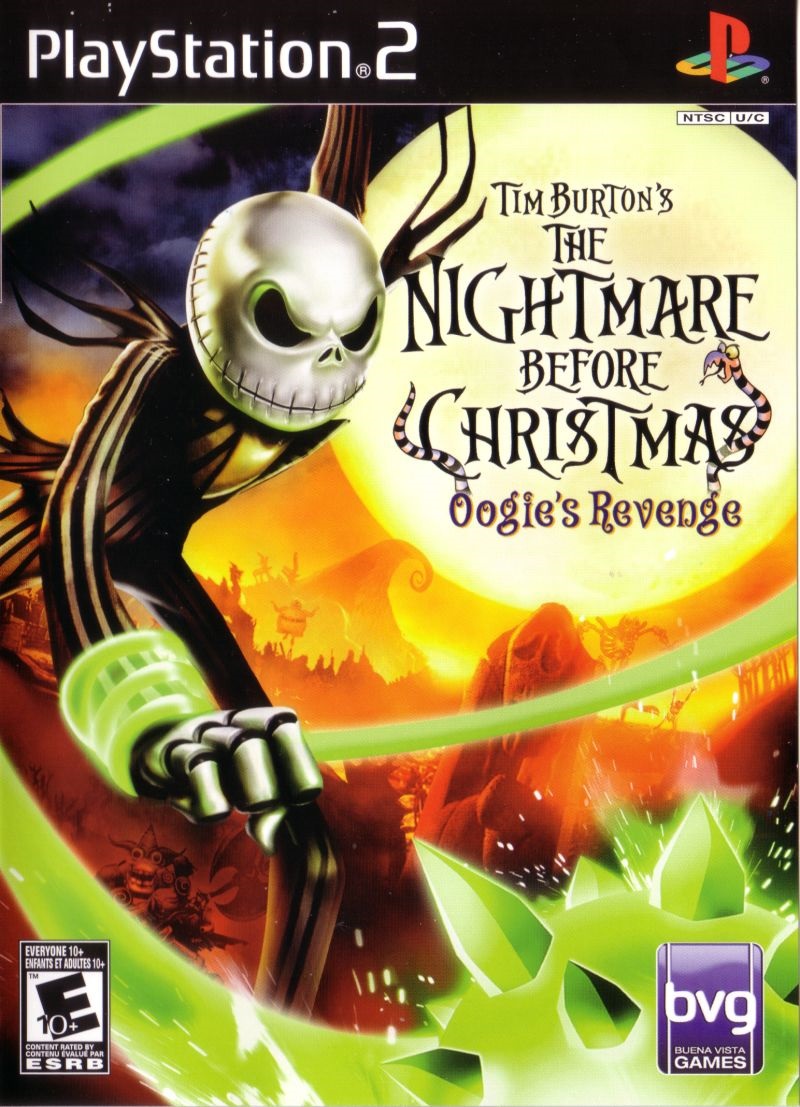 The Nightmare Before Christmas is a fairly iconic film so I suppose it makes sense that it would get a game at some point. Games based on movies or around movies typically don’t have the greatest rep but a lot of times they can still be fun in a basic sense. You’ll have your classic platforming as you go from level to level and that’s enough. Unfortunately where this game falters a bit is perhaps in trying a bit too hard to be more than that. We’ve got power ups and different weapons as well as a bunch of puzzles but they aren’t all connected quite well enough. In the end this makes the game jus end up falling short.

The game starts off with Oogie Boogie making his big return. He wants revenge on Jack and so he has stolen the masters of every holiday. They are all gone now and this is really bad news for Halloween Town. Jack has to try and save them but is this actually a trap? Jack has a new whip that he can use to strike at his opponents and manipulate in all kinds of ways so he will have to hope that this is enough to get the big win in the end.

First off what I do like about the game is the combat system. Being able to swing the whip around is actually really fun and it’s a lot more action oriented than you would expect. There are many sections in the game where you just have to keep on swinging and take down enemies in droves until they all go down. It’s basically part beat em up and who doesn’t enjoy that? Additionally you have alternate forms in fire Jack and Christmas Jack which come with their own special abilities. The Christmas form doesn’t typically damage opponents as it’s more about throwing presents to stun opponents but the fire form actually does burn opponents to a crisp. So that one is handy but it runs out of ammo almost immediately.

When I’m bashing away at enemies then things are going well. Meanwhile the graphics are also pretty solid here. It certainly captures the classic feel of the movie with the very memorable designs. This is still Halloween Town of course so everything is appropriately decorated. The game knew what it was trying to do and did it well. It’s also surprisingly long and should take you nearly 20 hours to complete. I can tell you now that this is very rare for movie-tie ins. You do not typically expect to see one of these games take nearly so long.

Now for what didn’t work, the game’s soundtrack is incredibly limited. There are basically 2-3 songs that are constantly looped as you play through the game. They just keep playing that Halloween song and for the boss they have the song with the kids. You have to end up hearing this song over and over again. Hey the songs ae catchy but after a while the spamming is just a bit much. You want something more and this is a game that could have stood to have been a bit quieter. Maybe at least change it for an instrumental version for some points which would have broken things up.

Additionally back to the puzzles, a lot of times you have absolutely no clue where to go. There is a map but it is completely unlabeled so it’s really not all that helpful. You can be lost for ages until you memorize all of the locations. By the time I completed the game I had a rough idea of where everything was so I started to move a little faster but until then I was getting lost constantly. This is not a fun game to be lost in because if there is an enemy around then you won’t be able to use your whip to climb so you have to beat them again. You at least get some money from them in order to buy more upgrades but it will take a while because the upgrades are expensive. They only drop a handful of coins. The only effective way to buy all of the upgrades is to go to one of the towers where there is a big gold coin that will randomly give you up to 250 coins in one shot. Grab that and then you are absolutely set. The fastest method is to grab it, enter a house, leave and the coin will appear again. Keep doing this over and over until you have enough money to buy everything. I did this for around 2 hours and that was enough to let me beat the final parts of the game.

This is a game where you have to grind. Grinding is not bad, I tend to enjoy it but the problem is that this game was not really set up for it so as a result you have to do a whole lot of extra stuff. Meanwhile the boss battles can be a bit fishy as well and usually getting back there if you lose requires a lot of moving around. There is a “Continue?” option when you die but all it does is steal your coins and put you back to your last checkpoint. It’s almost always a better option to quit out completely and just reload your game instead.

This game probably needed a little more time in the lab to iron out some of the kinks. I think the beat em up approach was good in theory but the game probably went a little too hard in adding the grinding elements without building a true system around it. Even at max level I just barely beat one of the time trial challenges which almost felt like luck. I had to spam all of my best moves and even then I just barely made it. One thing that would have helped a whole lot would have been fast travel. Aside from the final boss area the only place to replenish your health and extra bottles is back at the main hubworld. These bottles are important because you can immediately replenish your health back to full with each one. These enemies take up a ton of health so you will want to have those bottles for sure. Without them you likely aren’t going to go far here.

That does mean that you will have to run all the way back to the hub world on multiple occasions and this is usually quite the journey. We’re talking several areas back which is sometimes over a whole chapter into the past. It’s not a journey that you really want to be making much but at the same time it’s not like you have much of a choice. So adding in a fast travel would have solved all of that immediately.

Overall, This game was probably just a bit too ambitious considering the budget. It can happen when you go too far in the wrong medium like the first Sword Art Online game that I played on mobile. There is a rhythm based aspect of the gameplay though which was neat since I’m seeing that everywhere all of a sudden. When you’ve dealt enough damage you get to activate your song abilities. It deals heavy damage to the boss but the timing is definitely tough so you will have to really get the hang of it. During the final boss I messed up quite a few times so the boss battle took forever. Make sure your reaction times are on point or you’re in trouble!