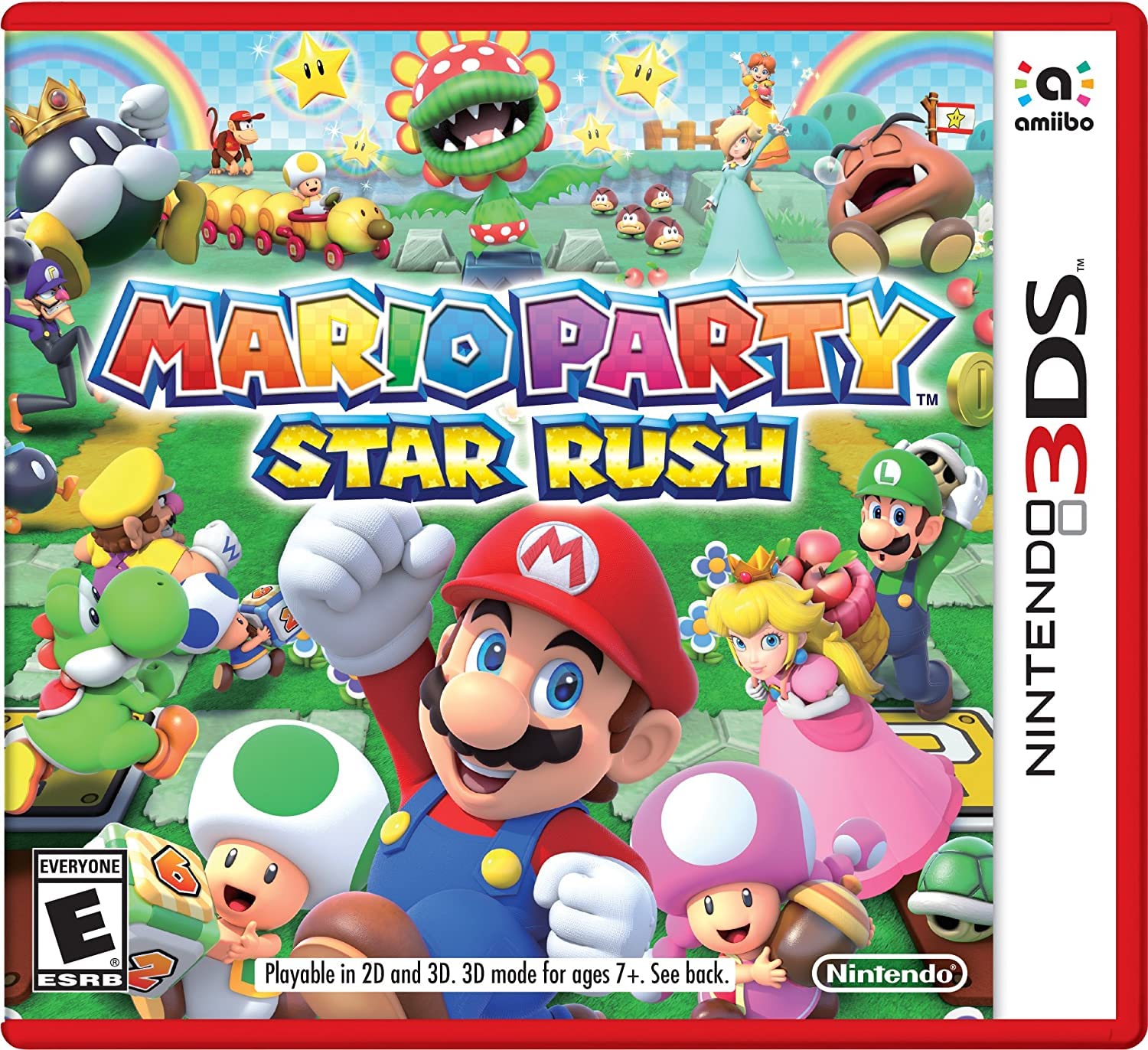 All right do you know what time it is?? It’s Mario Party time!! Yessss…well at least Mario Party used to be a super hype series like that. It really started to fall off slowly but surely as the games went on. Mario Party 4 is where the series peaked but I would say that Parties 5-7 were all still really great. It was in 8 where the cracks started to show and then beyond that into the Wii U era is when things really got fishy. I cut the portable games a little more slack in the sense that they usually don’t have any iffy gimmicks they’re just more limited by what the console can do. Star Rush not having any kind of a story mode is a little shameful though. Cmon you couldn’t give me anything? This one also introduces a gimmick that I’m not a big fan of. The game is saved by having a good amount of modes to play and ultimately it’s a good title.

So in the game the main party mode is something called Toad Scramble. Everyone plays as Toad and the idea here is to defeat 3 bosses in order to end the game. Each boss is holding onto the power star. Now here’s the kicker. No matter who bumps into the boss first, all 4 players are pulled in to enjoy the boss fight. The only disadvantage is that if you are rather far then it will take you a few seconds to join the fight as you see your character flying over. The character to do the most damage earns the star and getting the final hit gets you a lot of point. There are 3 different lengths to the mode so you can do 3 boss fights, 5, or one with an unknown number.

I’m not a big fan of the game trying to force all of this teamwork on you though. Can’t I just get the star myself? You also have to land on the exact space where the star is or you won’t get it. So unlike most of the games where you can keep on going, this means you will sometimes have to keep walking in a circle until you can grab the star. You are able to move backwards for once though which is interesting. You don’t have to just go forward like in the other Party titles. These two gimmicks just feel a little pointless though and don’t add to the experience.

There are no turns in this game so you also don’t get consistent minigames to play. Only happens when people bump into each other on the same square. There’s also a mechanic where you see Mario and friends scattered across the field and can recruit them. They all have different dice blocks and help you out during the fights. This one is an interesting idea at least although I don’t know if it was worth only having Toad as the playable character. Once you have the allies you can switch so they are the ones running on the field so I guess in a way it’s like an alternate way to play as someone else but that just seems a bit convoluted.

I wasn’t a big fan of that mode but there was another mode which was a lot of fun. This was the coin battles. Basically this is a one on one duel with another opponent and you are both put on a track and field course. A minigame will start and they all involve collecting a lot of coins. Each coin collected is one step closer to the goal and the first to 300 coins wins. As you get further into the mode the challenges get tougher and the amount of coins you need becomes larger but I really liked this mode. It was super fast paced and so something was always happening. It was a unique mode while also not feeling like it was just a gimmick that was thrown in at the last second. Oh yeah I definitely enjoyed that quite a lot.

There’s also a rhythm mode which I can’t say that I was expecting. You have to press the buttons in sync when the characters are playing classic Mario songs. It’s a fun test of your reaction times and is just a peaceful mode in general. It’s difficult to lose but it’s also really hard to ace them with an S rank because getting a single great instead of an excellent can be your downfall. Still, that was fun and so I give the game credit for having different modes like this. There is actually a reasonable amount of content for someone even without friends.

For example, there is a level up system here. You can exp for just about every mode like winning a Toad Scramble or a coin battle. Each level up tends to unlock either a new mode or a new character. I wasn’t at the highest level yet so I wouldn’t be surprised if there were even more modes that I hadn’t unlocked yet. It’s a nice feeling knowing that the adventure can still go on further. You can get this game for rather cheap now so it’s something you should really try to have on your radar. You definitely don’t want to miss out on it after all.

The graphics are really solid. It’s not surprising since this is Mario after all but it’s still worth noting. The 3DS does well with all of the characters looking crisp and of course the soundtrack is on point as well. This doesn’t feel low budget which is good. At the end of the day it’s hard to see people picking up this game instead of the home console ones but for the people who do play it, you want the game to be as good as possible.

Overall, Mario Party Star Rush is definitely different but it’s still a fun game. While the party mode may leave some things to be desired, the coin mode has you covered. It’s a lot of fun trying to grab a whole ton of coins and just getting through as quickly as possible. The minigames themselves are also really solid. I didn’t notice any that were really recycled and there were a lot of good ideas here. It does make me think about buying one of the ones that I’m missing one of these days. At this point there are a handful so I should probably start on that. Either way I would actually recommend buying this one. You’ll have a good time with it and won’t be disappointed.