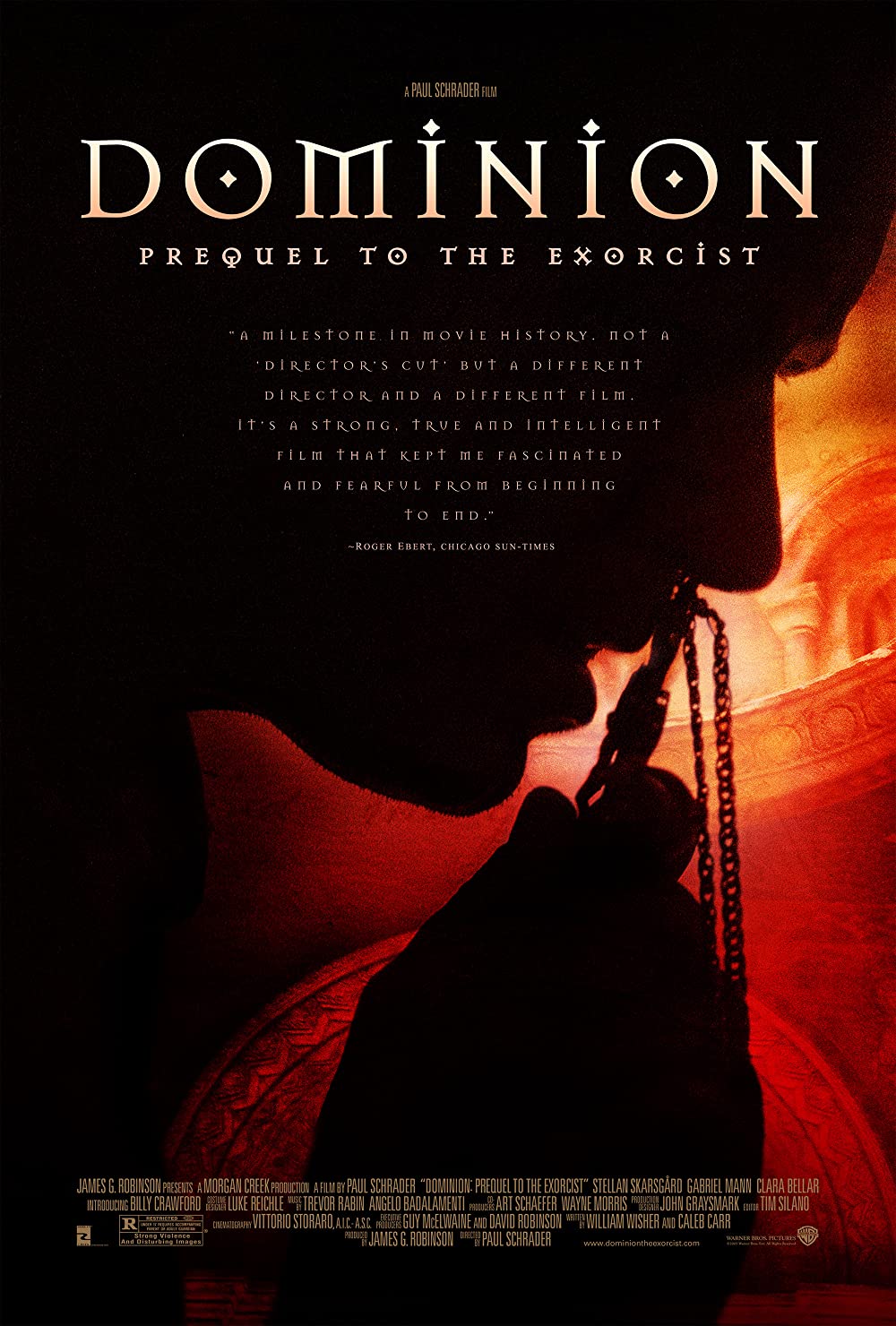 Wait we’re back to the Exorcist again? Not to be outdone by the third film, this one adds animal violence, nazi’s, and an evil tribe here to cause some trouble. Now I would say that the third film is nothing if not competitive when going to the bottom and still does end up surpassing this one as being worse but Dominion put up a good fight and nobody can take that away from it. There aren’t many exorcisms here at all as we’ve come to expect from the series since that was mainly focused on in the first but we still get a dramatic finish with a lot of yelling.

So the movie starts with the Nazi’s rushing in to terrorize a small village. First they make sure to break father Merrin by having him choose 10 sacrifices and it was all a cruel test to break his spirit and resolve. Merrin changed paths to being a travelling architect as he digs around in ruins that may have some religious ties. Well this time he is accompanied by Father Francis as the group is worried about Merrin. Turns out that they should have been worried about the whole village. See the temple was protecting them from the devil demon and now he’s here to destroy them all. He decides to inhabit Cheche, a guy who can’t really talk much and suffered a grave injury but is healing really quickly. The heroes are going to need to watch out now.

It’s hard to know where to begin with this one. Almost immediately when the film starts up we see a bunch of people torturing an animal to weaken him up for being a sacrifice and it reminds you of what a cruel practice that is. Any cruelty to animals is always awful and so right away you’re not really rooting for the village at all. Merrin and the translator Chuma try to defend the practice but to no avail. It’s definitely something that should be completely outlawed by force if necessary. There are animals dying and being injured throughout the film and that definitely serves to ensure that the film never gains any momentum. It is quickly stripped away whenever that may be close to happening.

There also aren’t many likable characters here at all. The only one who seemed decent was father francis but of course he is powerless to stop the demon. The holy water doesn’t do much and when he tries to read the scriptures he is promptly taken down. You would think that he would have moved faster with the water when the demon was waking up though. Just push his head into the water or something, don’t want and dramatically drop a few driplets on him. I always thought this is something the heroes should do more of, forget the small sprinkling and just chug a gallon of the stuff at him. It would be way more effective in theory.

Unfortunately a big part of the movie is about how the demon’s influence eventually catches up to everyone and that happens here as well. Basically just by existing the demon turns people evil and so the humans start to turn on each other. There’s this whole subplot where the British come in with an army and start shooting the tribe members to enact revenge on them. The divide between the two gets worse as the film goes on and then at one point a tribe member murders a bunch of kids so that they can’t learn from Father Francis anymore.

There aren’t really any winners here. By the end of the film everyone is really broken. There’s the main heroine Rachel who stays strong for a while but then also gets corrupted. One of the worst scenes for Merrin is when she shows up and effortlessly seduces him while he was on the trail of the demon. Not the best time to be tempted and you’d think that he would have held strong here. Well, actually I’m not sure how much confidence I really had in the guy to be honest but he still disappointed me there.

Merrin gets to sort of relive the past thanks to the demon and try some other things out but ultimately there was no easy way to get out of the situation. He definitely shouldn’t have sold the 10 people out though. It was a really bad situation but honestly the best thing to do there is make a play for the gun and hope for the best. Sometimes there are no perfect ways out of a scenario and you just have to try your best. By the end of the film Merrin gets his confidence back at least.

The character you probably feel the most sorry for here is Chuma the whole time. It’s rough being a translator because half the time you are having to translate messages that are no fun for anybody and as a result you’re in the line of fire now. If I was him I definitely would have gotten out of there real fast after a while. Unfortunately there probably aren’t many opportunities in the area so leaving is a risk all on its own but anything surely has to be better than staying there right? At least it feels like that would be the case.

This film does remember that it’s supernatural and isn’t trying to hide it most of the time like in III so we do get some decent visuals at times. The green light as everything got trippy near the end was pretty intense. I also liked the clock that appeared in one scene but I have to admit that the effects were so bad that the scene was unintentionally a bit funny. Just a bit mind you but I was starting to crack up. It just made for a really funny visual even if that was not the intent.

The demon’s final form was also the opposite of intimidating even when his face would turn pale like a true demon’s. It’s just not easy to take him seriously as a great villain but they never are in these films. If the characters would just grab some guns and rock the guy you feel like he would go down. Temporarily I suppose since you can never seem to truly get rid of them.

There just isn’t much to enjoy here as with the other Exorcist films. The whole thing is so dark, dreary, and relentless. The heroes don’t have much of a chance at stopping the demon for a while because they don’t even know that they’re fighting one. By the time they do there are so many dead bodies that the heart of the village is gone.

Overall, This is another film to avoid for sure. An exorcist prequel just didn’t need to exist, much less two of them. At least this one has a decent ending, in fact I would say it easily beats the rest since it’s actually happy if anything. I suppose that’s the benefit of being a prequel since you can’t just bump everyone off or ends things rather grimly. I suppose they could have and suddenly the film wouldn’t be canon but that’s a very risky move at best. In theory it’s all uphill from here but we’ll see if that’s actually the case or not for the series.