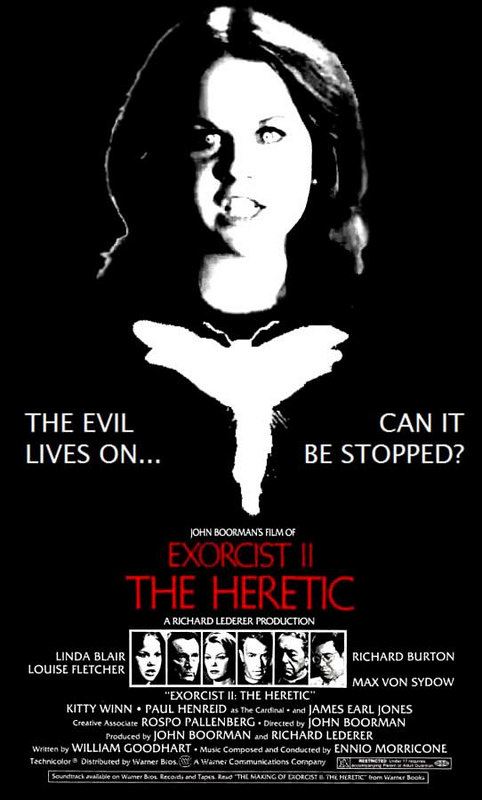 Who here remembers the dumpster fire that was the Exorcist? Well it ended up getting a sequel. That’s pretty unfortunate in and of itself but then this film is so scattered and nonsensical that you have to wonder how it ever made it past the production phase. This film certainly didn’t do much right, but then again what would you expect? Lets take a look at the Heretic.

The film starts with Lamont getting ready for a new mission. The church wants him to check up on Regan to see what the situation is. However, they don’t want to be bothered with the specifics so if there’s anything wrong with her then Lamont needs to ignore that and give them the okay. Essentially sending him is just a formality and they want him to be aware of this. Lamont isn’t okay with this, but then demons possess him and tell him to destroy Regan. He can’t resist their influences. Can anyone live through this?

Well, one big issue here is a similar one from the first film. The priests look super weak here. The demons seem to have all of the power at their disposal while the heroes can’t do anything. If even the priest is getting mind controlled with ease then what hope do the other characters have? None, that’s what. The demons basically just toy with the main characters a lot until they grow bored and allow themselves to be destroyed. It doesn’t make for a particularly engaging synopsis I must say.

Regan actually seems to be doing a much better job of resisting the demons than the people who came in to help her. She only gets possessed when the heroes put her in the telepathy machine which allows her to see the past. How such an invention even came into being is quite suspect on its own so lets pretend that we didn’t see that. The scenes of them mind melding are pretty boring and every time the characters use this ability it ends up backfiring anyway. Why would they want to open a portal for the demons to come through?

Then you’ve got the annoying subplot where Lamont is going crazy. He starts losing his grip on reality such as when he imagines a scientist to be an old monk with some interesting powers. Naturally he dies by getting stabbed in this vision. Then he gets to ride through Africa where a swarm of locusts destroy everyone. That was in the past and it ends up tying into the film by the climax, but at that point you’ll have seen the same clip so many times that you will be bored out of your mind. If it’s one thing that this film loves, it’s stock motion. You’ll see the same recycled clips many, many times over.

The film shouldn’t have tried to keep going back to the past to explain the present. There’s just no point to it. Then you’ve got Regan’s psychiatrist who tries her best to help the kid, but naturally a demon is a little above her pay grade. Unfortunately she is travelling with an assistant who is highly susceptible to the demon mind control. Although as already pointed out the demons can mind control whoever they please so things wouldn’t have changed a whole lot otherwise. She was effectively just the fall person this time. Still makes for an annoying character though.

As you can probably expect the film is pretty violent as well. It’s not quite as gruesome as the first film where it was just hard to look at any of the characters, but this one’s still no good. You’d want to avoid it on this alone, much less everything else. None of the characters are any good with the exception of Regan who isn’t great either since she can be rather vague and scattered. It’s hard to trust her because of how she acts even if she does mean well.

Then we have the villain Pazuzu who isn’t particularly memorable. He’s basically just a very generic demon who is willing to do anything to get the last laugh even if it means degrading himself. There’s nothing interesting about him at all. The demon has absolutely no character and is basically just a waste of time. Couldn’t the writers have at least given him some kind of interesting sub-plot or character motivations? Nah…I guess I can’t say that I was surprised.

Overall, what I can glean from this movie is that it didn’t need to be made. There was no reason for an Exorcist sequel and the movie writers knew it. That’s why there is barely a plot here as the demon just wants to rise and fight but doesn’t even know why. All it does is try to make the Church look bad with how the cross and spells never work on the demons. They always just end up laughing. The film could have gone for an interesting Venom route where the original demon has grown attached to Regan and wants to protect her from other demons, but that’s too clever for this series. We also don’t need to humanize demons like that anyway so it may not have worked either way. That’s just more evidence that in general this film just should have been a reboot or something instead. Give the franchise a clean slate and maybe even improve on the original. It’s certainly possible and I think that would have been the optimal route. So, if you want to see a good horror film I’d suggest checking out something like Ghost Busters instead even if it’s basically more of a comedy film.