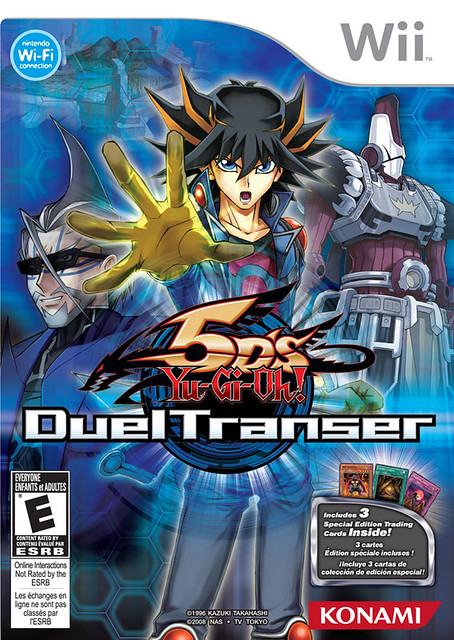 It’s been a while, but I finally got to go back and complete one of the old Yugioh games that I’ve had on the back burner for a while now. It feels good to finally take it down for the count. It suffers from the usual problem that Yugioh games have on the home console and that’s the long loading times. Still, that’s really the only main problem for the title as it still does a good job of capturing the Yugioh enjoyment that I’ve come to expect from the series. It’s long and it’s difficult, but the game can also be very satisfying. After all, what’s more fun than having a quick round of Yugioh?

This title also does have a plot which is something that you can’t really say for many of the other Yugioh games. Where this takes place in the anime is a little vague, but all that you really need to know is that many of the world’s greatest duelists have been trapped inside of a large tower. The only way to get out is to duel everyone and prove yourself to be the strongest. The problem is that there are no pushovers here and some of the villains may decide not to play by the rules. You control an original character who has arrived at this tower. He may not have a rep yet, but he is actually the greatest duelist of all time. Not too shabby eh? Can Terry (That’s what I called him) save the world or is he doomed? Time to find out!

We may as well go over the technical aspects of the game first. The graphics look fairly good here. Everyone is a little pixelated, but in retrospect, a lot of the Wii games had similar issues with the character designs. It still looks rather well considering. I also liked the designs for the new characters. They stood out and were original. Odin had a cool armor and his true identity was also pretty intense. That definitely worked well for the final boss. As for the soundtrack, it is fairly solid. A theme will come up if you are close to winning and likewise if you are close to losing. There are quite a number of good tunes here although the soundtrack definitely could have been larger. It’s mostly all fast paced and fits well for the duels.

Time to quickly explain the gameplay system in case you have never had a duel before. Each player starts with 5 cards and then you draw another one each turn. You summon monsters to the field (1 per turn although you can special summon others) and use them to attack your opponent’s life points. Spell and Trap cards are also allowed into the mix of course. The first person to land at 0 life points loses the round. The concept is simple enough, but there are many rules and complexities surrounding this so you’ll still have a lot to take in when you first boot up the game. I recommend working on building your first deck to start things off. Choose each card yourself so you know exactly what they do and when to activate each card.

I recommend holding down the B button during the turns if you know that you won’t be using a Trap Card. Otherwise, it will ask you this question throughout every phase of the turn, which can slow the game down considerably. I ended up going with a deck that was heavy on trap cards and anti trap cards. My deck was a little larger than most people would recommend it be, but this served me well twice. There is one character in the game who has an incredible defensive strategy. Her name is Luna and she won’t hesitate to time you out. Our duel went into the 80s I believe, but luckily my deck was a lot larger than hers so that ended up earning me the win. She tried the same tactic later on and I used the same counter. Don’t underestimate trap cards. They are extremely valuable in this game.

You will need to really enjoy the duels to get any fun out of this title. That’s because the game is over 20 hours long and that equals a lot of duels. There are roughly 13-15 levels in the game, but each one has up to 5 duels and sometimes even more. You also shouldn’t expect to coast by either as these guys tend to put up quite the fight. Many of them took me several tries to defeat, but naturally none of them could ultimately stop me from reaching the goal. Ironically, the second last boss is probably the easiest in the game. I happened to get a really good hand, but even considering that, a perfect 8000-0 battle is pretty rare.

As for replay value, there is a lot of that. After beating the game, you will unlock a few more levels where you can fight opponents with incredibly strong decks and get more cards. There are hundreds, if not thousands of cards in this game so collecting them all will be a very tough thing to do. That is sure to buy you a lot of time. One thing that I don’t like is that you can’t use some of the cards that you obtain because they are deemed illegal. If that’s the case, why put them in the game at all? Even if the computers keep on using them anyway, we shouldn’t be able to buy those cards if they are just going to sit around.

The gameplay’s a lot of fun as you can tell, but the game did have one thing holding it back. The long loading times. I can’t stress this enough. If a game takes a while to get through each duel, then the adventure will start to feel a little too much like a grind by the end. For some reason, this always happens to the home console version of these titles. The DS World Championships and the PSP Tag Force games are always lightning fast and I dare say that they are more intuitive. After all, in those games, you could activate magic cards whenever you want. Now, you have to wait until it’s your turn.

Overall, It feels good to have finally completed Duel Transer. That game was certainly on the backburner for a long time so this is a big moment. Next up, I aim to take down the Yugioh game for the Gamecube. The plot is definitely very odd (and boring) and the game is even slower paced than this one. Ah well, we’re just going to have to wait a while before we get a really fast title I suppose. At the very least, this just goes to show how popular Yugioh is. It’ll always have more games to play. If you’re a big fan of Yugioh, then I definitely recommend this game quite a lot. You may never get to Synchro Summon since the rules seem more complex than usual, but at least you’ll get to fight many powerful foes. If you’ve never played Yugioh before, then you may want to start with World Championship instead as it does a good job of easing you into the challenge.