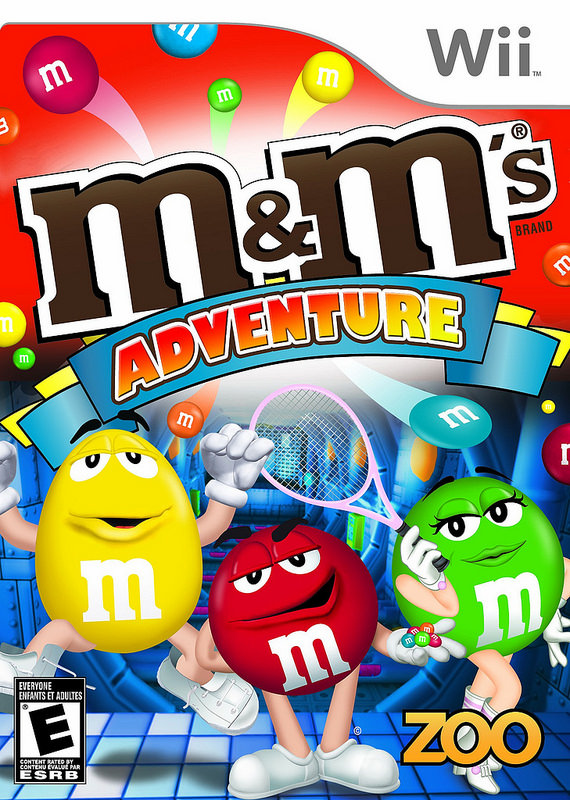 It’s time for another game in the M&Ms saga. The previous ones weren’t all that bad. The DS game’s gameplay was pretty interesting and you can’t really mess up a racing game. This was the first one to be a full platformer though so that naturally came with some considerable risks. It has quite a few glitches and plays out like a slightly higher budget version of Ninjabread Man at times. The game definitely makes some mistakes and I’d have to call it a bad game. It’s not on the same level as some of the other disaster titles, but it makes enough of the wrong moves to sabotage itself like having to replay a whole chapter if you lose. Lets dive in!

The game starts on Christmas Eve as the M&Ms are getting ready to lock up for the night. Unfortunately, a security breach occurs and all of the M&Ms are stolen. The heroes have to quickly re grab all 120 of them before leaving, but they are now being guarded by a Snowman who likes to yell “Its hot”, The Easter Bunny who is very hungry, The Nutcracker who wants to blow everyone up, and the Halloween Man who is trying to scare everyone. Fortunately our brave heroes won’t back down when candy is on the line.

The gameplay is very straight forward. It’s a 3D adventure that “should” play out like a Mario game. You move and jump as you cross the level. Getting to the end is your destination, but not the goal. You must find all of the M&Ms in each level or else you’ll have to replay it anyway. Each level has 3-4 areas which can be as large as an average level in another game. You must beat them all without losing all of your lives or you’re sent back to the beginning and you’ll need to grab the M&Ms again. That is definitely the most annoying part of the game. Most of the levels aren’t all that difficult, but the last 2 are tough. There is a huge jump in difficulty between levels 2 and 3.

Level 3 has you go through many jumps with metal birds trying to peck you along the way. It seems like you can possibly step on them or lure them to a bomb, but it’s much harder than it looks. With enough repetition you’ll get through it, but the levels can be long so you don’t want to have to replay them too much. Fortunately to counter this, the bosses are incredibly easy. The only one that is even a little difficult is the final boss which is also very generous with health bits everywhere. For the Cupid you just have to hit a bunch of switches. Taking down the Bunny just means luring him to candy and you lure the soldier to poison smoke. You lure the Lantern to bombs and take out the Snowman by hitting a lot of switches. Either the developers didn’t put too much thought into the bosses or they just didn’t want to make them too difficult. Imagine having to go all the way back at that point.

There is one part of the game that is just unfair though. In Green’s last level there comes a point where you have to board a boat as cannons shoot at you. The problem is that you die instantly for no reason. It’s possible an unintentional glitch in the game or something, but that’s it..you’re done. The only way around this that I found was to just jump in the ice cream and swim to shore. It takes up a lot of health, but at least I lived. I wasted a lot of lives trying to figure out why I was dying though. It would be like an invisible energy blast hit me or something.

Fortunately the game has so many glitches that you can exploit them as well. You can jump on air to skip parts of levels by just mashing jump and you can also achieve infinite lives. The way to doing the latter is getting a lot of coins like 98 for example. Then you reach a checkpoint. After that you grab the final 2 and keep on going. You get the extra life from this and then even if you die, you’re brought back to 98 coins at the check point. Since the coins reset despite the life sticking around, you can keep on getting lives forever. Figure out what section it the toughest for you and do the coin trick at the nearest checkpoint. This helped me a lot in the Snowman level. Hey, if the game is going to pull out cheesy tricks to stop me from winning…then two can play at that game!

The graphics are nothing special, but they get the job done. You can always tell what is happening and the level designs are pretty clever. The Christmas levels have the best designs for sure, but the Halloween level is surprisingly spooky as well. There are creepy portraits everywhere and even the music feels rather dire for the heroes. I think they put more effort into the soundtrack and levels than the gameplay so their priorities may have been a little mixed up. It was fun hearing Jingle Bells and Sleigh Bells ring at the end. It helped show that the developers cared about this game at least a little.

There isn’t any replay value here though. Once you gain the 120 M&Ms you are completely done with the game. That’s the end of your adventure and it’ll be time to put the game back in the drawer. The campaign isn’t all that long, but it is artificially lengthened by having to play the same levels as all 3 characters each time. If you ask me, you shouldn’t have to collect all 120 M&Ms to see the ending. That’s like having to grab all of the Stars in a Mario game. It’s something you should want to do, not something you have to do. Mix that in with the tedious nature of having to replay levels while looking for M&Ms and the game definitely gets hurt quite a bit.

There’s also a glitch where you’ll turn invisible if you try to approach the M&M machine. I guess the game won’t even let me look at the cool candies that I’ve collected eh? Well fine, I didn’t want to look at them anyway. I should quickly mention that each M&M has an ability. Red can fly whenever you see a flight symbol, Yellow can double jump, Green can swing her tennis racket whenever she finds a tennis symbol. Red’s flight levels are the best part of the game so I wish they had appeared more. It was certainly better than the main part of the game.

Overall, This game had a lot of potential, but the gameplay’s just a little too weak. You know there’s a problem when some levels are purely luck based. I almost died at the very end with Green because you have to dodge falling rocks for about 3-4 minutes. I barely survived and since I had 0 lives left that would have been fairly upsetting. I do like the challenge at times as some of them can be fair, but then we should get more lives or every stage should be its own level. That would fix a lot of issues. I died a lot of times on the revolving Ice Cream door which is easily the toughest part of the whole game. Seriously, just try to get out of that one in one piece. It can hold its own with some of Mario Maker’s toughest levels. Having to go back all the way is just too much of a detriment. The game is only about 5 dollars so if you want a real challenge it’s worth taking a look. That being said, it’s not always fun to play and games should at least be fun. I’ll have to give this one a thumbs down and I recommend Mario Galaxy instead. Even the ending was very lackluster.