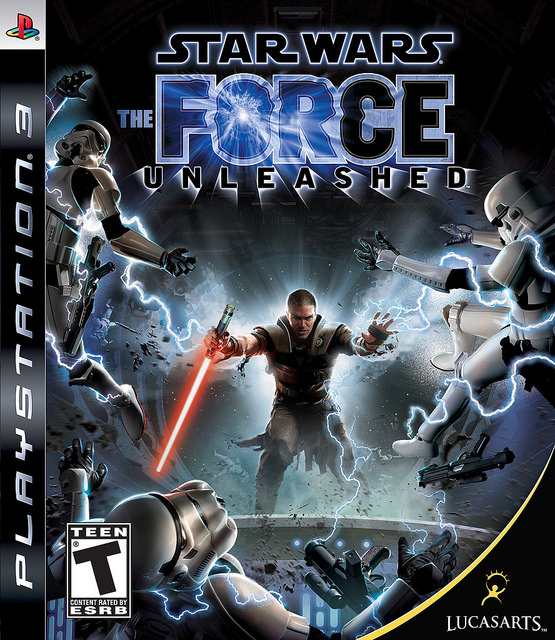 I’ve been waiting to play this Star Wars game for quite a while. It got a lot of hype when it first came out and I’ve owned it for quite a few years but was blasting through the older games first. While the gameplay may not have aged incredibly well since it first came out, I quickly got into the swing of things and enjoyed the game quite a lot. Ironically the beginning of the game was more difficult than the second half of it since the upgrades really helped to change the course of battle. I just wish I had realized that I wasn’t logged in to my PSN because of some network issues as I missed out on the trophies. I’m still a little salty about that. With this review done, I’m also ready to begin the sequel to see how it improved upon the original!

The plot focuses on a young padawan named Starkiller. Darth Vader decided to train him as an apprentice in the hopes that the two of them could team up to destroy Palpatine. To this end he has Starkiller go around hunting Jedi to improve his abilities until he is ready. The problem is that Palpatine becomes aware of the plot so Vader has to take some drastic measures, but this ends up being a fatal mistake by the end. Honestly, Vader should have just taken the opportunity and fought right there. That definitely would have been his best chance.

The gameplay is 3D where you have total freedom to use The Force, Shoot Lightning, or attack with your Lightsaber. It’s one of the best gameplay styles out there and it was cool to play it. A lot of games like this I don’t really get to play like Infamous or Grand Theft Auto. You can level up the skills and get a lot stronger during the game. By the end you can really feel the difference in your abilities which was handled really well. The boss you had trouble with at the beginning is nothing more than a minion by the end. Now that’s what I call character progression.

One issue that I do have with the title is the lock on feature though. It’s really not helpful as it always locks on the wrong thing. You tend to miss with your attacks as a result at times which can really be annoying. You learn to work around that by the end, but the gameplay just could have been a little more polished in this angle if you ask me. I shouldn’t have to work around it. I’m sure this will be fixed by the end though.

The game is reasonably challenging, but it’s not unfair. You get to keep your EXP from the minions so just keep retrying the level until you win. Use strategy and try different tactics, you’ll get through eventually. I had some trouble with the first mini boss but it all went well after that. Once I had mastered the controls, it was on to the races. At only 9 levels the game is a little on the short side, but it should still last you about 4-5 hours. There is also some good replay value in finding all of the collectibles and obtaining your shiny Platinum Trophy. It seems like a bit of a grind as well as being reasonably difficult so it should take you quite a while to grab them all.

The graphics are really good and the game spared no expense with its cinematic cutscenes. The game feels like a big movie at times without limiting the gameplay. You have a good amount of quick time events for all of the bosses which always adds a thematic element into the mix. This is really the definition of a AAA game and we need more Star Wars games like this one. The soundtrack is also on point with most of the iconic film themes making it into the game. I can’t say much for the original music in the game as the film ones are the only themes to really stick out.

Starkiller is the protagonist here and he starts out as an evil follower and eventually becomes a hero. He even makes the tough call at the end to spare Palpatine instead of destroying him. Same for Darth Vader. He may not be quite as intense as I thought he’d be, but he’s pretty solid. I like him more than Luke Skywalker and some of the other Jedi. He probably is one of the best Star War Jedi either way though if that’s any consolation. He reminded me a lot of Cole from the Infamous series. I definitely also think that he’s one of the most powerful Jedi as he was able to hold his own against Vader and Palpatine, no easy feat.

The rest of the supporting cast was all right. The main heroine was good and took the plot twists in stride. The only character who was annoying was the blind Jedi. I believe Rogue One’s character was basically taken from this one. While he technically gave some good advice like telling Starkiller not to destroy his opponents, he was incredibly weak for a Jedi. He spent the entire story getting beaten up and being a liability. Starkiller actually could have made it through this game if not for him.

Still, it was an epic story no doubt about that. This could easily be adapted into a movie and I think it would be a really epic one. The cutscenes are movie quality as it is and the story could easily fit into the universe. Vader’s whole plan maybe felt a little extra convoluted and training Starkiller so well may not have been a good idea, but it made for a good excuse to have a character be so strong. I imagine Vader would be a pretty good teacher since he is so ruthless.

Overall, The Force Unleashed absolutely lived up to the hype. The only thing holding it back from a 9 is that the camera work/lock on feature is a little too unreliable and the game is perhaps a bit too short. There aren’t any real negatives, but to get to the 9 Star rating you just need something extra. Perhaps the sequel will be able to make it all the way up there, but at an 8 it is still a great title that you should get at all costs. If you’re a Star Wars fan, you’ll be able to appreciate the game all the more. It lets you utilize every Jedi/Sith power seamlessly in the gameplay. You’ll feel like The Force is with you.