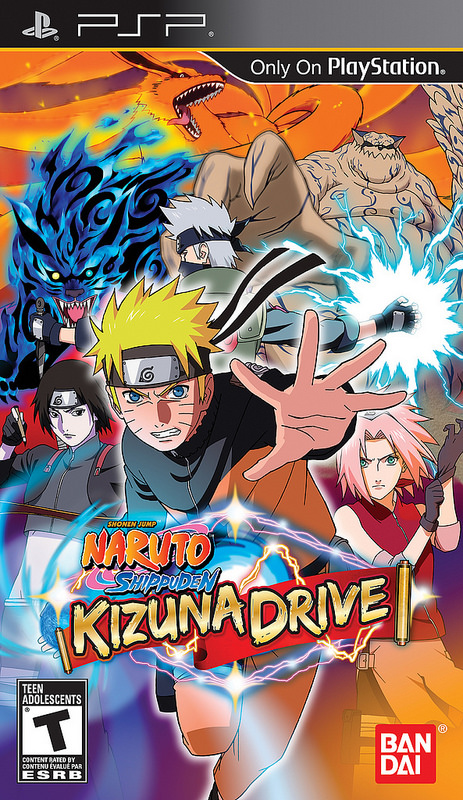 It’s time to look at a Naruto PSP game that I have owned for many years. It’s really been sitting in the closet for a long time, but at long last I got to finally complete it. It’s certainly one of the weaker Naruto games thanks to several game mechanics that hold it back. It’s a shame because you can see the potential lurking in the background, but in the end it simply wasn’t enough to make the game as solid as it can be.

It has an original story where Naruto is framed. The Hidden Dreams village believes that he transformed into the Nine Tails and destroyed it, eliminating the leader of the village in the process. As such, they have decided that it is time to destroy Naruto and the rest of the Konoha ninja once and for all. Naruto has to defend himself and take these guys down at the same time. Meanwhile, Sasuke and his allies are closing in on Itachi. They won’t take kindly to anyone that gets in their way. Who will come out on top!?

First off, I’ll give the story kudos for being pretty interesting. The original characters weren’t all that bad. There were 5 new characters. Enzo, the leader of the group for the majority of the game was fairly decent. He wants to avenge his village and leader which works well enough and his design isn’t bad. He makes for a good opponent. Two of the weaker villains were Taiso and Yomito. I didn’t care for either one of them since they never felt all that formidable and you knew that they were going down. While all of the villains were gullible, their individual personalities just didn’t help their case at all. Ryuka easily had the biggest role from the villains and was willing to make the ultimate sacrifice to bring in the Three Heads monster to destroy the world. The heroes were definitely nervous about fighting such a beast so it was a fairly good move. Of course, Ryuka was also being manipulated by the ultimate mastermind. She would probably make for a pretty good hero to have around.

The big villain behind the shadows was fairly generic. He’s old and presumably wise so he strings everyone along with ease. He doesn’t play around, but his end goal makes it feel like he was since he didn’t really think it through. Even with the 3 Heads, I don’t see him destroying the world since the main characters defeated him pretty easily. If they had lost then the Akatsuki would have done the job themselves. He’s pretty good at getting the cheap shots in, but that’s really the extent of his abilities. Without the monster, he wouldn’t have stood a chance.

I have to give the game some credit on the cutscenes though. There’s not a whole lot that you can do with still shots for the most part. This game does everything it can to make them exciting despite this. You have a lot of quick cuts through the images and sharp sound effects. It can also be pretty funny since the game takes itself so seriously the whole time, but I appreciate the effort. Most games would have settled to have the images stay on screen with dialogue but nothing happens. This one at least simulates an actual fight.

The soundtrack is also pretty decent. The themes are certainly limited, but they’re catchy and memorable. I doubt you’ll be forgetting the themes anytime soon once you start playing the game. I would have liked more tunes, but as a whole I feel like the budget for this game was incredibly low. You can see this through the gameplay as there are only a few different bosses and minions. They all end up being reskins that are copy and pasted from each other. It’s pretty lazy and also very noticeable by the end. It makes playing the free missions not quite as fun. At least the game did scrounge together enough budget for an intro and end song. The lyrical song was done very well and at least ended the game on a high note.

What hurts the game is really the gameplay. The actual style isn’t bad as it’s your average 3D fighter. You get one attack button and one for jutsu. You can mix and match the two to use various combos. Dodging and platforming also come in handy. There are no level ups in this game, but you do get scrolls after every mission which amp up your stats. They are incredibly useful and I believe mandatory as well as completing the game without a good set of scrolls would be impossible. Here’s where the game goes too far though.

The bosses have massively large health bars which go down at a very slow rate. It just keeps on crawling and crawling. The levels give you a full 30 minutes to fight the level and in two of them I nearly got timed out by the villain. Levels shouldn’t be that long if it’s a small circle where you just keep pummeling the boss and he won’t go down. The only way to put yourself in a better position is to replay old missions to get better scrolls. The problem is that if you go too far back then the scrolls will be really bad and not useful but if you do the mission that you just beat then you’ll barely be able to beat it and it’ll take a while. Naturally you have to do the latter, but it just feels like artificial padding when you have to beat it again.

There are the free missions you can do instead of the scenario ones to earn the scrolls, but it’s a grind all the same. It took me a while to get past some of the early bosses for that reason since through RNG I kept getting underwhelming scrolls. Towards the end of the game I finally got really good ones that carried me through the game, but it took longer than I would have liked. The A.I. doesn’t help either since it feels like your allies are programmed pretty badly on purpose at times. They attack and heal you as you fight but often times they won’t get out of the boss’ attacks and will get trampled. Once they are out of the way it’s up to you and you won’t be able to deal enough damage. Some bosses also cannot be harmed like the Beetle that you have to trick into crashing into a tree (Which your allies will try to prevent) or others that you have to knock down. These are easily the worst bosses since it takes forever to beat them. I much prefer the opponents that you just fight until you get their health bars to 0.

An easy fix that could have helped the game would be to make the ninjutsu stronger. You know there’s a problem when it’s usually better to spam your normal attacks than to use any specials. Only Naruto had two really great attacks which I spammed forever. The other characters were completely out of luck so I always got worried when I had to play as another character. I couldn’t even look forward to playing as Sasuke. At least Kakashi’s level went by quickly since for some reason Itachi couldn’t fight back. I feel like it was a glitch but it’s possible that they just didn’t program him very well. It’s definitely a real possibility.

The game just padded itself out as long as it possibly could. I ended up finishing the game after around 14 hours and since it only had 17 levels, that’s pretty scary. I wish I could say that the grinding was fun, but since every level is effectively the same and they’re all so long, it definitely wasn’t the most enjoyable experience. It’s hard to see myself going back to this one. Technically it did have a lot of replay value though. You can go back and try to beat the rest of the Free Missions. There are a bunch of other jutsu, ninja tools, and one other thing left to collect that I can’t think of at the moment. Getting all S ranks in the game might help to unlock something as well I’m sure.

Overall, This wasn’t a bad game, but the padding and poor game design prevents it from being quite as good as it should have been. The gameplay and levels were extremely limited and the bosses were poorly designed. Having to try and get new scrolls to get through the game is already bad, but making them completely luck based is even worse. It prevents the combat from being fun when it really should be. It’s a shame since the story is really good along with the visuals. The graphics are on point during the gameplay and cutscenes and the music is memorable. I’d recommend this game, but only after you’ve played all of the other Naruto games and you want something fresh. Otherwise, they’re all more polished than this one is.