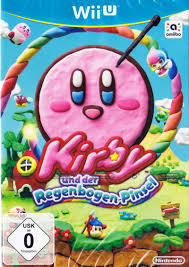 It’s time to look at one of the latest Kirby games. It has been quite a few years since it came out by this point, but it feels fairly recent to me. This Kirby game took the unique approach of acting like a DS game. The Wii U does have a stylus after all, but it’s easy to forget since most games wisely stayed as far away from this mechanic as possible. Unfortunately Nintendo didn’t learn this lesson quite as readily which meant game over for them. I’m afraid that this is easily the weakest Kirby game that I have played and it just fails to capture the charm and essence of the series. Kirby himself does look fairly good though.

The game starts off with Kirby relaxing and just trying to have a good day when a villain appears and blasts the entire planet with an energy attack. Even Kirby couldn’t react quickly enough to dodge and at once time stopped for everyone. Fortunately a fairy freed Kirby and our protagonist returned the favor in the next scene. The two heroes decide to team up to save the planet and that begins our adventure. Enjoy the opening cutscene since we don’t get another one until the very end of the game. Was this game fairly low budget? I would say absolutely!

Aside from the lack of cutscenes (Because Nintendo isn’t exactly known for them anyway) this game takes a lot of shortcuts. The most obvious one is the reused bosses. There are 7 worlds which each have 3 levels and then a boss fight. Worlds 1,2, and 3 have the same bosses as 4,5, and 6. It’s not something that you would expect from a AAA Nintendo game, but maybe this one was only AA. What supports this theory is the game is only 3 hours and 32 minutes long. That’s considering that I left the game on while grabbing lunch and I would pause it whenever I had to leave the room as well. It’s just a very short game and you could probably decipher that yourself. Each level is around 5-6 minutes tops with some being shorter. It’s a fairly easy game so not dying will also speed things up.

A game being short isn’t really a bad thing, but if I had bought the game at its original retail price then I certainly would have been a little disappointed. Maybe Nintendo has just thrown in the towel though. Star Fox Zero was also incredibly short and likewise for Star Allies. I guess unless you are Mario or Link you can’t expect too much. Still, it would probably still get the usual 7 stars as with most Nintendo games, but what really hurts this one is the gameplay.

You can’t actually move at all. To control Kirby you have to draw a path for him with controls that bring you back to the Wii days. Kirby will refuse to get on your path unless it is perfectly straight and even then he has a tendency to lose his balance and momentum. He has a few different forms like a Tank and a Rocket, but those all use the same controls. I didn’t buy a Kirby game to draw, I bought it to cheese the levels by floating over all of them. That isn’t an option in this game and I have to question the rationale behind this. It just doesn’t seem like a good gameplay idea if you ask me. It gets old after a level or 2. Then you’ve also got the fact that a lot of the levels are auto moving levels which hurts a bit since you have to wait at their pace. Some of those levels I could play with one hand for a bit or do some stretching while I was waiting.

I did die a handful of times during boss fights thanks to the controls though. It never feels earned though and just cheesy. I would proudly blame the gameplay style for each of my deaths. Even though we got the solid cosmic battle at the end as in most Kirby games I couldn’t enjoy it as much because the design of the fight was no good. You have to rely on a lot of RnG to take him down for the count. All right, I think that’s enough about the gameplay so lets go into some of the more positive aspects of the game.

There is a reasonable amount of replay value here to make up for the short length. You can play Challenge Mode which gives you a reason to replay most of the stages. There are also treasure chests in each level which allow you to get the collectibles. There are a bunch of figures and music themes to grab as well as Diary pages which will tell you a bonus story. Grabbing all of the collectibles will take you a reasonable amount of time without making the mistake of being a big grind. All in all, if you decide to 100% the game then it will have awarded you enough content to justify the purchase.

The soundtrack in the game is also pretty good. It doesn’t have any themes as iconic as Battle Against Nightmare, but was still as good as a Nintendo title should be. The final boss theme is solid and the normal level themes are engaging. The graphics are also nice and bright as they should be. They are certainly a step down from some of the previous Kirby games thanks to the dicey decision to make Kirby a ball the whole time and the stop motion esque effects for most of the cutscenes, but beyond that you can tell that it’s a modern title.

I also have to give some kudos to Kirby himself and his role in the story. He looks pretty brave and strong throughout the opening as he dodges a laser blast and saves the fairy. You can also feel the emotion behind his character as he glares at the final boss. Kirby is definitely a fun lead and while some games can play up his childlike nature too much, this one didn’t. He took all the plot twists in stride. Kirby is all business in the climax. I didn’t care about the fairy plot much, but it’s not like it got almost any screen time to be honest so she was just around to jump start the plot. I didn’t even realize that there was something in the plot for a twist until it happened, but I guess it was good so that we could get a true final boss.

Overall, Kirby and the Rainbow Curse is a fun game in every area except the gameplay. Unfortunately the gameplay is tedious and repetitious. It completely gets in the way of what the Kirby games are usually about and I do have to take a star away. One thing that I love about the Kirby games is just flying to the top of the screen and getting to the end of the level. You can’t do that here since the game controls where you go and your paintbrush runs out very quickly. It’s unfortunate, but if you don’t mind the idea of drawing or even like the concept for a Kirby game then this is the one to check out. Regardless it isn’t a bad game, but I would sooner recommend grabbing the rest of them.