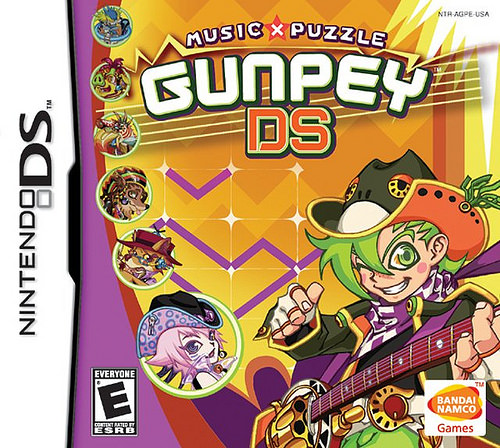 It’s time to look at one of those random puzzle games that I’ve had in the backlog for quite a while. I’m a pretty big Professor Layton fan so I was ready for some more puzzles. The problem is that Gunpey’s design seems to be a little too based on luck. Of course, the more you play the better you will get at recognizing the patterns and it isn’t all luck based, but it does play a factor. This game also has no way to delete previous save data so if you get a copy where part of the game has already been completed, you won’t get any kind of tutorial. That’s probably the roughest part since you have to learn on the fly. It took some time, but eventually I was able to get good enough to conquer the game. There’s some good entertainment lost in this game, but finding it is too much of a hassle.

The game’s main mode is essentially it’s story. It works like an Arcade Mode as you fight 5 opponents in a row at the ladders. If you beat them all then the credits role and you will unlock a new character. Rinse and repeat if you like to get them all. You are able to use the continue feature as much as necessary (I presume…I only died once during my big victory round) so no pressure. The story will take you around 15-20 minutes since there are no cutscenes and reach round is around 3-4 minutes. Since this game is about being the last man standing it all depends on when the A.I. loses.

Lets talk about the gameplay. So both players have a field with 5 columns and a bunch of rows. The screen moves upwards as the match goes on and you can also speed it up although I recommend never doing this in story mode since it just accelerates your own demise. It’s only good to do that to get a higher score if you’re doing the Score Attack mode or Endless. You have various shapes appear in your board as it rises. There seem to be 3-4 kind of pieces. The idea is to get them to connect across the entire board. Once 5 pieces are connected they all explode and you keep on doing that. Whoever lets a piece make it to the top of the board first loses. Adding to the strategy is the fact that you can’t move pieces horizontally, only vertically. That’s where the luck part comes in as sometimes the right piece won’t show up in the final column until it’s too late. If you want to beat the main campaign the best way is to simply go as slowly as possible.

You can control the board in a few different ways, but using the stylus is easily the quickest and most efficient way if you ask me. It sounds more complicated than it actually is. Once you understand the purpose of the game then the rest will quickly fall into place. You better enjoy the gameplay though because there isn’t really anything else to it. Of course that can be said for many games, but this one just feels like it’s lacking in content. Once you beat all of the stories I suppose you can go back and try to get high scores in the other modes, but that’s about it. You also can’t see your high scores in any of the modes right away. The only way to re-view them is to enter the level again and die on purpose. It’s a pretty lazy set up since showing scores should not be a hard thing to do at all.

As far as the graphics go, they aren’t bad. They’re not particularly good either, but you certainly won’t be able to make an excuse like you weren’t able to see them or anything like that. The game’s certainly bright enough. The soundtrack is super bland though. Of course, I’d expect nothing less. Now, I don’t want to say that Gunpey is a bad game. That’s still a rare distinction that only some games really deserve. That being said, it doesn’t do enough to be a good game either. It just comes across as being lazy. Not being able to delete the save data is really a bad thing since you never want to have to start with a game already in progress. Fortunately since Story Mode is basically Arcade mode it didn’t matter in that respect, but it’s the principle of the thing. Furthermore, no effort was put into the modes. There’s no sense of style with the records not being able to be seen.

Overall, Gunpey DS could have been a lot better. The gameplay isn’t bad, but since the rest of the game had no real effort behind it you just can’t be entertained for as long as you would have liked. Even though you can buy this game for a dollar or two it just isn’t worth it. I’m sure you could find a similar game for free on the phone or computer. It just plays a lot like a free to play game, but with even less effort and excitement. Still, I suppose you aren’t liable to forget Gunpey for quite a while since the gameplay is rather unique.