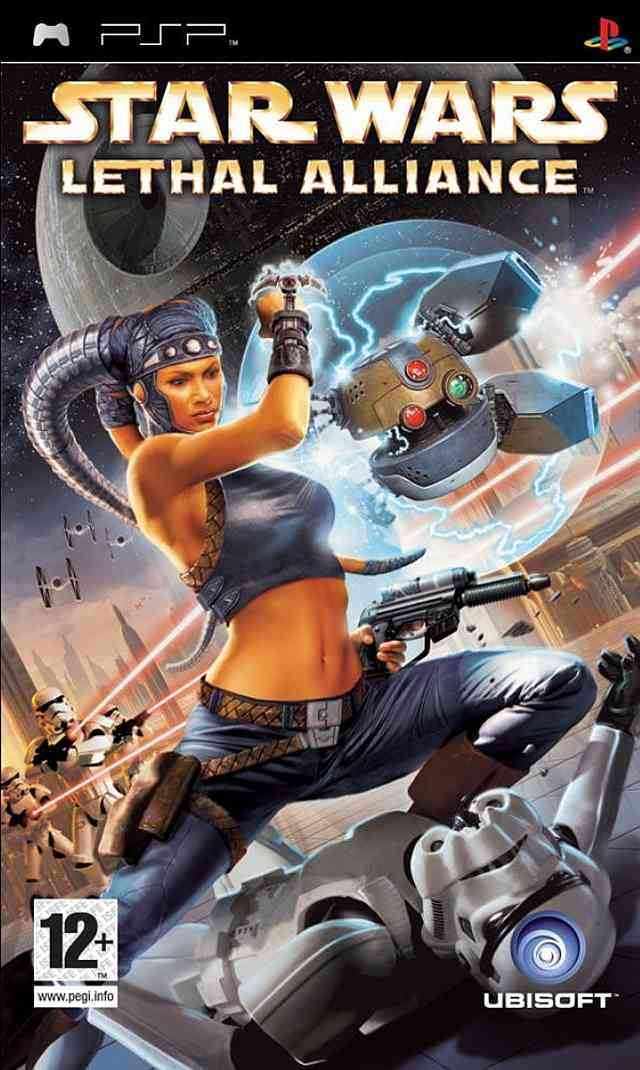 It’s time to take a look at a Star Wars game that is likely forgotten to time by now. Lethal Alliance was one of the few Star War titles that I did not own before now. It was in the way of my marathon so it’s good to finally own it. You can expect more Star War reviews soon but lets not get ahead of ourselves. Lethal Alliance is a very solid game that is held back a bit by sloppy gameplay mechanics. (The game also crashed during the second last level but that was more due to my PSP’s faulty battery than the game) I do like the ideas behind the game and the plot is solid.

The plot follows a girl who is trying to enact revenge on one of the high ranking members aboard the Death Star. To this end she has made an alliance with the rebellion and will aid them as long as their goals are aligned. She will quickly find out that this goal is a lot more difficult than it appears as there are many enemies in the Empire and overcoming them will not be easy. She has no Force abilities, but has a lifetime of combat experience and gun skills to aid her. Throw in her motive of revenge and she is ready for the task.

The gameplay is sort of like Bounty Hunter as the main character uses a gun to fight most opponents. You can also switch to the Lightsaber when you’re in close quarters combat, but for most of the game it is a lot easier to just gun spam. The title gives you a lot of freedom in how you fight though so I’m not saying that it is impossible to fight that way. You can certainly find quite a lot of success with the blade as well. You also learn new moves after every few levels although I never really used them. It’s nice to have options of course, but give me a good one and I’ll likely just start spamming it.

What hurts the gameplay is the platforming part. I feel like it was tacked on after the fact. It’s hard to turn without moving quite a bit which ultimately ends up with you falling off the cliff. At that point you have to go all the way back to the last checkpoint which can get annoying after a while. I also think this aspect of the game doesn’t add anything since the combat moments are the best anyway. Likewise there are some times where you control the drone and they aren’t challenging or inventive so I feel like it was just a waste of space. More content isn’t always a good thing after all.

It’s a shame since the combat is air tight. While playing as a Jedi is always the best I also like playing as these bounty hunters. It’s a pretty fun change of pace and you get to deal with overwhelming odds. Of course, this lead has a lightsaber so it’s a little different. One of the best parts of Bounty Hunter was having to fight a Jedi master while only having guns and normal armaments to fight with. It’s just such a cool concept even if you should have no chance in such a scenario.

The graphics definitely look good. It’s going for a bit of a realistic look so we don’t get a lot of flashy visuals, but there’s a good amount of detail. We also get some cutscenes which is always fun. One of them is unintentionally humorous though as you get ready for a big fight with the main villain and then the heroine wakes up in jail. I suppose you can’t always win all your fights with ease. Still, she managed to rebound after that and did her best to keep on going forward. I definitely think she succeeded as a lead and I liked the twist at the end. Her character is ultimately pretty important in the mythos although it was likely completely retconned by now. While the soundtrack isn’t the most original as it loves to re-use movie themes (Like a lot of the games for this franchise) you never get tired of hearing Vader’s theme. The voice sounded like him too so it’d be pretty neat if they managed to get the same actor to voice him.

The game is fairly short and there are no collectibles/no post game so there isn’t any real replay value to be found. It’s long enough where I wouldn’t feel cheated if I ended up buying it at full price. Nowadays it’s certainly cheaper provided you can find it in stock at least.

There are two points in the game that are a bit annoying though so watch out for them. One is a puzzle element in a level where you have to find a way down from a high up building. I don’t even know how I made it down (I just kept jumping til I landed on something) and it didn’t feel much like a puzzle so much as just a poorly designed level. Then the other iffy part is the final boss where the only way to beat him is to use one of the many abilities you learned through the game. Problem is that I never used this one before. It took forever to finally learn how to activate it and that dragged the game out a bit. Surely the game could have let me know how to use the combos or some kind of guide right? You’re expected to remember them all.

Overall, Lethal Alliance is a pretty fun Star Wars game. It’s a shame that it basically fell under the radar though. I think that’s probably because in general the PSP never got all that big (relatively speaking) so the games are typically not brought up day to day. Still, this is one game that has aged very well and it would be cool to see a big budget remake for the PS4 or something. If you haven’t played this game yet then I highly recommend changing that.