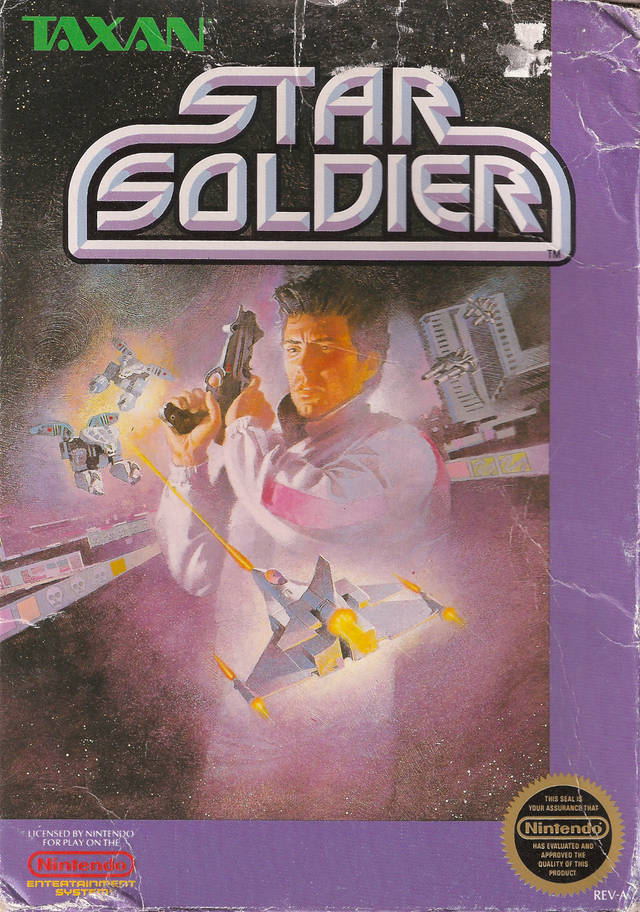 It’s time to look at the next title I was able to play in the NES Online collection. Slowly but surely I’m getting around to all of them. It’s definitely been fun to play these classic games. Star Soldier is similar to Galaga although I’d argue that it’s less refined. Certainly a good sci-fi game to dabble around with (especially when it’s free) even if it probably won’t hold your attention for very long. It gets the job done.

There isn’t really a plot although I’m sure one came with the booklet or something. The general gameplay is that of your average space shooter. You’re in a ship and the screen is always moving down. You have to blast away the enemies in front of you so it’s important to keep moving the ship so they’re never out of your range. You can collect power ups from breaking objects or blasting enemies which increases the amount of blasters you possess. After a time you will also get a shield as otherwise a single hit will destroy you. There are a few checkpoints in the level but the downside is that you lose all of your blasters so when you re-spawn it is very hard to stay alive. Best of luck!

It’s definitely one of those arcade games that you would have a very hard time trying to defeat in one shot. Of course, at the arcade you could probably just keep plugging tokens in until you won and on console you’ve got the access point equivalent. Otherwise I suppose you’d need to really memorize all of the attack patterns. Part of what makes this exceptionally difficult compared to other shooters is the fact that it’s hard to tell what is in the background and what is in the foreground. It’s like the Smash Ultimate Stage Builder in that respect as you can be tricked into jumping towards a cannon that isn’t really there. It’s the same with these objects, some of them aren’t there so you can shoot through them and others will block your blaster. Since just making contact with an enemy is fatal here that makes this a pretty dangerous gamble. It’s hard to avoid these objects as well since they take up a good chunk of the screen.

The soundtrack is pretty decent. Honestly you won’t remember most of the tunes, but the main menu theme is definitely memorable. Then you’ve got the graphics which are pretty passable all things considered. I’m assuming the background part wasn’t intentional so maybe that part should have been better, but perhaps that was the intent. Either way you will be able to see enough to be able to follow the action with relative ease and that’s definitely a good thing.

There isn’t a whole lot of replay value here since you’ll likely be dying around level 2 each time. As a result it won’t be quite as super exciting as it would be otherwise and you’ll not want to play for a very long time. After about an hour or so you’ll probably be ready for whatever the next challenge is. Still, it is a fun game at its core so maybe you’ll be engaged for longer than that. Star Soldier is a fun game.

I can’t speak to the various bosses here since I only ever beat the first one, but the enemy designs do seem promising. There’s one level where a mysterious head shows up to follow you around. It’s invincible, but touching it will make you lose a life. Then there’s a big robot that has a lot of blasters which I promptly took down. I don’t imagine there are a bunch of bosses since I saw on Youtube that someone beat the game in 30 minutes, but with that length I imagine they’re all unique which is good. Recycled bosses is the definition of laziness.

Overall, Star Soldier is a game that I hadn’t heard of until I played it, but I’m definitely glad I gave it a whirl. The NES Online has definitely helped me play a bunch of games that I feel like I probably wouldn’t have gotten to play otherwise so that’s definitely neat. I’d definitely recommend checking it out if you’ve got the NES Online as well. I don’t know which title I’ll be checking out next. Maybe it’ll be another alien shooter game or this time I’ll go for a longer title. Either way the review will be popping up here before long.