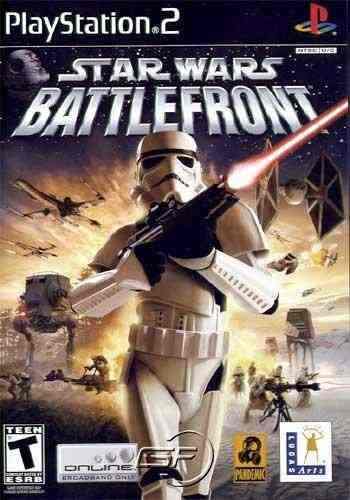 I’ve owned this game for a very long time as I hunted down the PSP game that I needed to play first. Well, Lethal Alliance is now done so that left room for Battlefront to take the center stage. It’s definitely a very fun game and one that has a pretty unique premise. It takes a very different look at what a beat em up game is all about and it works pretty well. It does feel a little limited in scope, but that’s probably because of how old it is. It still does age well, it just isn’t as long as I would have liked. I would recommend it either way though.

The game’s plot covers the Clone Wars as well as the first two movies in the original trilogy. The unique part of this story is that it’s told through the eyes or ordinary rebels and storm troopers. You also switch between fighting for the Rebels and the Imperials as the game goes on. In some levels you are the hero while in others you are the villain. Sometimes this can make it a little difficult to keep track of who you’re shooting which adds to the danger. After all, friendly fire is activated here. Allies can shoot you in the back and vice versa. Particularly in one of the final levels my allies kept on shooting me to death which was pretty intense. They were throwing grenades like there was no tomorrow. The snow level is also tricky in that respect as both sides are all in white (Storm Troopers and Rebels in white coats) so it’s tough to know what to do next.

Each level starts off by showing you how many troops both sides have. Typically it is 200 on each side. It’s cool in that you can actually see the number go down with each KO you land. Expect to die a lot of times as well though since as a normal character you have no plot shield. On average if I took down 100 enemies I would die around 25-40 times. Of course, every time you die your side loses a man as you are effectively switching characters so you do want to try and not die too often. Once one side is down to 0 troops left or you’ve taken over all of the bases in the level for at least 20 seconds then you win. Typically the first win criteria will happen before the second, but there have been a few times where the enemy only had 1 troop left and I won via conquering all of the areas instead.

The areas are key to winning regardless. Your troops seem to do a lot better when you have most of the bases on your side even if it’s evenly matched. That’s why it is usually worth it to quickly leave your troops to conquer the areas instead of trying to hold your ground. It’s the kind of game where pushing forward is encouraged. This did get tricky for one level near the end where the only way to get to the other territory was through a very long bridge right up the middle. It’s one of the few levels where I did die once. It’s a pretty genius design though as it does force the confrontation right off the bat and you have to wrestle with the fact that you can’t just hide and get them from the back. It was a lot of fun and helped teach me to throw more grenades.

I also do think the game developed the stealth abilities pretty well here. You don’t have any fancy stealth kills or anything like that but if the opponent is focused on shooting down your partners you can often start shooting them real quick from behind. By the time they are able to react to your shots the match is as good as over. It’s done in a way that feels pretty realistic and isn’t too overpowered which is very heard to do. It’s the little things like that which really make the game standout. While I played the whole game as a trooper type character you could also pick the sniper, rocket launcher, and a third choice. I’m sure their respective gameplay would also be pretty fun to dabble with.

The graphics are pretty good, although as I mentioned before it can be hard to tell who your ally is and who the enemies are at times. The costumes are really similar and some of the levels are just really dark. The indoor levels are usually well lit so those aren’t a problem but in the dark you end up fumbling through the level. At times I just had to trust in my compass as I shot blindly into the night. Meanwhile the soundtrack is definitely on point. It’s nothing that you haven’t heard before, but it works pretty well all the same.

Where the game is lacking is definitely in replay value. The single player campaign is incredibly short. You can play various side modes like story mode without the story or other bonus levels which helps to an extent. There also is multiplayer mode which I imagine would probably be the most enjoyable option as you lead an army against someone else’s and it’ll all come down to your tactics. Yeah, I ca definitely see that being a lot of fun assuming it works that way. I can’t find too many places talking about the multiplayer here and the only video I saw was more of a co-op. Even so, teaming up with someone is always fun as well.

Overall, Star Wars Battlefront is definitely a very solid game. I can see why this one would have been pretty iconic back in the day. It really was a fresh new direction for the series and I like the way it handled the genre. It’s smaller in scope than it would have been nowadays, but it definitely has that retro charm as a result. The game is very smooth and the gameplay is appealing. At the end of the day that’s really all you need to be a success if you ask me. If you’re on the fence about getting this game because of its age I would recommend you take the plunge and buy it anyway. I’ll be starting Battlefront II soon so I hope to see it continue Star Wars’ steak of quality games.