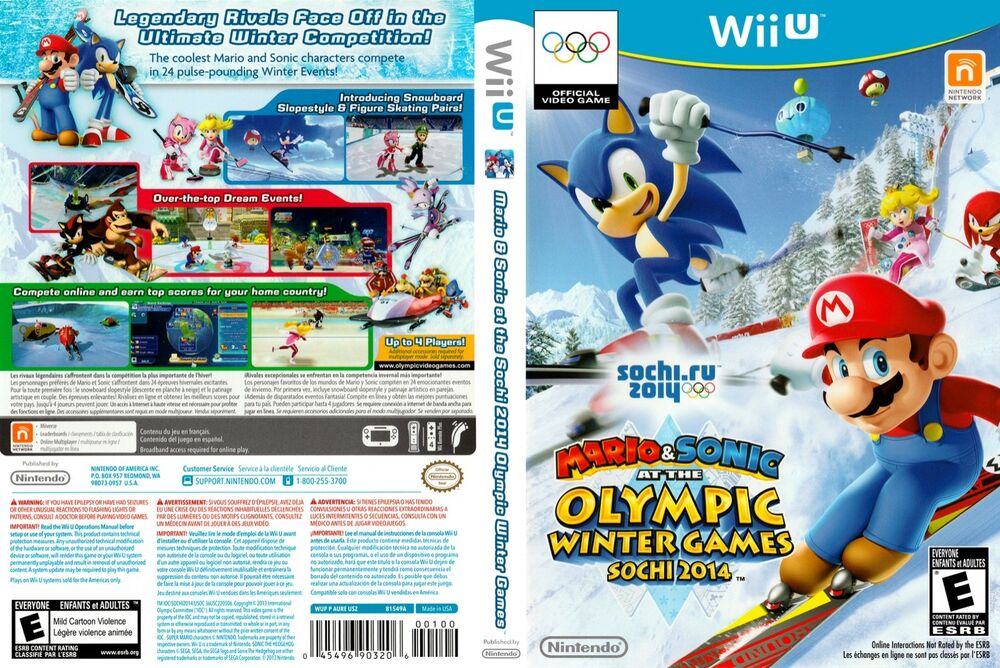 It’s been a little while, but now it’s time to look at the next installment in the Olympic Game series. This one has been a mixed bag for me because some of the titles here have been really solid while others were pretty bland. I have to put Sochi in the weaker half as well. While it does have the best story in the series the gameplay is definitely the weakest. The game made the odd decision of having you switch between the Gamepad and the Wii remote constantly for story mode. That’s just an odd decision if you ask me and it’s one that slows everything down. I’ll go into that more in a second.

The story revolves around Team Sonic and Team Mario getting ready for another round of competition. They are interrupted when a giant castle shows up and mysterious keys lock down all of the doors. The heroes will have to fight past shadow versions of themselves to make it to the top and find out who is doing this. What mastermind could possibly be giving the heroes such a difficult fight? One thing’s for sure, the heroes can’t afford to hold back if they want to claim victory here.

So I definitely do give the game credit for actually adding a story here. That’s where the credit stops. I’ll talk about the positives in a minute, but the controls need to be addressed right away. Not only do you have to switch controls but you have to have the Wii Remote Plus or you won’t even be allowed to play the story. It’s a pretty slick way of making sure everyone bought the add on, but definitely a shady method if you ask me. The player shouldn’t be required to jump through all these hoops just to have some fun playing these Olympic titles.

Would it have been so hard to have just made all of the minigames Gamepad compatible? It’s just really strange that you have to keep switching. Also, the series has never been particularly good with this, but it’s really hard to understand the controls at a glance here. You can see the controls after you’ve paused the game, but the first time around you’ll probably be winging it. The controls are heavily motion based as well so get ready for the game to keep doing things when you don’t want it to. As a result this can make the game a bit more difficult than it is actually supposed to be which is definitely pretty iffy.

On the positive side, the graphics look pretty good as always. It’s always nice to see modern Sonic and Mario on the same screen here. All of the characters look sharp and the same goes for the level designs and animations. The soundtrack is also quite solid as it gives us various remixes for both the Mario and Sonic titles. This adds a little spice to the mini games for sure. It also just makes a lot of sense since the game should not use any generic themes when it has such a vast library of good tunes to choose from. That’s the way I see it anyway.

There’s a good amount of replay value here. The games are all made to be ones that you can replay a lot with friends and family to just have a good time. There are a lot of records to break and content to unlock. It’s not quite as vast as the first Winter Olympic Games which had a whole store filled with things to buy, but it’s definitely not bad either. There are a lot of modes here, but of course what will ultimately decide whether you want to play or not is how much you like the minigames.

On that note, they are very hit or miss. There are some minigames that are a lot of fun like Hockey, sliding down the hill, skateboarding, bobsledding, etc. On the other hand, there is the classic Curling game which seems to make it in every year. This game is as bad as it always was with the outcome basically being luck and the game drags on forever. You never get to walk in and out for this title. The dancing minigames also take quite a while to end. I believe they may be 4-5 minutes long which may not sound crazy, but for a minigame that is really pushing it.

At the end of the day the Olympic series has always seemed like a watered down version of Mario Party. The various games usually aren’t made with quite as much heart and there’s always a dicey one in there somewhere. Most of the games are good and I think they’ll all be reasonably enjoyable once you’re not playing a computer. This is still a good party game, but it’s definitely not the first one I’d recommend getting. I’m hoping that the new one coming out for the Switch does something different. I haven’t played the newest Olympics title yet so maybe by now they’ve fixed everything, but I can say that t this point in time I’m not in a huge rush to get the next one. I certainly will, but I do hope it’s better than this one.

Overall, The Sochi 2014 games aren’t a whole lot different from the other years. I feel like they phoned this game in to an extent. Many of the games share the same controls and aren’t terribly inspired. At the same time, the story is fun though and I think you can get some good enjoyment out of this one. The game is pretty cheap by this point so it isn’t much of an investment. I think it’s also fair to say that the game is not misleading. You should absolutely know what you’re getting yourself into before you play the game. It’s very straightforward about this so I think even without this review you should know whether you enjoy it or not. If you decide to buy the game then just be prepared to switch controllers every other match.