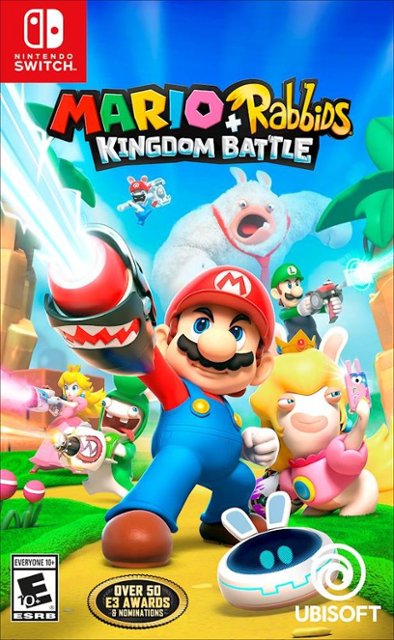 It’s time to look at a Mario game that came out quite a while ago. This was back during the first days of the Switch. I nearly got the game back then, but ultimately Fire Emblem Warriors won out and so this one took the backseat for a long time. After finally playing it I can definitely confirm that this game is a lot of fun. The plot may not be all that solid, but as every other aspect of the game is on point it's definitely easy to get into this one. There aren't a whole lot of strategy games quite like this one.

The main plot is that the Rabbids have infected Mario's world. They are contaminating everything and in particular this can be traced back to one Rabbid who has on a pair of glasses that allows him to manipulate reality. It'll be tough for Mario and pals to deal with this, but they are ready nonetheless. Bowser Jr. wants this rabbid for his own purposes as well though so the heroes will have to contend with him. Fortunately Mario and the gang have arm cannons now so they can blast away at any who would dare oppose them. It's definitely handy to have a long range weapon like this.

So in this game you control 3 characters at a time. You're put on an overhead map much like Fire Emblem and the goal is to strike at the enemies. Well, most levels are about defeating all of the enemies but some are simply about getting to the goal at the end. It's a turn based system and when it's your turn you are able to make a movement, launch an attack, and use a special ability. Once you've finished moving all 3 of your fighters then the opponent gets to have their turn. The villains can sometimes have up to 8 people on a team so they get a lot of turns in a row. Ideally you want to always be hiding behind a rock or something as otherwise they'll finish you off very quickly.

You always want to be thinking one or more turns ahead of the match. You also have to take into account that there are some variable features to look out for like critical hits or moves that have a special element to them. Usually it will work in your favor, but that won't always be the case. I hadn't played an Xcom game quite as advanced as this one before. The one I had played previously was on the GBA and it's definitely not as intricate. I can definitely confirm that I like this system. It's pretty fun and definitely challenging. You won't be fast blasting through this game so easily.

That said, as long as you patiently look at the enemy patterns then you'll be okay. I certainly did die a few times along the way, but after a loss you will always have a better idea of what to expect the second time around. Usually my plan was to keep my 3 members pretty close to each other so we'd overwhelm the opponents when they got close. My go to team was Mario, Peach, and Rabbid Peach. With two healers on your team you're ready to go for the win. Not to mention that the healers can also survive on their own for a while. There are multiple battles where 2 of my teammates died and I was fighting 2v1 or 3v1.

One of the most hype moments came during the final boss battle as rabbid Peach was the only one left against 4 of the big bruisers and the final boss. It was intense and it took me 22 turns because I had to rely on running and gunning it, but it all worked out. It was definitely a pretty intense boss battle. I did manage to beat it in one try, but it's no walk in the park. Going slow was really all I could do in order to ensure that I got the victory.

I also tried other characters along the way like Luigi and Yoshi. Luigi's pretty handy, but he feels like a glass cannon. Often times he would be the first one to be defeated. Then you've got Yoshi who is pretty good and a nice power hitter, but I just really needed two healers on my team. Only having one made things tricky. That's also because Peach tends to hit people with collateral damage a lot. I really love her high attack power, but with her eagle eye skill she would end up hitting me pretty much as often as she would hit the villains. The damage adds up very quickly and she is partially why Mario died after 1-2 turns in the final boss level. Gotta keep an eye on her cannon.

The graphics are definitely pretty sharp here. The colors are vibrant and the cutscenes that we get look really good. I can't say that I'm surprised since Ubisoft always runs a pretty tight ship. The same can be said for Mario games in general so there was no way this one wasn't going to look good. The soundtrack isn't quite as good as most Mario games, but maybe that's the Rabbid influence. It works well enough I suppose.

There's definitely a lot of replay value here as beating the story is just the beginning. There are many challenges to conquer and new areas to explore. There are also a lot of collectibles scattered across the levels so getting those will take a while. The main story is also pretty long. It's hard to say how long it took me to complete this one but it was at least 10 hours and likely quite a bit more. My Switch won't show the play time yet since it's still too new, but it'll show soon and then I'll upload that stat to the rankings. The game has also had quite a bit of DLC so you've got a good amount of content to work through once you play this title.

While the plot is still "Mario" I do appreciate the fact that there is a lot more dialogue than usual here. It gives the characters more personality and I'd like to see more of this in an actual Mario platformer title. The extra story details and such would definitely help and without the Rabbids to distract you it could really go far. Fans of Bowser may be a little sad at his portrayal here, but while he doesn't look tough it was nice to see him as the considerate father figure to Bowser Jr. In general Bowser always seems like a nice guy aside from the whole kidnapping Peach thing. Not really something you can overlook though.

Overall, Mario + Rabbids is definitely a successful experiment. Of course, that's mainly attributed to the gameplay. I'd definitely like to see more Mario games adopt this style. I can see how it would be a little tough for kids, but they do have an assist built into all of the levels where you can start the match with extra health for all of the characters. I think that should help the kids get through it a little easier. I definitely recommend not using that feature though because it will take away from your ability to adapt to the level. If you've got a crutch like extra health then you simply won't see the point in honing your skills. If you haven't played this game yet then you should change that. It'll give you a run for your money.