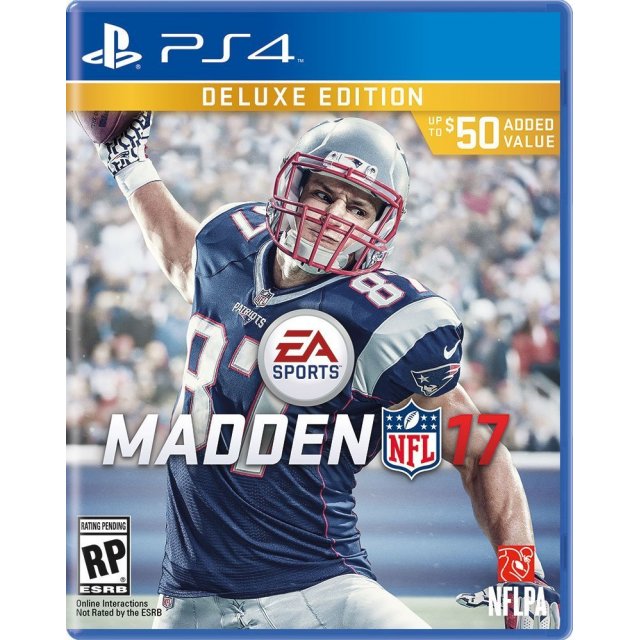 All right guys, it’s finally time to take a look at one of the newer Madden titles. Madden is easily still my favorite sports title out of all the big EA games and 17 continues to impress. While this installment isn’t quite as impressive as some of the older ones, it still had all of the positive fundamentals that we have come to expect from the series. It’s certainly a steal considering it was only 3-4 bucks.

The gameplay is the same Football mechanics as the older ones at least in a grand scope kind of view. The goal is to score more points than the other team by getting a player with the football into the opponent’s end zone. Alternatively you can just kick the ball in. You’re really going to need to be able to survey different parts of the screen at once especially when throwing passes. It’s a very intricate game and you do need great reactions to pull this off. Part of why the game is so satisfying is because it needs all of those skills. You can’t pick up the game and suddenly become good, you’re going to need to work on it. There’s definitely a lot to learn too since you’ve also got other sides of the ball like defense, kicking, and running.

While not much has changed since the last Madden they did retool the kicking gameplay once again. Now you’ve got a meter that goes up and down which you have to stop twice. I definitely preferred the old system where you would just flick a lever up and down. I suppose this one is a lot trickier though, but I don’t think you need to over complicate field goals. It also makes the meter pretty crazy when you increase the difficulty. That’s not new, but I still disagree with it since I want a challenge on the field when upping the stakes, not a challenge to fight myself!

Accelerating is a little less obvious here so the game is a little more like a simulation than arcade style. I miss zooming around the field, but I do get the logic and it works well enough. The tackling is still on point and you can see how the game is really well polished in all areas. The gameplay is just a lot of fun provided that you like the sport of Football. It accurately portrays how the game goes down. When you’re playing you feel like you’re in total control so the game succeeds here.

It goes without saying that the graphics are pretty incredible as always. Everything is just so lifelike and while EA may not have the best reputation they do always deliver on this front. As for the soundtrack, it’s less obvious than usual. You’re really not going to be paying it much attention anyway since you’ll be in the game by that point. Now the presentation is where its at and the game is stunning there. It really feels like a real game with how the announcers introduce the teams and we get a nice pre game set up. Likewise you get a good set up for the playoffs and super bowl.

There are a lot of modes beyond the quick games of course. You can practice or jump into the online modes. There are a lot of ranks to go through so if you play online then you’ll probably be around for quite a while. Learning all of the playbooks will take a while and naturally obtaining the Platinum is quite difficult. These games may come out every year, but one title is enough to hold you for several years to be honest since there is just so much to do. There’s also the fact that every game is different so like a fighting game there is basically unlimited replay value here.

Due to the nature of the game there isn’t a whole lot to say but I’ll end off with my tips on how to take the computers down a few pegs. I was able to take them down until All Madden difficulty after all although at that point they cheesed me out. One thing I don’t like about All Madden is that your players start to choke. They begin dropping passes and fumbling all over the place which doesn’t feel like a real difficulty spike. It’s more like your players start breaking down as if they’re 1st year rookies going into their first playoff game. So ignoring that, my strategy for winning was a bland but effective ground game. I’d run it on 1st and 2nd down and then pick up the final 3 yards over the place. Then I’d mix it up with a first yard pass sometimes. I would win in very low scoring games like 17-10 or something like that. The computer has a hard time fully shutting down the run so you’re almost guaranteed to get 2-3 yards up the middle each time.

On the other hand, if you go around then you’re more likely to lose yardage but you have a decent shot of getting a big gain. I prefer consistency so I go up the middle and you’ve also got the shot of making a big gain so the way I see it there isn’t much of a downside to this. Just keep plugging away and eventually you’ll get some kind of win. Defense is also important, but I don’t really have any tips for that. What’ll happen will happen with that one.

Overall, Madden 17 is definitely a game that you’re going to want to jump into. It’s only 2-3 dollars so there is really no downside to making the purchase. By the same token you can also just skip to 18 which is basically the same price and have close to the same experience. It’s really up to you to see what you want to do, but there’s no bad option. While I do think they should speed up the gameplay a bit like in the old days it is still very balanced. I think the problem of the low acceleration is that the running back feels like just an ordinary player as opposed to the speedster. It also gets rid of the quarterback advantage which is too bad because I loved scrambling for every play and getting a bunch of yards. I guess it was pretty broken to be honest though. The quarterback was unbeatable in some of the older games.