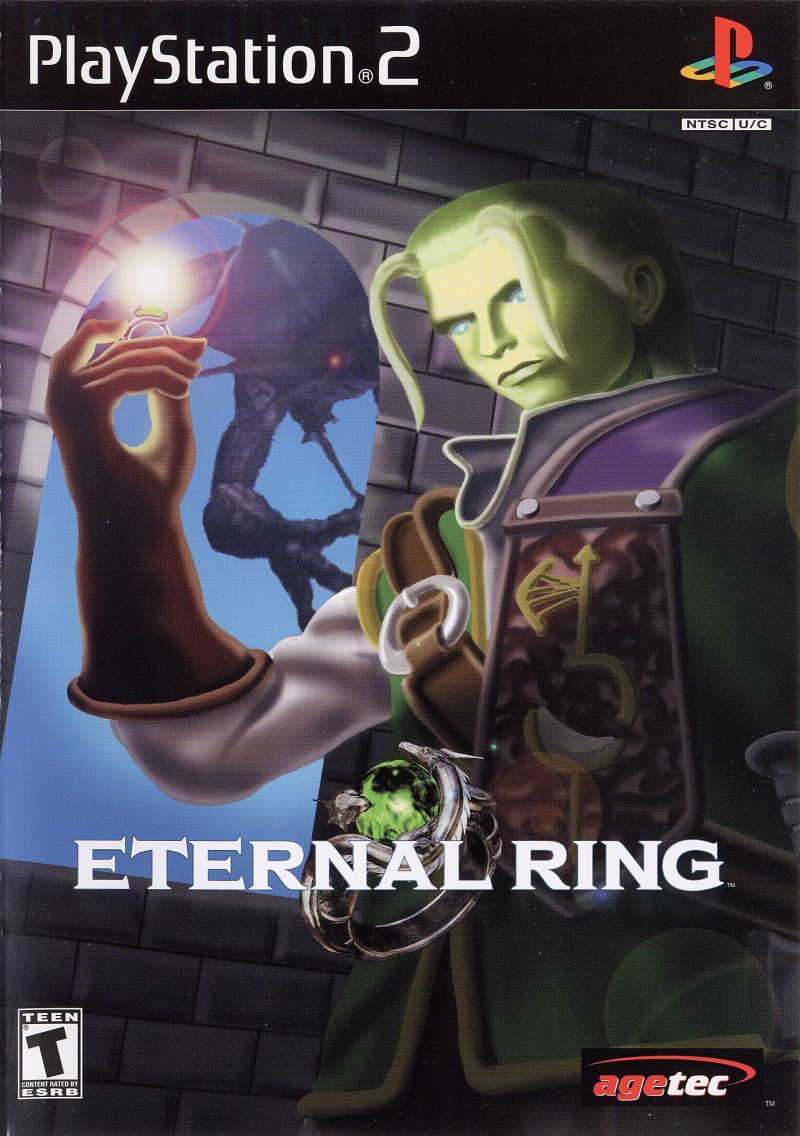 It’s time to take a look at an RPG that I’ve had on the backburner for an extremely long amount of time. It’s been several years since I started this game, maybe even a full 10. Regardless, it was time to finally go through it and it’s a unique experience. I hadn’t played a first person RPG title before. I definitely prefer third person, but I’m always up for trying something new and this was quite the experience. The game has several weak areas though which prevent it from being a truly solid title.

The game starts by showing us a cutscene of someone fighting a dragon a long time ago. We then cut to the present where the king’s advisor sends his son off to a mysterious island to find out what’s going on. There had been something called an Eternal Ring planted in that island a long time ago. The king sent many soldiers to the island, but they never returned. The Hero arrives and things are not looking good for the army. Most of the members have succumbed to monsters and demons lurking on the island. The captain of the guards was personally consumed by the Eternal Ring and now exists as an undead who wants ultimate power. The lead will have to steel himself as he heads through this island to locate the Eternal Ring and complete his mission.

The plot is as vague as can be in the beginning so you get to piece together what is happening along with the others characters as the lead goes on. I tend to like this intrigue style and the more you withhold from me the better. Still, there isn’t a whole lot that happens here til the end. Then we learn about the infinite prison, the child of one of the gods being trapped, and other such things. The lead takes all of this in stride as he doesn’t bat an eye whether he is fighting ordinary lizards or taking down demonic tyrants. It’s all the same to him, he just wants to grab/destroy the ring and head home. It’s really all he is focused on and doesn’t even talk to anyone. Truly a tough man, but he gets the job done.

Eternal Ring is rather tragic with the plot as just about everyone dies though. I especially feel bad for the soldiers who have been trying to uphold the rebellion for years only to be completely left to fend for themselves. They did good to last this long, but when just one of the big villains can solo the whole army you know that things won’t go well. The ring is also too powerful for their mortal minds to just being near is an issue for them as well. There’s really no winning for the army grunts this time. The overall plot concept is still really cool though. There’s a lot you can do with it. It’s pretty simple at the core, a mysterious island exists with monsters protecting a jewel of ultimate power. It’s just all about the execution and the story is the strong part of the game.

As for the gameplay, as I mentioned it is a first person title where you swing a sword and fire magical spells. Think Call of Duty, but without the guns. You go from area to area as you collect keys and slay monsters as you get closer and closer to the heart of the island. Key spells include the recovery spell and the anti-poison one. They will save you much needed gems on potions and antidotes so you can buy the important things like MP crystals instead. When in a fight it is very important to strafe as much as possible to dodge hits. Almost all boss fights can easily be won by strafing while slicing the entire time. The matches will take an eternity if you’re under leveled, but they simply can’t hit you.

I ended up beating the game at level 27 which is way under leveled compared to where I should have been. That being said, I had obtained enough gems to get the wind summon which can easily destroy even the final boss in 4-5 hits. The summons in this game are ridiculously broken to the point where once you get one you have effectively conquered the game. It was smart of the title to keep them locked away for so long although if you knew where to look ahead of time you could have gotten the summons quite a bit earlier than I did. I didn’t grab them until right before the final few areas. They’re risky against minions since there isn’t a lot of space to use them so stick to fighting the bosses with them. Why does space matter? Well, summons actually deal friendly fire so they’ll destroy you in one hit if you’re close by when they strike.

Eternal Ring makes your journey a little more tedious than necessary though. For starters, there is only one shop in the entire game. If you want to go buy some supplies to help you out in the final sections then you’re going to have to run all the way back to the army base in the forest. This can take you an insane amount of time since most levels are constructed to be mazes. If you don’t have a map nearby then all I can say is “Good Luck!” because you’re going to need it. Then you’ve got the fact that save points and level ups don’t restore your health or MP so if you don’t have your health ring ready then you’ll be burning a lot of items very quickly.

The game also doesn’t help with finding out how to create the rings you want. You have to put the attribute in the left and the type on the right, but with 6 slots and over 100 possibilities you could potentially go throughout the whole game and not get the cure ring. I would have been sunk without it and that’s just unnecessarily difficulty. Nothing in the game is properly explained so you’re just left to your own devices. The story doesn’t need to be explained, but the same cannot be said for the gameplay. I absolutely need to know how to do the things so I can plunge through and claim victory!

It can be hard to see where you’re going because of how dark the game is as well. I have to attribute some of the blame to my TV since it’s always had a very tough time with PS2 games in general. Still, I could have done with more light levels as opposed to almost all of the stages being inside a very dark cave. It’s not even as enjoyable as being outside because at least in the latter scenario you can always see what is happening no matter what. Caves all look the same after a while.

The soundtrack isn’t bad. There’s a decent blend of tunes here and the themes are more extensive than I would have thought. As I write this review I’m listening to the soundtrack and it all sounds so nostalgic since I just beat the game. It’s not amazing, but it’s better than I would have expected. It helps make up for the game’s sub-par graphics. As for replay value, there really isn’t much at all after beating the game. You could try to grab all of the magic rings and such, but there isn’t really much to do with that newfound power once you’ve beaten the game. At that point it is just time to take a step back and head for the next title.

Overall, Eternal Ring was definitely put on the bench for a reason. It’s a game that the me of 10 years ago would have probably been really confused by. As it stands I still think that the game makes itself overly complicated at times and needlessly grindy in other sections. Leveling up isn’t very convenient and the lack of healing and shops in the game make you have to backtrack and run around a lot. Getting lost is also rough because if you lose then you’ll be sent back a long ways away to the last save point. You just never want to go out that way. If you really like the idea of a close quarters monster brawler then this could be the game for you. Just know that you are going to have a lot of exploring to do so the gameplay may not be as fun by the end of your struggle. First person style may not be my thing, but I’d be down with a sequel to this title if they gave it some more polish.