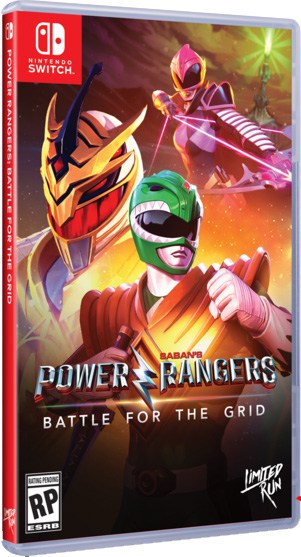 It’s time to look at the big Power Rangers crossover game for the PS4. This one seems to have a similar plot to the Shattered Grid comics so I wonder if it’s an adaption of sorts. Either way as someone who doesn’t know a whole lot about Power Rangers except the fact that it’s an awesome franchise, it was a blast getting to play this title. The gameplay is top notch and the story is exciting. The series manages to capture a lot of energy in every scene and really ends up being a total success.

The game starts with Drakken showing up and murdering Rita. He then decides to wipe out all of the Power Rangers from the various timelines so he can steal their Morphers and take the power for himself. With all of these abilities he will be the strongest ranger of all time and that will put him in a good position to rule the universe. The original Power Rangers are going to have to put a stop to this but they can’t do it on their own. As such they call in the other Rangers and now a battle for the multiverse has begun.

It’s been a long time since I got to play a classic Arcade story like this and it feels good. The last time was probably Street Fighter V. Sometimes it’s nice to be able to just jump into the next fight rather than running around a hub world. This game takes you from fight to cutscene back to more fights. It does make for a rather short story, but a satisfying one nonetheless. The crucial parts you need to have with a story like this is a solid group of characters and exciting music to amp you up for each fight. Power Rangers delivers here.

The soundtrack is top notch. It’s a rather small array of themes, but each one will boost your adrenaline and get you ready for action. Then you’ve got the graphics which are nice and very flashy. Everything looks good both in the actual gameplay and for the illustration cutscenes. I feel like there was a pretty good budget behind this game and the developers effort paid off.

As for the actual gameplay, it’s basically a 3 on 3 Capcom vs style. You can utilize combos with all 3 characters or you can focus with one at a time. Sometimes it is handy to just do the 1 at a time approach because if you summon another character to help at the wrong time your opponent may end up blasting both of you at once. That’ll never happen if you stick to just one character, but typically the positives outweigh the negatives in using the full team. I also recommend going through the tutorial mode because button mashing may not cut it here.

The story mode is actually a little more difficult than the average fighting game as the computers show some actual intelligence. They won’t just walk into all of your hits, you’ll have to try to actually outmaneuver them. I actually did lose once against the final boss and that’s considering that I studied the combos in the tutorial mode and practiced a bunch of them. You’ll also want to do this so you can summon the Megazord. Fighting games in general are more fun when you know what you’re doing so you should just do it. Trust me, you won’t regret it! The tutorial only takes a few minutes so it’s worth doing.

Each character has a unique set of moves so you’ll want to play them all to see who your favorite character is. I got to play as most of the characters through the story and by far my favorite character was Jason. He can be a bit cheesy since he has some of the strongest moves as well as a lot of projectiles. Using him I was able to quickly get to Gold III rank online which felt pretty impressive. It’s just hard to beat those combos and then other characters have some pseudo infinite combos. If your opponent doesn’t know how to stop you from grabbing you can keep on doing that over and over until they lose. Once they’re in a corner there aren’t many options to escape the grab. It’s the kind of game where you can get very good very quickly, but watch out as there is always someone even better out there.

As I mentioned the story is short, but there is still a good amount of replay value here. This is a fighting game after all so you can go online and try out a bunch of matches. There are seasons that shuffle every few weeks/months so it never really has to end. The game is quite new so I don’t imagine that the players would leave too soon. That means you’ll have a lot of time to really practice your skills. You can also work on unlocking all of the titles by playing a lot of Arcade modes and trying each character out a bunch. I guess the bottom line here is that there is enough content to satisfy you as long as you play online. If you only do offline then you’d probably want to wait until the game is 20-30.

Overall, Battle For The Grid is a really fun game. It’s a nostalgic title in some ways as it’ll remind you of the old school fighting games. This one isn’t trying to re-invent the genre, it’s just got very strong fundamentals. When you pick the game up you instantly know what all of the modes are and where you want to go next. The main menu is very straight forward and the interface is super clean. It’s just a very well made game and one that serves as a great introduction to the Power Rangers series. I know it definitely helped remind me what a great franchise it can be. If you don’t have this game yet then you need to check it out. It’s one of the sleeper hits of 2019.