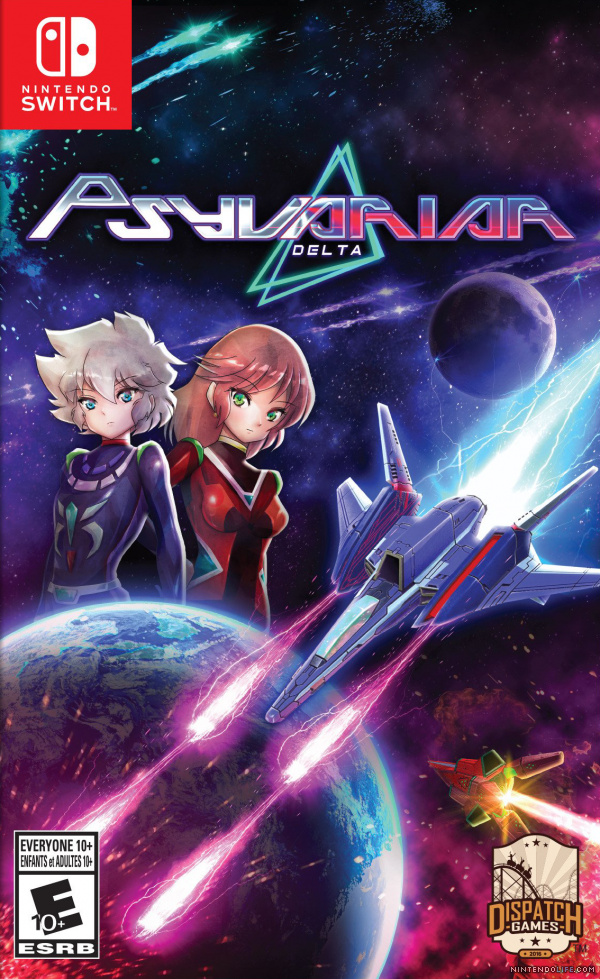 Psyvariar Delta is a game I had never heard of until I happened to come across it at Gamestop. The cover art looked interesting enough and I’m always up for a sci-fi game so I quickly hit the trigger on this. The game ended up being a bit lackluster though as it doesn’t really have a story and is incredibly short. It would have been quite amazing as a SNES title, but on the Switch it feels quite a bit dated. The game is an HD remake of sorts so it is an old game, but I think they should have added a few illustrations to work as cutscenes or something like that. Even something minor would have really gone a long way to making this title more impressive.

When you start the game you don’t really have a lot of options. You can play Score Attack or jump into the main arcade mode. In the Arcade Mode you can choose between the two characters, 3 different music themes, and 3 different routes. All 3 routes are basically the same but I believe one is based on the original version, one’s from a remake, and then one is a remix. I couldn’t really tell the differences between the 3 of them so to me it almost felt pointless. Still, at the end of the day a little customization is better than none right? That’s at least what I tried to tell myself to justify the purchase a little more. Choosing between the two characters is also something that barely counts because while the ship looks a little different, the game doesn’t even go as far as to change the character portrait so it looks like you are playing as the same character. That’s not exactly what I had in mind.

As for the gameplay, this is a bullet hell game. What means is you’ll be faced with constant streams of projectiles. The levels are auto moving ones like Galaga where you can move left to right and up/down but you can’t go faster than the actual level. You have a main blaster which you can condense into a more powerful blast or keep as a wide attack. I prefer the condense version, but they both have their uses. You also have a few bombs which you can fire and then detonate. Make sure you press the bomb button a second time to actually blow it up or the bomb just gets wasted. You get unlimited continues in the game which makes the route pretty easy so you don’t really have to worry about playing cautiously. Just get in there and start blasting.

Some of the enemies/bosses have pretty original designs which is always nice to see. The graphics here don’t disappoint as the whole package looks pretty nice. Perhaps not out of this world levels of awesome, but you won’t really be complaining about the presentation. The controls are also smooth so I don’t have any real qualms with the gameplay. I think you should be able to move a little bit faster since it feels impossible to dodge the attacks at times, but I think that just means you had to make a different decision earlier. It would be a nice change, but it’s not exactly a deal breaker.

It’s the length of the game that’s an issue here. You can beat the arcade route in around 15 minutes. I beat the game 5-6 times in one day but there are no real rewards for doing so. It’s the same thing every time and I guess you can just try to improve your score. I played all of the routes just to see if things would change and it never really happened. I know you can’t win them all, but I was still hoping for an extra victory here and there. Maybe a cool cutscene or a big new boss who shows up to mess everyone up. These are the little details that I personally think would have gone a very long way towards making this game more of a real contender in the shooter genre.

As it stands, I can see why the game is only about 15 bucks nowadays. Even that feels like a little too much. I’m effectively docking a star for the length and lack of features here. If the game at least had a basic story to go along with it or something else then maybe we could have something here. 15 minutes just doesn’t really cut it. I don’t regret getting the game since the store was having a buy 2 get 1 free sale anyway and it wasn’t a bad game, but I was certainly expecting more than what I got.

Overall, Psyvariar has an interesting title and a dynamic cover. Whoever did the artwork should definitely get some praise because that person helped me buy this game. If you know what you’re getting yourself into beforehand then you should be okay here, but you really do want to be aware that the game won’t last you more than a few minutes. You should not be paying anywhere near top dollar for this one because it’ll be gone in an instant. At least it allowed me to bump a game off my backlog almost instantly so there’s always a silver lining there. Browsing through the Switch collection at Gamestop there are certainly a lot of interesting games for the system. One day I’ll nab em all.