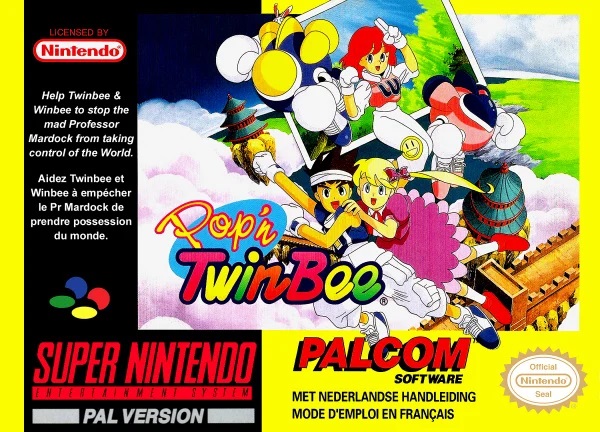 It’s time to look at a classic SNES game. I say it’s classic but odds are that you may not have heard of this one. I certainly hadn’t, but its aged pretty well. It’s an arcade shooter that actually has a bit of a plot between levels. Don’t expect a huge narrative or anything like that, but just getting images connecting the game is more than I would have assumed prior to playing the game. Some parts of it are a bit more complex than expected, but it ends up being a very enjoyable experience.

The game starts you off in a 3D adventure as you fly through the skies and blast away at the enemies. Aside from your normal energy blasts you can also summon a bunch of bees which cover the sky and destroy all enemies. It’s an incredibly powerful move so use it sparingly because you don’t get to carry a lot of ammo for it. I actually couldn’t tell where you even saw the amount of ammo left so I’d run out and be unsure of when I’d get it back. At the end of each level is a powerful boss to defeat. They’re usually all giant robots like a robotic spider or something of that nature. The bosses are less trouble than the actual levels but don’t underestimate them or you’ll end up paying the price. The rewind feature comes in great handy here.

The graphics are pretty nice. You always feel like you know where you are going and the various enemies have nice designs. The little animations after the levels are fun enough as well. This part has aged quite well. The soundtrack isn’t particularly memorable but it works well enough. It’s got that upbeat arcade kind of feel to it which definitely works for me. You’re also so busy dodging all of the attacks that you’ll quickly find yourself entranced in the gameplay.

TwinBee sees a big difficulty spike around level 4-5. Suddenly you have enemies on the ground blasting you from all sides and a ton of aerial enemies as well so it’s tough to blast them all. For starters you can only hit the ground enemies with your bees and by now you’re probably all out of them. For the aerial enemies they are quite durable so by the time you defeat them they will have probably blasted you to smithereens by now. It’s just hard to deal with opponents who are quite so numerous and even with rewind it’ll be tough to get past them. I made it over halfway through the game but eventually had to raise the white flag. If you want a solid adventure with a good degree of difficulty then this is definitely the game for you.

TwinBee is definitely one of my favorite SNES games thus far. While it’s not quite a match for the main Nintendo games like Super Mario Kart, it can handle most of the other games available at the moment. It’s an arcade game that wouldn’t be out of place on the Eshop right now. That’s the level of quality I like to see. This is definitely a game that was not slapped together as the developers put a good amount of effort into it. The effort certainly paid off quite nicely.

Overall, Pop’n TwinBee is a fun SNES game and one I’d recommend checking out. It’s up for free on the Nintendo Switch Online service so it’s worth a look. As with the rest of the games there I don’t imagine you will be playing them for long, but it’s a nice way to spend an hour or so. The gameplay is quite sound and while it may be difficult to figure out the layout you’ll get the hang of it. I still don’t exactly know how the items work though. That part’s a little confusing as they keep changing colors when you blast them, but it’s an interesting element. It’s a bit of a gimmick but it’s not annoying which is the key part.