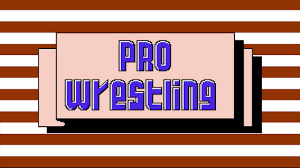 It’s time for another old NES classic. This time we’re entering the Wrestling sport and I haven’t played one of those before so this was certainly going to be interesting. It’s a fun enough game where you get to really barrel into your opponent and pull off some moves. As with most NES games the only real option is to just go in there and play a few rounds so it all depends on how much fun the gameplay is. It isn’t quite as innovative as the Dodge Ball game but it makes for a reasonable playthrough. It’s fun to run and around and see what the opponent does.

When the match starts the idea is to get the opponent to the ground and keep him there until the ref says you’ve won. You can also throw your opponent out of the ring and try to prevent him from getting back inside for a few seconds. The latter seems really difficult if you ask me but I’m sure it’s possible. I let the opponent do that to me a few times for fun. You can also jump from one of the corners of the stage and fall into the ring for maximum damage and salt. It seems like a fun move to do on an unsuspecting opponent but the computer will never fall for it. The best thing you can do is knock them down first and then do the pounce. Even so, it’s incredibly hard to keep them down.

Perhaps there is a trick to it that I’m missing but my opponent just wouldn’t stay down. He did everything in his power to rise up over and over and over again. There also aren’t a whole lot of different attacks so it can get a bit repetitive very quickly. I found switching characters to help extend the game a bit. You can play as a cool reptile fighter who actually starts biting into his opponents which is pretty cool. The rest of the characters don’t really have fancy attacks like that but even just one of them being like that was pretty cool to me.

To switch things up you can also run into the net and bounce back to try and hit the opponent with an elbow or a flying knee. You can also throw them into the net and as they bounce back land a solid hit. These little gameplay elements help to switch things up and make the gameplay a little flashier so I certainly enjoyed that. The graphics hold up pretty well I’d say. It’s still NES of course, but the colors are bright and you always know what is going on. Those are the two things I always look for in a game and as long as they are there I feel pretty satisfied with myself. I didn’t really notice much of a soundtrack if the game even had music. I’m assuming it did, but I really didn’t notice while going through the matches.

Overall, Pro Wrestling is a pretty decent game. There’s not a lot to do so you will find yourself back to square one pretty quickly. That being said, if you want to duke it out in the ring it’s still a good way to buy yourself some time. Then by the end of the adventure you can say that you’ve now played a Wrestling game. This one is probably overshadowed by the boxing rival Punch-Out which makes sense but does have a bit to offer in its own right. Give it a shot and see if the game holds up well enough for you.