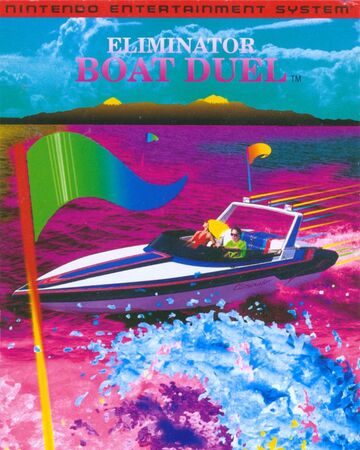 It’s time to look at another classic NES game. This is another title that I was not familiar with before. I’ve never heard of any game quite like Boat Duel but the premise looked interesting. I am planning to try all of the NES games after all so it was only a matter of time before I got to this one. It’s definitely pretty reasonable although some parts of the game have aged better than others. I’ll give it props for the mini cutscenes and trash talking during the game though.

The basic plot of the game seems to be that you are an up and coming boat driver and so now you’ve decided to take down all of the previous bosses. This will be tricky since none of these guys plan to go down without a fight. That’s fine by you though. So you go through the levels and keep on beating various opponents. At least to the point I had gone up to they didn’t reuse any character models so that was pretty good. There was a reasonable amount of effort put into the game and I always applaud effort like that. The gameplay switches between 2D and 3D. I personally enjoyed the opening phase of the 3D levels more than the second.

How it works is you quickly accelerate when the judge gets you the signal. The trick is to actually start right before she tells you too, but the timing for this is very precise since if you go too soon then you’ll end up incurring a yellow flag which will cost you 1000 bucks. Once you get this head start you go to phase 1 of the gameplay. Essentially what happens here is that you have to outdrive the other boat to the goal so try not to bump into things. Then you head into phase 2 which is more of an overhead view than 3D and the same rules apply. You can boost to gain a little speed and even jump. Then there’s also the interesting mechanic where bumping into bombs and other obstacles is actually good as it speeds you up. It’ll cost a bit of damage but you can repair it later. You get to face the next opponent after you beat the current one 2-3 times.

After each race you are taken to an upgrade screen where depending on how much money you have you can upgrade various things. I recommend maxing out the damage each race since it’s super cheap to do this and then you can allow yourself to bump into everything. By the point I stopped I had nearly every upgrade maxed out so I feel like I was pretty close to winning it all. The opponent racers are incredibly fast so if you make one mistake then it could be game over. My main advice here is to use the rewind feature but otherwise I’d say just try and memorize the stage layouts. The stages actually are re-used quite early on so after a while you’ll probably start to remember where the next turns are and such.

The gameplay is pretty interesting but not quite as exciting as your average racing game. There’s just only so much you can do while you’re on a boat so it’s not quite as thrilling. as being in a car. The opponent car also feels a little too powerful at times even when you can see that they haven’t put any real upgrades into the speed while yours is maxed out. I suppose it’s to be expected to an extent but you’ll probably shake your head a bit at that. It just feels like you should be steam rolling the guy. As mentioned though, the trash talking between levels is pretty fun. The graphics are also pretty sound. The sprites have aged pretty well so you always know what is going on. The levels may be a bit repetitive but they are well designed.

Overall, Boat Dueling seems like it has a lot of potential. I’m sure you could make a pretty interesting remake of this at some point. While it’s a cool concept I guess the reason most probably wouldn’t make a game like this is because for that you could just make one about cars and it would probably do a lot better. You just can’t top cars after all. Still, I think you’ll have a reasonable time here and it’s worth a quick check. What’ve you got to lose other than time right?