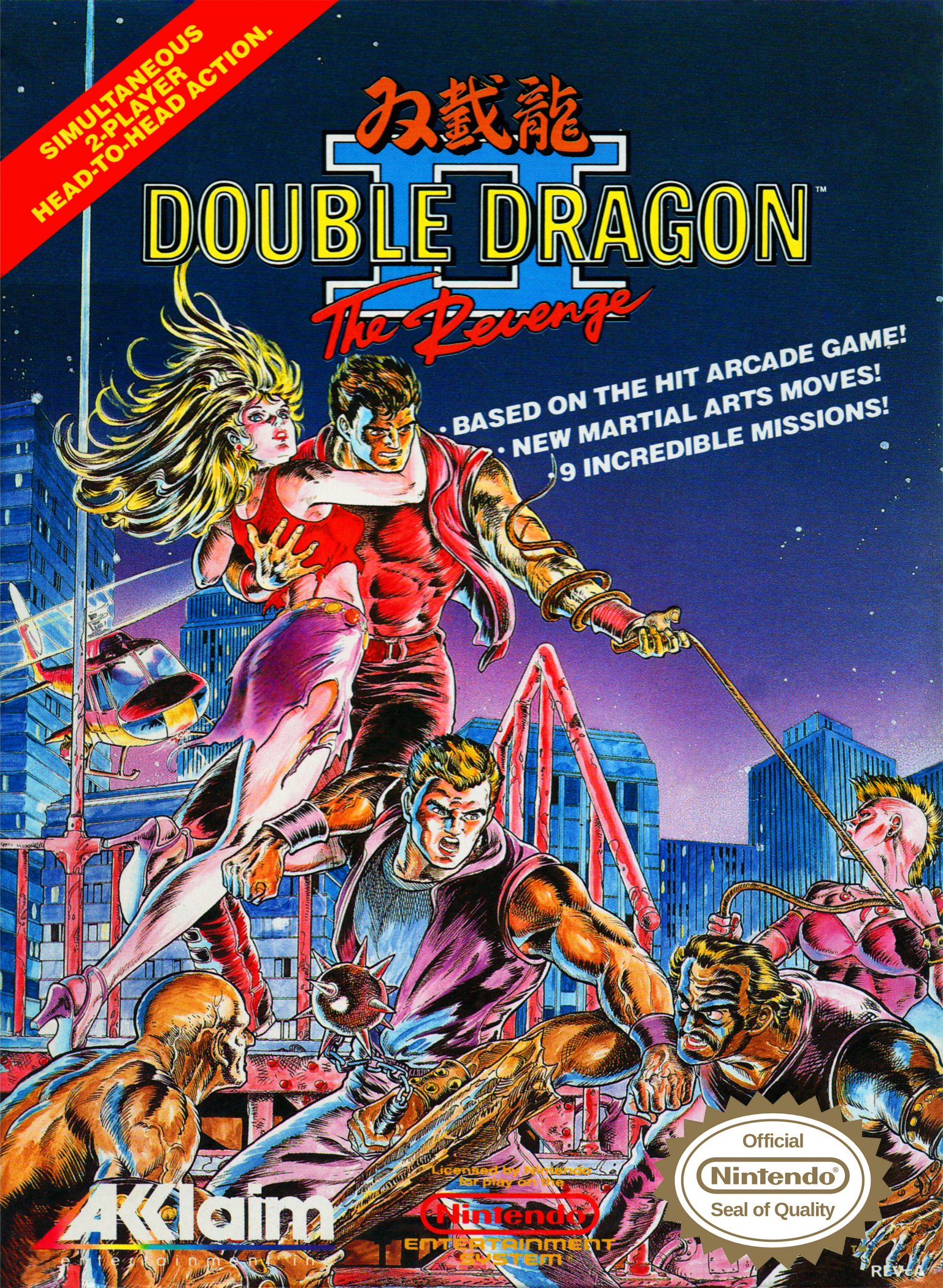 It’s tome to look at the sequel to the original Double Dragon. Double Dragon II is a pretty solid followup that handles everything just as good as the first game except for a slightly weaker story experience. At the same time it doesn’t give us any crazy loop levels this time. (Still can’t believe the first one did this) So I’d say that this does beat the original game. It’s really got all the hype you could want from a classic NES game and is a fun way to spend around 30-40 minutes.

The plot of the game is definitely a lot darker than the first one. Instead of being kidnapped, the main heroine is murdered by an opposing gang this time around. The heroes decide to avenge her and head off to destroy the gangs. This will be difficult though as the villains heavily outnumber them by hundreds of fighters. That’s not enough to set these guys back but they’ve also got to find the main hideout which will be tricky. Fortunately they have a lot of henchmen to beat up and one of them ought to know where the villains are. From there it is just a matter of finding the right one.

So I was pretty surprised at the story. I mean, it just seemed really intense for back in the day. That being said, towards the end of the game they start hinting that the heroine is actually alive. We seemingly hear her voice after all. Unfortunately the game cuts out before you can get there. I guess there’s some kind of trick to actually facing the final boss or maybe it’s a difficulty level thing. How the game ended on my playthrough is you fight a shadow clone of yourself. It’s always fun to do that but I never liked the idea of the game hiding the final level behind another difficulty. Cmon, you should let me actually get the ending. Having a bonus for people playing higher difficulties makes sense, but make it in the form of a post game or something instead of cutting out my ending. I thought that was uncalled for.

As for the gameplay, it’s your classic 2D beat em up. You have to keep fighting through scores of enemies in order to beat the level. A lot of them are big bruisers this time so definitely time your punches right or you’ll eat a counter worth a ton of damage. There isn’t much to the controls so you should know how to play the whole thing straightaway without any real problem. That being said, the ninjas will still be a pain to deal with. They move incredibly fast and are constantly jumping. They also like to throw things at you once in a while and I don’t know what the proper strategy is to deal with them. They definitely caused me a ton of restarts and rewinds so these guys are definitely serious business. They were actually even tougher than the bosses to be honest.

The graphics are pretty fun. There is a noticeable improvement which is always good to see. The character designs and stage layouts are all pretty fun. Then when it comes to the soundtrack it’s pretty pleasant. I can’t really say that it’s memorable though but I’d say that the important thing is that it’s not distracting in a bad way. A good soundtrack should enhance the experience and I’d say that it does even if only slightly. The game’s fairly short also so it’s not like you got to experience it for very long. You’ll be through the game in no time.

There isn’t really much replay value though. I suppose if you picked the wrong settings or something then you will need to play the ending again. I’d look up why you don’t get the real ending before you play the game though just to save yourself some time. If it is that you have to beat the game twice no matter what they that’s really forced to try and make the length better. I never support that kind of practice, it just seems a bit underhanded to me. You shouldn’t force people to play your game a lot through gimmicks like that.

Overall, Double Dragon II really shows you what a sequel is supposed to be all about. It grabs the positives from the first game and erases the big negative I had with it. All of the levels here are pretty linear and you don’t have to worry about the game trying to trick you. It’s all about just using your skills here and fighting with great speed and precision. So long as you do that then you’ll be okay. I’m slowly but surely making my way through all of these classic NES games. I think this may have been the last full fighting game left though so it’ll be missed.