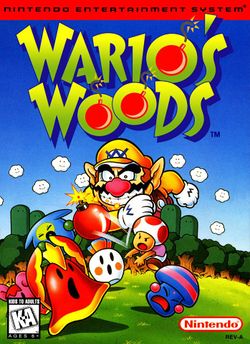 It’s time to look at another classic NES game from a while back. It’s pretty neat that Wario actually got his own game so long ago. Personally I wouldn’t have really expected that. The guy’s popular but even Luigi has only had a handful of games in his career and he’s a lot more popular than Wario. This game’s pretty fun. It’s basically a slightly different take on the Dr Mario series and that works out pretty well. I prefer Dr Mario but this one has an actual story which is cool. The story isn’t deeper than just a handful of cutscenes every once in a while but they’re still pretty cool. I’ll take what I can get.

The gameplay is all about matching the objects and destroying all of the monsters. To defeat a monster you have to match it with 2 blocks of the same color. One of those blocks has to be a bomb and then you’ve got 3 objects in a row of the same color. When you get a match then all 3 objects are destroyed and you rinse and repeat as more blocks appear. New blocks constantly fall from the ceiling so you have to move quickly. If the blocks make it all the way to the top then you’ll have lost as an energy blast instantly zaps you into oblivion. Trust me, it’s not a fate that you will want to experience. At times Wario will take control of the stage and will make the ceiling start falling towards you. That is when the stages are at their hardest so keep on matching. One thing to take note of is that you can match blocks diagonally as well so keep that in mind.

Eventually the monsters themselves get a little more powerful. The only way to defeat them is through the diagonal option and that gets really hard to do when there are monsters everywhere. Other monsters can regenerate so you have to blow them up twice within a short span of time. If you only blow them up once they go back to full power. So there is definitely an increase in difficulty to the point where the final levels are incredibly difficult. It took me around an hour just to knock out 2 near the end. Ultimately I made it to level 60 out of 99. That’s pretty good progress I’d say and kudos to anyone who made it to the end. It’s definitely a lot more difficult than it would appear.

You’ll figure out little tricks as you play the game though. You can quickly grab and then drop a piece while still moving so you sort of cheat the gravity effect. You can jump on top of a bunch of blocks by holding up when lifting a lot of them. Sometimes you will match some blocks you didn’t even know were there while jumping and placing. That’s because the blocks only have to match for an instant in order to count so sometimes I recommend just running around and seeing what sticks. It’s a method that can prove to be most useful.

The graphics are solid. I like the animations and how everyone looks. Wario definitely appears as more of a villain than usual that’s for sure. The presentation is just solid with everything appearing clearly. You won’t have any issue with wondering what is going on in the screen. The soundtrack is more on the generic side, but catchy nonetheless. It’s an easy beat to listen too as you try to make the connections. Wario’s Woods is definitely a soothing game even though it’s very difficult. You can always try again and again until you have it beat.

The amount of content here is also impressive. 99 distinct levels is more than even most modern games would supply. It’s impressive and you don’t really need any replay value other than that. There are some other modes here like a Vs. mode though so you’ve got options. I’m surprised Wario’s Woods never got a sequel or some kind of re-release. I feel like there would be a market for it and you can be sure that it would work quite well as a mobile title. Just look at Dr. Mario. That was one of Nintendo’s better mobile titles if you ask me.

Overall, Wario’s Woods is pretty fun. I appreciate the extra development time they clearly put into this. This is a game that has aged well. If you plan to play the game all the way to the end then definitely expect to stick with this one for quite a while. It’s just fun to play and the kind of game that you can plug in at any time. The fundamentals will come back to you pretty quickly but you will want to play it a lot to keep your speed up. The faster you match the objects the better in order to increase your score and make it up to the end.