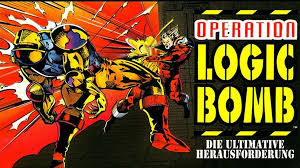 It’s time to look at a game that seems to have borrowed some inspiration from Wolverine. I don’t really know which one came first though so it’s possible that the reverse happened. Either way Logic Bomb is a pretty solid SNES game and one that has aged quite well. It’s a lot of fun and the bosses are pretty unique and challenging. If I had an SNES back in the day this is definitely a game I would have been glad to have owned. It’s got all of the solid gameplay that you could ever need.

The game starts with a lot of vague cutscenes but they seem to amount to a guy being fitted with metal into his bones. You are now a super soldier and you’re ready to save the world. Some scientists seem to have created powerful machine hybrids that naturally turned evil and are breaking the place down. You’re sent in to take these monsters down. As the game goes on you are able to access various computer terminals which give you a better understanding of what’s going on here. It’s definitely a dangerous place but you’ve got a lot of skills so you should definitely be okay. The key here is to destroy all of the monsters and advance to the end of the facilities.

The gameplay is that of an overhead shooter. Think of Centipede Infestation or Alien Syndrome and that’s the gameplay you have here. You have a standard gun with you but as the game progresses you unlock more like a flamethrower and a gun that bounces off walls. You have unlimited ammo so you never have to worry about finding any. I definitely liked that since it meant I could really go all in and not have to worry about anything. The gameplay is tough enough as is since the enemies deal out a whole lot of damage. At times you will need to pace yourself as you go in because the enemies will just completely overwhelm you due to sheer numbers. You have to hit them at an angle or trick them into approaching you one at a time.

One ability that you obtain later on is a shadow double and it is without a doubt the most useful ability you will learn. It tricks all of the minions and keeps them out of your hair as you take them out. That’s another positive about the game. I always like feeling as if the power ups are making an active difference. You should always feel like you’re at the next level with a new upgrade. If you get a weapon that’s weaker than your current one, then what’s the point right? That’s basically the same concept here and the game handles the situation well. That’s not to say that the game gets less challenging. It just has to offer up new enemies and such to try and slow you down. The final boss was certainly tough to deal with and took me quite a few tries.

If there’s something that can hold the game back it’s that it can be easy to get a little lost. The teleport pads take you to different places in a set loop but because of that you might stay in the wrong room for a while before finally trying the portal out. Once you’re free then it definitely feels satisfying to be out. A better map system would go a long way to helping out here. Still, it’s far better than something like Metroid in that regard so you still wouldn’t be lost for too long. The puzzles aren’t too crazy. The game is also a little longer than the other retro games I’ve been playing. It should last you for about 2 hours which really isn’t that bad.

The graphics definitely look pretty good here. The game handles the sci-fi backdrop rather well. The blasters are on point and the enemy designs are also good. The soundtrack also works really well and is fitting for the overall game experience. It’s all pretty ahead of its time. There is also a real story which is nice. There aren’t any text bubbles or anything like that though so you have to get the context from the little cutscenes and animations that go on. There’s more than enough context for you to put the pieces together and gets what’s going on though. Even if it may not be what the creators ultimately intended, you will still have a general story which is good.

Overall, Logic Bomb is a really fun game. It’s got solid gameplay, graphics, and a good soundtrack. The premise is really interesting as well and I’d like to see more games of this in the modern era. Nintendo’s been slowly feeding us more and more SNES games and this latest batch was definitely a very good one. I’d like to see more in the next few batches and hopefully we have more hidden gems like this one. After all, I definitely didn’t know this game existed before and now I’m glad that I got to check it out.