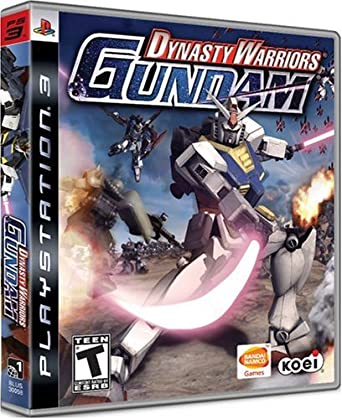 It’s time to look at another Dynasty Warriors game. It hasn’t been so long since I beat the last main title so now it’s time for a spinoff. I’ve owned the Gundam game for a very long time and did complete two of the Arcade modes a while back. I never actually reviewed it though so I went in and did another one for the review. It definitely still holds up as an excellent game and there’s a world of difference to me compared to the mainline Dynasty Warriors games. Even the gameplay itself just feels a lot better which I’m not sure is because of the character models or for Gundam they had a higher budget.

So there are two different story modes for the characters. One is the classic story which is based on events from the TV show. Then you have the original story which is the crossover epic. The crossover story involves a planet that is heading towards Earth. If it lands that will naturally result in the destruction of both planets so Amuro is ready to put a stop to this. Char has arrived and is asking for help. Can Amuro really trust Char to help him save the world or is this all an elaborate double cross? Either way the stakes are high and so Amuro really doesn’t have time to worry about this. At the end of the day he has a world to save.

The story is pretty basic outside of the main premise. You see all of the characters from the other series but we don’t have any big interactions with them or any of that. I haven’t seen the Gundam shows yet but you do at least get the general feel of their personalities. It’s sort of like a tribute to the fans but I would have liked some more bantering. Part of the fun with crossover games like Marvel vs Capcom is seeing these little interactions/potshots at each other. It’s hard to say who my favorite Gundam character is at the moment but I did like Heero here. He was all about attacking and attacking until the enemy goes down which is a pretty good plan if you ask me. You can’t win by playing defense so he made some really powerful points here. All the characters look pretty fun as expected though.

The gameplay as I’ve already hinted at here is a classic 3D Beat em Up. The idea is to take over portions of the map to weaken the opposing army. After a while their general will come out and the goal is to defeat him. I recommend taking over as many parts of the map as possible, but you do want to be careful not to overextend yourself. In Co-Op this becomes pretty easy because you can split up and each take over half of the map. When you’re on your own you just have to remember that a lot of your allies are fairly weak and will be destroyed pretty quick. Fortunately you don’t typically lose the mission on account of that. If someone specific has to live the game will tell you in the victory conditions page. I recommend looking at this page before every mission. It’s always good to know exactly how the fight must go to win or lose so you know who to prioritize.

At its core I think that’s why I really love beat em up games. On the surface it looks like you’re just an overpowered fighter taking down armies, but when you drill in to the specifics it’s really about learning how to strategize. Unless you lower the difficulty to easy you’re not going to have time to help everyone. In these games you’re highly encouraged to follow the plan of attack. If you deviate then you’ll probably lose a lot of allies. A lot of time you have to keep zipping around which will even mean retreating at times because the bosses take quite a bit of time to defeat. If you make the wrong choice you may end up losing. Your character is a lot more formidable than in Dynasty Warriors which helps you deal more damage to the army, but even here I did have to retreat and regroup a few times. I also appreciated the fact that the A.I. here is a lot better than in Dynasty Warriors. They actually assist you in a meaningful way which I was happy about.

As for the graphics, they are definitely high end as you would expect. The robots all look good and the explosions are definitely pretty intense as well. The level designs are also really great to look at. I particularly like how they incorporated space into this as one level in particular actually has to fighting in the vast unknown. That’s certainly not something you would see in a normal Dynasty Warriors game for sure. There are also some full cinematics that play through the game which all look very good. The various Gundam designs are all pretty unique and it’s fun to see them engaging in battle. The soundtrack is fairly large and works well. Admittedly you won’t hear it a whole lot as you’re blasting through everyone but it’s there all the same. The themes are suitably intense for the big moments and will give you the energy needed to clear these levels.

For replay value the game has quite a lot of it. Each story mode should take you a little over 2 hours. You can multiply that X2 for the characters who have both stories and then there are around 20 characters or so which makes for a lot of levels. You can also work on maxing out every character to improve their stats and gathering the items. All of this will take quite some time so you really won’t be running out of content anytime soon. There’s simply way too much to do and it’s part of what makes this game the complete package. The company clearly put quite a lot of time and effort into this one which keeps on holding it up as one of the best beat em ups.

Overall, If you like a good beat em up game then you’ll love this title. The gameplay is very smooth and there is a whole lot of content to absorb here. Each of the character attacks are different enough where you’ll see the benefit of switching things up. I can definitely say that the sequels are higher on my list although right now they seem a bit overpriced so I’ll hold off on that for a bit. Playing as a Gundam is just a lot of fun because of how many attack options they have as well as the stage backgrounds. It all feels very high tech and sci-fi which has really held up over the years.