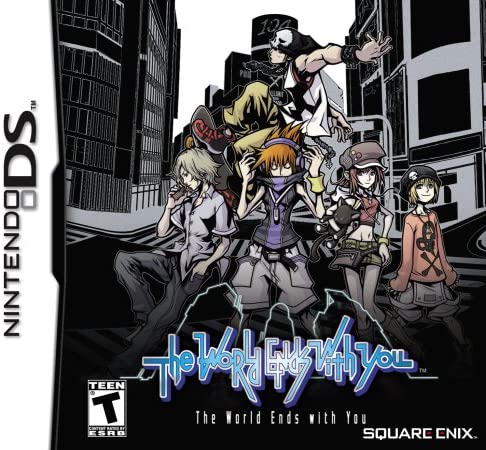 It’s time to look at a game that I’ve had on the backburner for a very long time. The Worlds Ends With You has been patiently waiting its turn for many years. Well, it was time to finally get on with it. The game was a lot of fun back in the day but I decided to replay the whole game despite going through the first loop back in the day. The reason for this is that it has been so long. I want to make sure I really know what’s going on and with an RPG like this it’s usually best to make sure you have the complete context for everything that’s going on. The game definitely does not disappoint and is as fun now as it was back in the day.

The title starts with a kid named Neku waking up in Shibuya with no memories. He doesn’t know what’s going on but a girl named Shiki shows up and makes a pact with him. Basically what’s going on here is that the characters are trapped in a 7 day death game. The way the game works is that the villains send a message every day to the characters’ phones. Someone has to complete the mission before the time limit runs out. If you survive for 7 days you win and get to leave the game. The problem is that Neku doesn’t like people. He finds them to be too loud and annoying the whole time. Neku’s a loner who is also pretty smart so it feels like he has to wait for everyone to catch up. You can’t win this game without a partner though as that’s the only way to use pins with different elemental attacks to fight off the creatures known as Noise. Neku will have to learn to be friends with Shiki or this could get pretty ugly for him.

Right away you’ll see that the gameplay here is pretty unique. It relies heavily on the stylus so get ready for that. You’ve got two screens here. On the top you’ve got your partner and you control her by using the main buttons like A, B, Y, and X. If you follow your partner’s logic attacks on the top you can get energy towards a super attack which does a lot of damage of course. On the bottom screen you have Neku and he attacks by using the pins. Each pin has a different control setup which ranges from tapping the screen to swiping or doing something else like that. The main thing to keep in mind is to read the instructions each time. You’ve also got a hub world where you can buy items or food at shops.

In this game level ups aren’t nearly as important as your stats so keep that in mind. One thing that I didn’t do was eat a lot of food and that’s a mistake. It’s the best way to get stronger. The only way to eat is to challenge more than one enemy at a time. The more stack battles you do at once (Tapping on more than one villain icon in the hub world) the more bites you take out of your food. You don’t eat much per day so try to hit the limit every time. Do that and the final bosses will be considerably easier than if you had decided to forego this. The final boss in particular is a huge step up from the rest. Make sure you equip the final pin that gets tossed at you or you’re in for a pretty rough time.

The World Ends With You is definitely a pretty high end DS game. For starters you have a very unique soundtrack that has quite a few vocal themes. Now the one catch is that there aren’t a lot of themes so you’ll be hearing the same ones over and over again. The positive here is that they’re all pretty solid so it works out pretty well. The game also has very solid graphics with full cutscenes that play comic style as the game goes on. There’s one particular one involving a gun that maybe gets spammed a little too much but it’s a solid scene. Expect a lot of twists and turns as the game goes on. There’s certainly some nice room for a sequel here.

One thing that helps this game out as well are the solid characters. It’s almost inevitable that an RPG would have a solid cast by the end but it’s still important to note in all of these. Neku is the lead and he’s very solid. He has a big character arc since initially he doesn’t get along with anybody and by the end of the game he’s mellowed out quite a bit. He’s still not cheesy or anything though as he still has some pretty harsh thoughts about everyone and isn’t afraid to speak his mind. Then you’ve got Shiki who’s a solid heroine. She’s definitely quite lively and makes for a good foil to Neku’s character. She’s always trying her best to see the bright side of things.

Beet is another one of the main heroes but he goes through some rough patches. While he gets a lot of development I can’t really side with him after what he did at the end of Act 1. He tries to walk it back later but it was a little too late for him. Meanwhile Joshua was actually my favorite character in the game. Like Neku he always had a comeback ready and he was really handling the villains pretty well. He gets the most memorable scenes in the game. Whenever he appears you knew something fun was going to happen.

For the villains you’ve got quite a few here. My favorite one was the Grim Heaper. He had a lot of good math puns and a solid design. he wasn’t afraid to get things done his way which is always important. You’ve also go the elusive conductor although he mainly just gets mentioned a lot. You’ve got two villains who are like a serious version of Team Rocket. While they try to be nice and relatable near the end you can’t forget the fact that they’re mass murderers either way. One thing you don’t want to lose sight of is the fact that this is a murder game. Keep that in mind when all of the twists are happening. No matter how you slice it that means all of these guys are knowingly complicit in these actions.

Overall, The World Ends With You is a pretty great RPG. It’s got a solid set of characters and really nice technicals on its side. There’s a good amount of replay value since you can warp to any of the previous days to do any missions you skipped. It’s a game that gives you a lot of options for what you want to do next and the length is pretty good as well. With news of the anime coming up the series is definitely staying relevant. As long as you like a good story then this is a game I recommend to any gamer. It’ll definitely hook you on the interesting premise and solid characters.