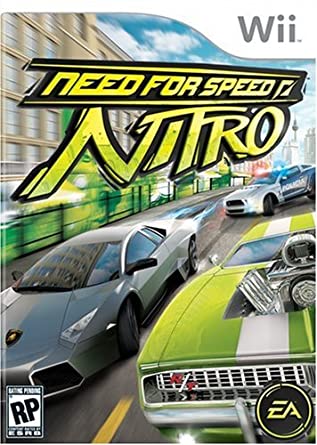 I’ve really been making great headway on these Need for Speed titles haven’t I? Nitro is the only Need for Speed game that I have on the Wii and it makes for a very different experience. All of the other Need for Speed titles that I’ve played have felt a lot more on the realistic side compared to this one. Maybe at most you could say that Hot Pursuit II was closer to Arcade style but even that one wasn’t to the same extent. This one’s definitely going for that retro feel and it works out quite nicely. While I would have to say that it’s probably the weakest Need for Speed game by default, it does understand the series a lot more than Drift.

You start the game by being introduced to the main campaign. There are 3 cups, Bronze, Silver, and Gold. Effectively they are all the same game but just with different difficulty levels. You have to do them in order though. When you enter the Bronze cup you are given around 5-6 cities. Your goal is to earn 100 stars which will let you enter the Grand Prix. Once you win that, you will unlock the Silver Cup so rinse and repeat until you’ve won them all. Not a bad deal right? The star system is very similar to Drift. It means that you don’t necessarily have to win every race but it does help. There is less margin for error here compared to Drift as you do need the majority of the stars in order to qualify. I believe there are 128 stars in each world so you can only miss 28. I recommend not losing.

On a more serious note, this game does introduce a certain amount of RNG within the game that means you can’t always guarantee yourself a victory. Sometimes things will happen that you just can’t control. For example, a new mechanic to this game is the Shield weapon that you can use. What this does is it summons the cops to attack a player of your choice. It’s a pretty powerful attack because there’s not much you can do. They run you off the road or if you’re really unlucky they’ll keep spinning you in a circle so that you can’t reset. It’s a fun way to include the cop presence here since there’s no free roam available. Drift probably should have done something similar although I’d say in just one kind of mode. For the most part I still like my normal racing.

This is the kind of thing that’s good as a side gimmick because of how it’s a change of pace. I don’t know if it would work quite as well if this was happening constantly. As the title suggests, this game also focuses a whole lot on the Nitro mechanic. So you’ve really got to make sure and boost a lot. It’s also crucial for a lot of the bonus stars which are score related. When you do a super boost it really has a noticeable impact on your points. I dare say that getting some of these bonus stars would not be possible otherwise. Boosting is fun though so I recommend it either way. It really gives you a jump on the competition.

The game can be a little tricky at times but really just because of the controls. I played this one through the Wii U so I wasn’t able to use the adapter to play it. As a result, I had to use the ole Wii remote. Surprisingly they don’t let you hold the remote sideways, you have to use it pointing at the screen and tilting which is an odd way to approach this. I suppose I’ll give the game some credit for going in a different way but I dare say that it was the wrong way. In particular this gets tough for the drifting levels where you have to try not to hit too many objects as you get to the goal. Not to be confused with the Drift levels where you max out your score. I believe the former is officially called Time Attack here.

I do like the graphic style though. It’s definitely going for a bit more of a cartoony hand drawn style. You have little cutscenes before every world which I appreciated. It at least makes the game appear to have more of a story. It may not be much but it’s a start I suppose. The game isn’t particularly long if you stop after 1 cup but playing all 3 should stretch the time out to around 7 hours which is pretty solid. Once again, the cars you buy are important here. There’s no upgrading so just focus on buying. I say try to survive on your present car for as long as possible and then upgrade. It can be a difficult thing to do of course, but it really pays off in the end.

Overall, Need For Speed Intro is definitely very original and in this case it worked out in a good way. Perhaps total free roam would have been a little too much for a quick Wii game so going full on arcade racer was the next best thing. With non motion controls this game would be even better. I like how fast you can drive around and the level designs were on point. I feel like this game had a good amount of energy behind it which really makes a difference here. It didn’t feel phoned in or anything like that. If you’re looking for a more upbeat kind of Need for Speed title then this is the one for you. It’s very easy to just plug and play which is probably the idea.