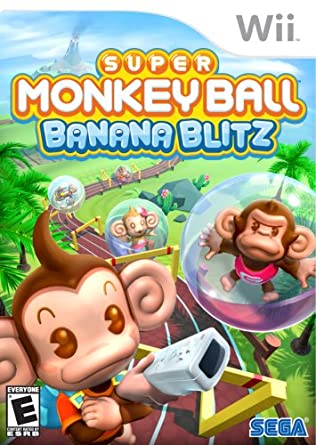 It’s time to play a game that relies on 100% complete motion control abilities. As you may suspect this can get a little dicey due to the fact the Wii motion controls can be pretty bad all the time. There’s just no getting around that and since the Monkey Ball games have always been built around having a lot of precision, it makes for a messy experience. Throw in a few poor design choices and this game was ultimately not able to rise to the level of what I would consider “good”

There’s a story mode although it’s incredibly basic. There’s an opening and an ending but that’s really it. The general plot is that a villain has stolen the legendary bananas from the world. It is now up to Aiai and the crew to bring these fruits back. The most difficult part here is going to be the fact that these monkeys aren’t really all that powerful. If we’re being honest here they’re a little out of their leagues. Fortunately the monkeys do have their rolling balls at the ready which should help to bridge the gap here. So long as they roll quickly and with purpose they should be able to claim victory.

There are 8 worlds to navigate through. Each world has 8 levels in addition to a bonus level and a boss stage. The key thing to remember here is that you have to clear all of the levels in one sitting. You can’t quit and then try again later. You do have unlimited lives though is nice. Watch out though, every time you get a game over the game asks if you want to continue. If you hand shakes even slightly then you may end up saying No which will erase your progress. It’s one of those things where it feels like the game just wasn’t play tested enough. Why was something like that not caught earlier? You should be able to quit a different way where you don’t risk the whole world. Additionally there is no way to pause during a level. Yeah…that’s pretty iffy. You can override it by using the Wii home screen at least so that’s a nice workaround. There should be some way to save your progress during a world as well. Otherwise in the final levels you may find yourself stuck for 30-40 minutes and not be able to leave since you don’t want to start over. These are the kinds of quality of life updates that the game desperately needed.

The main gameplay is simple enough. You roll through the levels in hopes of grabbing a big ring at the end. Once you clear it you will have completed the level and moved on to the next one. The first levels are almost insultingly easy while the last ones are criminally hard. I still hold to the stance that the first two games had more difficult levels but the controls here do ultimately make this a lot more challenging. It’s just hard to get the ball where you want it to go at times. Just moving in a straight line while have you shaking from side to side quite a bit. That said, straight lines were never really my specialty. I go with a more custom style of drawing.

The game definitely does get creative with the levels so I will give it credit for the designs. Each world does feel different and the game does take advantage of its unique gameplay style to offer up a lot of different experiences. No two levels are the same here which is definitely a good thing. The most difficult level for me was the large tower in level 8-7. It’s hard to go down the tower and then once you do the final jump is incredibly difficult. You really need to take that at the perfect angle or you ultimately don’t have a shot. Trust me, it’s more difficult than it sounds.

The graphics are solid. This game definitely looks nice with its colorful effects. That may even be the highlight of the game to be honest. The soundtrack is less memorable. It has a few decent themes to be sure but I wouldn’t say that any of them are particularly great or anything like that. They aren’t particularly memorable at the very least. The overall game’s story will probably take you around 5-6 hours give or take. It really depends on difficult you find the controls and levels to be. Technically if you don’t lose much in any of the levels they only tend to be 1-2 minutes long so you can breeze through the game way sooner. I find it pretty unlikely that someone would be able to beat this game without a lot of deaths though so I don’t see it being too short. The game also has a lot of replay value with the minigame modes and general multiplayer here. There’s definitely a lot of content to enjoy as Monkey Ball did not forget that as its core it is a party game that is meant to provide a lot of fun and excitement to everyone.

Overall, Monkey Ball is a franchise that I enjoy quite a bit but this was the weakest installment I’ve completed. Once I get back to Adventure and complete that one it’ll likely reclaim the title but it’s just hard to be weaker than Banana Blitz. This game just really didn’t have a whole lot going for it. the controls just held this game back more than anything else. The story mode goes out of its way to make the bosses not very cool either. Their weakpoints are certainly not very ideal in combat and make things a little on the dicey side. If you like testing your balance then I would sooner recommend playing one of the original Monkey Ball titles. That said, if you see this game on the cheap then it’s not a bad title to snatch up. I think you can get it for under $5 sometimes now.