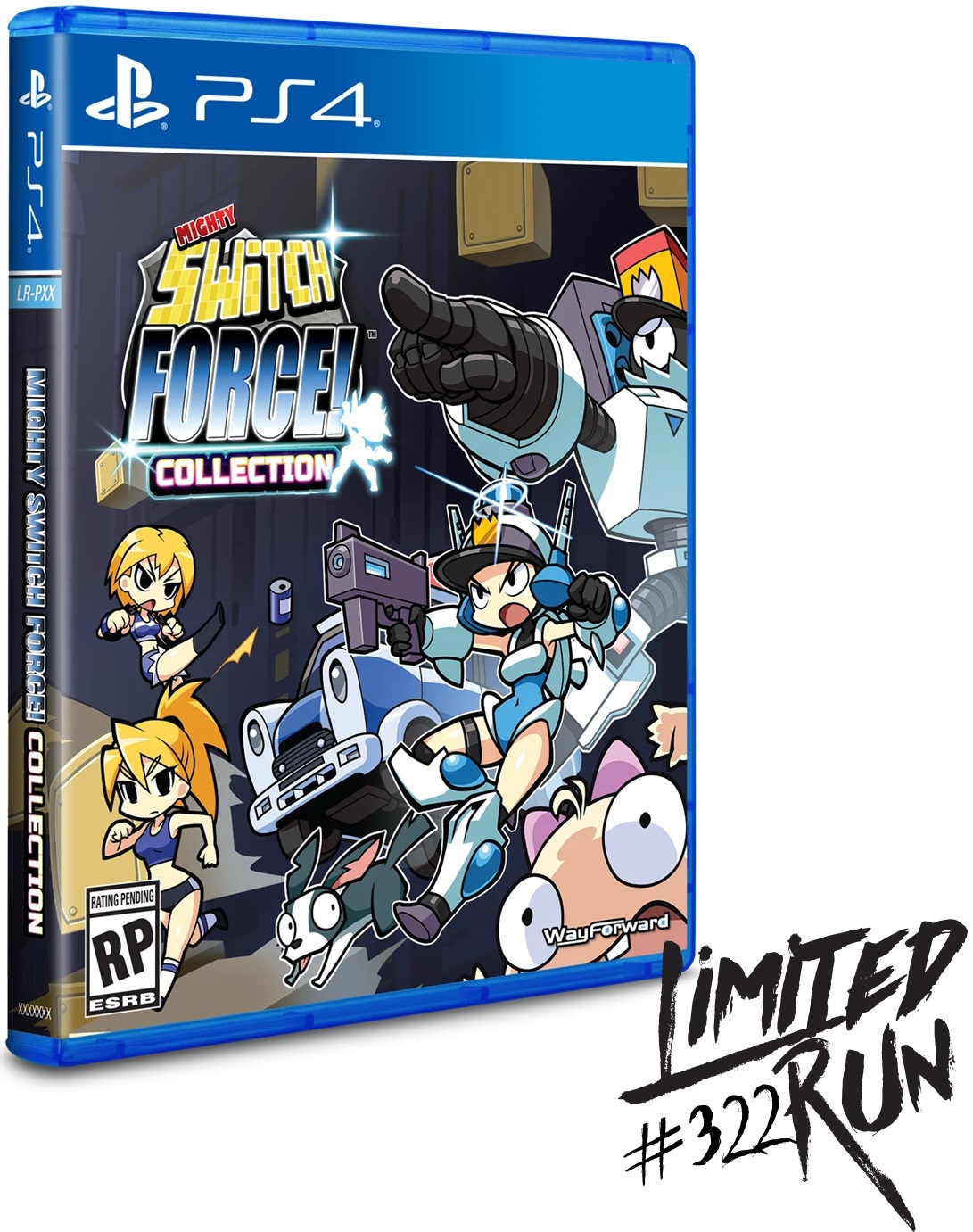 It’s time to look at a collection of platformers that now have a physical release all bundled together. I’ve seen images of Switch Force before very briefly but I can’t say I knew the first thing about it. Well, now that I’ve played all of the games I can say I’m a seasoned pro. It goes in on the puzzle genre and mixes platforming into it pretty seamlessly. It’s a fun bundle of games to play through. You should be able to complete them all pretty quickly although the last levels get pretty difficult so you don’t want to take them lightly. Each game ends with a final level or two and a big boss that definitely isn’t playing around.

There are 4 games here but effectively 3 when you consider that the first game is here twice in its normal state as well as an enhanced version. Each game uses a different mechanic to keep things fresh to Switch Force lives up to its name in switching up the experience each time. Lets tackle the first game to start with. You play as a police officer trying to put a lot of criminals back in jail. Each level has 5-6 prisoners who have escaped and you have to navigate through the level and save them. The gameplay is that of a 2D platformer but the levels aren’t linear. The prisoners are scattered in random places so you have to solve puzzles to find them.

You have a blaster that you can use to help you here. Aside from running and jumping you also have the unique ability to get the blocks to fall out of alignment. For example, you’ll cross a bridge that has 3 red blocks and 3 blue blocks. Every time you activate your skill, the red blocks will become intangible while the blue ones appear and vice versa. That’s a very basic example, the game definitely goes all in with the strategy here. Your reaction times will be especially key since you often have to make the switches rapidly and without delay. The last few levels of each game always get very difficult with this. It’s a fun take on the puzzle approach. Some of the Mario games have a similar gimmick with blocks appearing and disappearing but you could never control them. Since you have full control here that really lets you experiment.

The second game has you play as a firefighter. The gameplay itself is the same though with the difference being that instead of blasting enemies you are using your water hose to hit them with water or put out fire. The boxes remain your main obstacle as you try to weave in and out of the levels without letting yourself get caught in the trap. It’s a difficult endeavor but not one that is impossible if you tackle it calmly. I should mention that you have 3 health points in each level. If you lose them all then you are sent to the start. I can’t say that it happened to me very often but it’s still something to be aware of. Make the most of the health packs the enemies drop so you are always prepared.

Finally the last adventure has you playing as a cadet in what is seemingly a simulation for most of it. It’s like the first game but the main difference is that this time the screen is super zoomed out. The walls are also like some of the classic NES games where instead of dying if you fall through the ground you’ll come out of the sky. Likewise you can go off screen from either side and pop out the other. This gives you a lot of new variations to the puzzle as you have to use this to your advantage. The game also uses more of the cannons in a DK sort of way so you’ll need to incorporate that into your platforming.

I definitely enjoyed going through these puzzles. Switch Force shows us how games should present the puzzles. You’re never wondering if you’re going the right way or doing what you’re supposed to. The answer itself is made obvious but the path to getting there is what will likely trip you up. You can’t let your guard down but also don’t overthink what you should do. A lot of times the best way forward is to just give your plan a shot and if it doesn’t work out then you’ll only have lost one health point. The toughest level in the game involved doing a double jump with two switches in the air. At one point I wasn’t sure if I should maybe be trying a different tactic but in the end it worked out. You just really needed perfect platforming.

The graphics for all of the games are definitely pretty solid. They’ve definitely got a very modern look to them and have that Mega Man sci-fi vibe. Everything is very futuristic after all which isn’t really a surprise. These guys are future cops and firefighters tackling next generation’s issues with their blasters and other tech. I’m always up for a future setting so I was definitely on board with this. If you ask me it’s the best setting the game could have possibly chosen here. The soundtrack is pretty solid. It’s got a quick beast and is meant to be solid background music so it’s not really distracting. You’ll be totally focused on the actual puzzles after all so you won’t be noticing the music quite as much.

Overall, Mighty Switch Force is definitely a fun collection. I can definitely see why the games would have all gotten their fans and been well enjoyed by the players. The level designs are on point and there’s enough variety where you always feel like you’re in for a new experience. The puzzles can be difficult but they’re never unfair. Since the controls are fairly simple it all comes down to your hand eye coordination at the end of the day. Once you have that on point then you should be just fine. Fortunately in the boss levels you have a checkpoint since solving the puzzle and surviving would be a difficult ordeal. In the final game in particular I died quite a few times. If you enjoy platformers and trying to reason your way through a level then this is definitely a game you should be checking out.