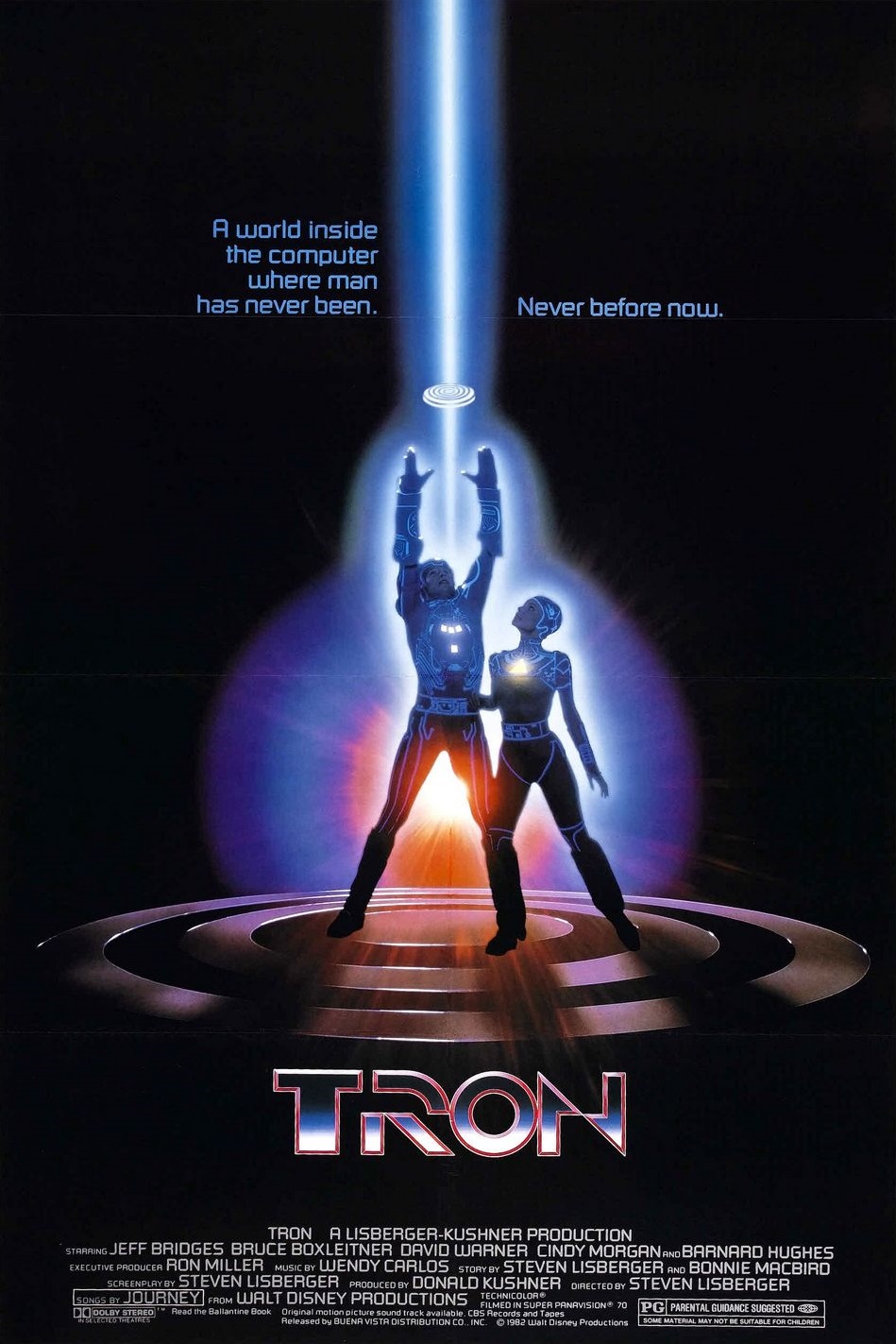 It’s time to take a look at the original Tron that came out a long while ago. It’s definitely always fun to have a Sci-fi adventure where you fall into a video game. There have been numerous series about this over the years and that’s because there’s just so much potential there. This is a solid film that has aged pretty well. Flynn’s still a great main character and I like the effects/atmosphere.

The movie starts by introducing us to the legendary company ENCOM. It’s led by Dillinger who got to the top by stealing all of Kevin’s ideas and making millions off of them. Unfortunately Kevin was unable to prove that he created them and so he had to settle for running an arcade. Since then Kevin has decided to devote his life to breaking into the system and finding the evidence. His time to shine happens when Alan and Lora pay him a visit to let him know that the Master Control Program is on to him. Kevin decides to try and free Tron but the program is one step ahead of him and launches the hero into the game. Can Kevin get back out of the system or is it too late?

The Grid is definitely a fun world to be stuck in. It may be pretty dangerous but playing through games like the Lightcycle or the disc throwing definitely looks like it would be a lot of fun if you ask me. The world still looks really good even when watching in 2020. The good programs are definitely on the losing side, but at least they have Tron around to help out. He’s easily the most powerful good program out there. He makes for some good banter with Kevin and the third member of their party.

In general Kevin’s just a fun character to have around. I like his complete confidence which you see even in his very first appearance. The guy isn’t even remotely afraid of going up against the MCP and has fun messing with the villain when he first hops onto the computer. Naturally he is a little less powerful once he is in the game but still does his best. The guy is always ready for the next move. Then you have Tron who is very serious the whole time. He’s really just about completing his mission no matter what and he must have been stuck in this game for a long time. They mention that time works differently in the game world so for all we know he’s been here for years or something which is crazy to think about. He may not get as big a role as you might think but he’s definitely very memorable.

Alan’s a good red herring here since you originally feel like he will be one of the main characters then he vanishes after the intro. He was cool while he was around though. Maybe not the most memorable but he was definitely on board with Lora’s plan right away. The film throws in some slight romance in both worlds but neither one really goes anywhere. I do think Yori going with both characters was a bit unneeded though. I don’t really see what the point of those moments were. Probably just to squeeze a bit of romance in.

Dillinger made for a pretty fun villain. I’m always ready for those CEO types. He doesn’t do a whole lot to make himself a memorable villain compared to other similar figures but is still a solid addition to the cast. The Master Control Program is a little less notable. I liked the presence he brought to the film for the most part but it was a little harder for me to take the design seriously. He reminded me a bit of Modok or the Kree intelligence. Giving him a bit of a more compact form to fight with the heroes would have been pretty neat.

One of the big strengths of Tron is how great the cybernetic world is. This is the kind of world you could definitely see yourself getting stuck in and not mind so much. It’s all pretty interesting. The graphics/effects are on point and the soundtrack is good. It’s definitely one of the first big “stuck in a video game” movies out there and handles the genre quite well. Mix that in with quality writing and you’ve definitely got a winning combo here.

Now, if I nitpick a bit here, I have to question why the Master Control Program doesn’t take a more aggressive approach here. It should have been easy for him to stop Tron and friends many times before they got so far away. He controls the sector and every program in it. We saw that when he launched the tanks they were able to deal a lot of damage. Why not make sure that the heroes he blasted were actually dead? Crushing the programs there would have been huge and you’d think he could feel their presence the whole time. I suppose the easy answer to all of this is just plain arrogance though and I suppose you can’t really argue with that. At the end of the day he just thought that nothing the heroes did could really matter and that led to his downfall.

Overall, Tron is definitely a solid film worth checking out. The effects are solid and it has good writing and pacing throughout. The character cast is definitely solid and there’s really a lot to enjoy here. It was a good way to start off the series and of course Legacy would then take it to the next level. Watching both back to back is a good way to really see all the connections and how much the Grid has evolved. The themes of A.I. growing sentient are still pretty interesting since we get closer and closer to A.I. being able to reason. Ideally we won’t all be thrown into the grid though but if that should ever happen just make sure you have your gaming skills on point.