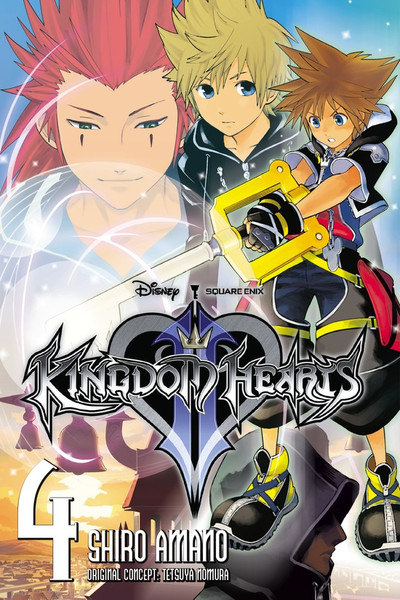 This is another manga where I got to start it a long time ago, but didn’t finish until recently. The manga needed a remake for the ending to finally make it to America. Well, it’s definitely a pretty fun adaption. It doesn’t do much to go above and beyond what it was given from the game, but still puts a good amount of effort into it, making this a solid manga to read whether you’ve played the game or not.

The plot actually begins with Roxas since due to the ending of Chain of Memories Sora is still out of commission. Roxas gets to enjoy a few days with his friends, but quickly finds out that his destiny is a sad one as he must fight his way to Sora only to give his body up and fade away as a Nobody once more. A Nobody is a character who is a literal shadow f the main body and while Roxas can keep his soul, he loses his heart. The process is rather intricate, but the long and short of it is that Roxas makes the hard decision to sacrifice his life. We then go back to Sora as he must lead Donald and Goofy on one last mission to take down the evil Organization XIII and save the world. The villains want to use Kingdom Hearts to open the gate between dimensions and I believe this will end up destroying everyone or swapping places with the Nobodies. It’s been a while so I’m not 100% concrete on the details. It doesn’t change the mission of the heroes though and Mickey/Riku, as well as many other fighters are doing their parts to stop the organization as well.

While the manga can’t get to every single world it does adapt as many of them as possible. As it’s the longest of the Kingdom Heart manga titles, I would expect no less. Kingdom Hearts 358 seemed rather long at last check though, so I’m only fairly certain that II is still the longest. It gives you a good amount of time to get used to the characters and see the universe as opposed to jumping from fight to fight like in many adaptions. Although, that is a really good tactic to use as well if we’re being honest. The manga is certainly a direct continuation to the others though so I would recommend checking them out before reading this one. I’m fairly certain that it will help you enjoy this one more.

The art isn’t bad. When the manga goes for its action scenes it can get quite detailed. Not in a convoluted way, but in a way that enhances the action. Sora’s rage mode is depicted well towards the climax when he believes that his friends were murdered. On the other side, the manga does rely a little too much on exaggerated facial expressions for the gags. A tense scene will suddenly turn into a comic relief moment at the drop of a hat. I think the game did a better job at separating the comedic and tense moments and never being too over the top with the comedy. While those artistic moments aren’t my thing, it’s not a case of the art being bad. It’s probably one of the better manga adaptions when it comes to art.

My only real negative with the series is what I mentioned in the art section right above this. The big jumps from comedy to serious to comedy again can be a bit jarring. I think the manga probably goes a little overboard on the comedy instead of being more subtle. Still, that’s basically it and when that’s your only negative you know that the title is pretty good. The series ends with a mild cliffhanger as the heroes are called away to the castle for some reason, but you could also interpret it as just the manga’s way of saying that a hero’s journey is never over. I barely count cliffhangers like that myself for this reason.

Sora is still a solid protagonist as always and I do like him more here than in the original Kingdom Hearts. Sora is a lot more confident in his abilities at this point in time and has proven himself on many occasions. He can definitely fight with the best of them now and his new costume is cool as well. His final team up battle with Riku is definitely a lot of fun and it’s a fight that the original Sora would probably have had a lot of trouble with. Riku’s role here is certainly not as shady as in the original game since by this point he has basically mastered the powers of light and dark. If you think about it, it makes sense that he would be one of the strongest characters in the series. It’s rare to wield both elements.

Most of Organization XIII shows up here and many meet their demise which basically closes this chapter of the series. They all have their own unique personalities which is good. The best member is probably Xehanort. He has a great design and can fight really well too. I also liked the member with the blue hair (Vexen I believe) and Axel isn’t bad either although he can be a little wishy washy. The group definitely has a lot of real characters in their ranks.

As far as the Disney characters are concerned, they all appear to be in character. Even though the crossover is mainly with the Disney characters, I admit that I look forward to the Final Fantasy ones more anyway. Unfortunately I don’t think they actually keep in the Cloud vs Sephiroth fight, but it’s possible that I just don’t remember it. It’s been a long time since I read the first few volumes of the series after all. It’s still hard to believe it went on for a full 9 volumes before being re released in the omnibus format. So while I don’t mention the Disney characters much, their inclusion definitely makes the series even more fun. Who doesn’t know the classic Disney characters like The Beauty and The Beast? While I can’t really take them seriously in a fight against the Organization characters, I suppose they’re tough enough for the Heartless. It’s always good to see a familiar face among the characters and hopefully for Kingdom Hearts III we finally get the big team up with all of the old Disney and FF characters for a big climactic battle. 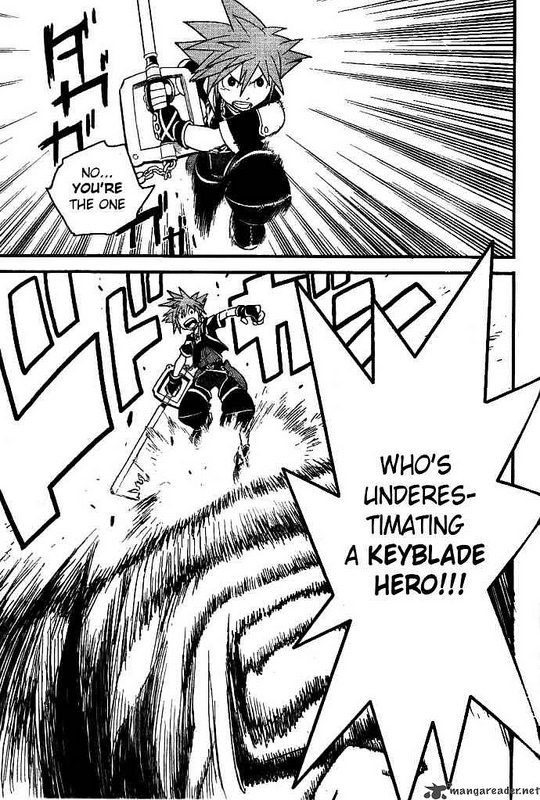 Overall, This is definitely a fun manga. It’s got a good amount of action and a good cast of characters. I’d definitely recommend checking it out. It’s probably the best of the Kingdom Heart manga titles although Chain of Memories puts up a good fight. I always really liked that game/manga. It was short, but had a bunch of fights. It’s similar to the Battle Frontier in the Pokemon anime. Still, with the extra volumes Kingdom Hearts II definitely had more time for a lot to happen. Reading all of the different titles back to back would probably be fun. It’ll be tough for 358/2 to top this one, but I’m looking forward to seeing it try its best!

Tron is back, but I’m afraid that it’s not for a win. Pikachu is just too fast for him at this point and one good Volt Tackle would end things. Tron just doesn’t have any defense against these abilities and he won’t be able to hold out. These last two matches haven’t been kind to good ole Tron. Pikachu wins.

Tron can throw his discs around, but Charizard is just too fast for that and one good fire blast would be able to derezz Tron. Tron is quick and I wouldn’t want to underestimate his skill, but Charizard has his Mega evolution at the ready. Tron may have lost this match, but he’ll be making a return very soon. Charizard wins.

Inspector Gadget is a pretty tough detective, but Tron’s got the speed advantage. He’s taken on many fighters and always proves that he’s one step ahead of the pack. With his disc he can make nearly any throw. His hand to hand skills are also top notch so I’m afraid Inspector Gadget can’t win this round. Tron wins.

Tron is obviously the better fighter here. In terms of hand to hand combat there are few who can rival him. Of course fighting skills don’t help much when they won’t actually hurt. Tron could hits The Nirvash hundreds of times and I doubt the disc would really hurt him much. The Nirvash also has cool beams. Nirvash wins.

Tron’s got his cool motorcycle and with it he can go faster than the boundries of cars allow. Kite has his twin blades, but in the end they aren’t powerful enough to take down Tron. Tron goes higher and shows the world his power. Tron wins.

Trevor Fitzroy has some mild powers. They can help him in other fights, but in the end Tron is out of his league. With his disc throwing skills he could take out Trevor Fitzroy out fast. Trevor Fitzroy can’t win. Tron wins.

This is a tribute to Tron. Tron was okay and at least he could fight. Sadly for him he didn’t look quite good enough to get himself a win. Vegeta is his opponent and that means annihilation. Vegeta wins.