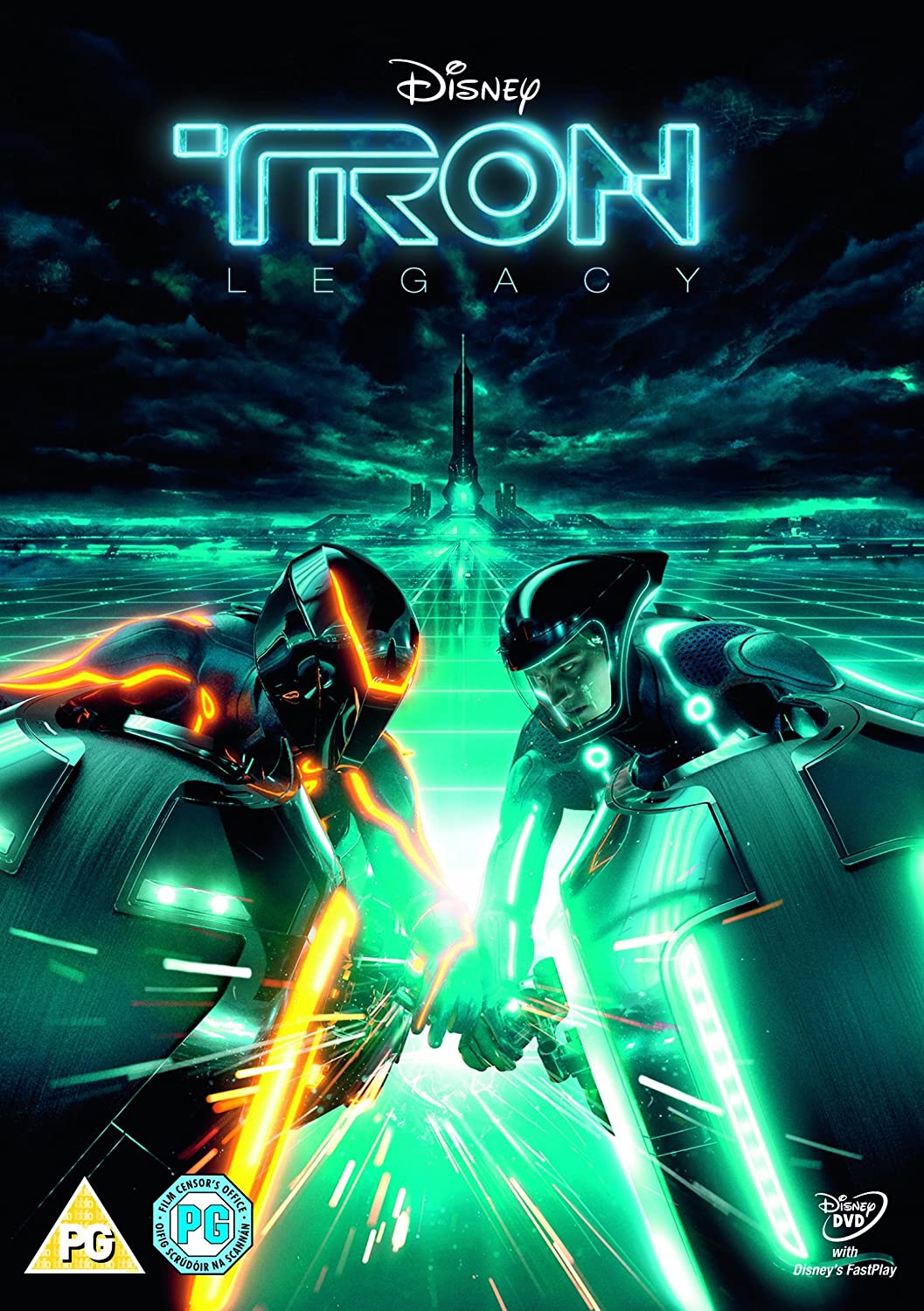 It’s time to look at the sequel to the original Tron. I remember how impressed I was when I first saw this title. The effects just looked flawless and the film as a whole really had a great high energy feel thrown in. The characters were cool and this really felt like the series was completely on the right track. It’s a shame that the third one is taking so long to come out. Well, the film definitely holds up and is just as great as I remembered it to be. It’s certainly underratted.

The movie starts by explaining that Kevin has vanished and so his son Sam had to grow up without him for a long while. Sam is now the chief for the company but he just doesn’t really see the point. He wastes his days away doing nothing until one day Alan shows up and tells Sam that he received a buzz from Kevin’s pager. Sam heads to the arcade and is blasted into the grid. There he meets up with a program named Clu who rules the Grid with an iron fist. Kevin has been exiled to the wastelands and resides with another program named Quorra. Quorra helps Sam escape and now they must think of a plan to get out of here. The main issue is that the heroes are completely outnumbered here.

Things tend to happen very quickly here which is always nice. There is no dead time here. The heroes are on the clock and have to do what they can. The film shows right away how much the Grid has changed since the first film. The “graphics” have gotten a lot better so the programs now look like people. Time travels differently in the system so it makes sense that everything has been updated. We now have more action scenes on the Lightcycles and disc throwing games. Those are still a lot of fun and I wish we could get more games with that kind of gameplay. It’s one thing I really liked about the Tron Evolution video game back in the day. It’s fun to watch as well and is just a fun way to race.

The hand to hand action scenes are also on point. We see one flashback where Tron was taking on a lot of opponents this way. I do question how he was overpowered so easily with the final opponent though. That guy didn’t seem so skilled. Of course I blame Kevin more since the guy didn’t do anything to help that time. He was okay with just watching the whole time which was definitely no good. In the present we get a lot of action scenes like this as well such as in Zuse’s bar. That was a fun action scene for sure and the mysterious right hand man of Clu always provides some good action.

As I already mentioned the film just looks great as well. The Grid really stands out in every scene it is in. Any scene in the Grid is bound to be a good one and that’s definitely really good if you ask me. Whenever I talk about films needing to have interesting backgrounds to help the story along, this is exactly what I am talking about. Legacy is ahead of its time in many ways to the point where it’s hard to see many other films topping this one. The outfits just hold up so well and everything about the film still feels futuristic even many years later. The writing is also on point here as we have a solid cast of characters.

Sam is the lead this time around and he’s defintiely solid. It’s easy to see why he has decided to goof off nowadays since with his Dad missing he doesn’t see much of a point in anything. It all just happened too suddenly for him. In the Grid he quickly gets caught up to speed and comes up with some plans. I’m glad that he wasn’t as passive as Kevin was with the ideas. Sam just wants to save the day and he’s ready to take some risks to do it. Kevin is a far cry from his older self. The whole battle with Clu just broke him I guess. He’s now quite scared of going back in to fight. He should also be ashamed due to the fact that if he had helped Tron out in the past then none of this would have happened in the first place. His Star Wars esque abilities are fun to see though.

Tron is definitely a great character even if we don’t see him a whole lot. We learn what happened to him since the first film and it makes for a great role. He’s still the definitive character in the series to be sure. I don’t see any of the other characters really coming close to matching him. At the end of the day Tron is just a really impressive character and the best fighter in the series. It’s the reason why he is known as the hero of the grid. Then you have another hero in Quorra. She’s definitely good and has several pivotal moments in the series. Quorra is a lot bolder than Kevin and certainly wants to help out even if she isn’t quite as aggressive as Sam. She makes up for this with her superior fighting abilities though. She certainly gives the villains the work on several occasions even when she is outnumbered. Without her Sam would have definitely been in trouble several times here.

For the villains I’d say that we really have Clu as the main one. He shows up rather quickly and gets involved in the action personally. Right away that’s when I knew he would be a good villain. Good villains aren’t afraid to get into the ring themselves. It’s what separates the truly feared leaders from the guys who just sit in the chair. I was very satisfied with his portrayal and his reason for fighting was also a good one. He saw some flaws in the world and was trying to fix them. At the end of the day isn’t that exactly what you want the program to do? The only miscalculation was that the program would be so effective in its mission but who could have predicted that right?

Then you have Zuse who definitely likes having fun with the case. He’s not the smartest character in the film though. The guy acts like he is intelligent sure, but that’s not really enough when his actions are so weak. When you enter into a deal with the main villain you should always make sure you have some kind of leverage or a backup plan. He had neither but it did make for a cool visual and a fun scene in general. Clu’s right hand man is pretty great. He’s a man of few words but really delivers on the action scenes and gets a great arc/final scene.

Yeah there’s definitely a lot to like here. The soundtrack is also pretty stellar with some 80s type songs spread into the early part of the film as a tribute to the original. In some ways it embraced the era more than the first film did. Don’t expect to see the present timeline much since most of the film takes place in the game. That’s definitely okay with me though. The game is where all of the interesting things are going on so that’s really what I’m interested in seeing and it delivers. I sort of thought the board would have a bigger role or at least the main one who seemed to be leading the company down a corrupt path again. Maybe that’s something for the third film.

Overall, Legacy is definitely a great follow up to the original Tron film. It’s got great action, characters, a solid plot, solid soundtrack, etc. It really manages to get just about everything correct which is definitely good. I highly recommend checking this film out. It takes place far enough after the first film where you don’t need to see it to understand what is going on, but it does help you recognize the various Easter eggs here and there. It was fun to see this one have so many tributes to the first. Well, supposedly the third film is finally coming out sort of soon so I hope it’s able to maintain this level of quality. It’s definitely a tough act to follow.