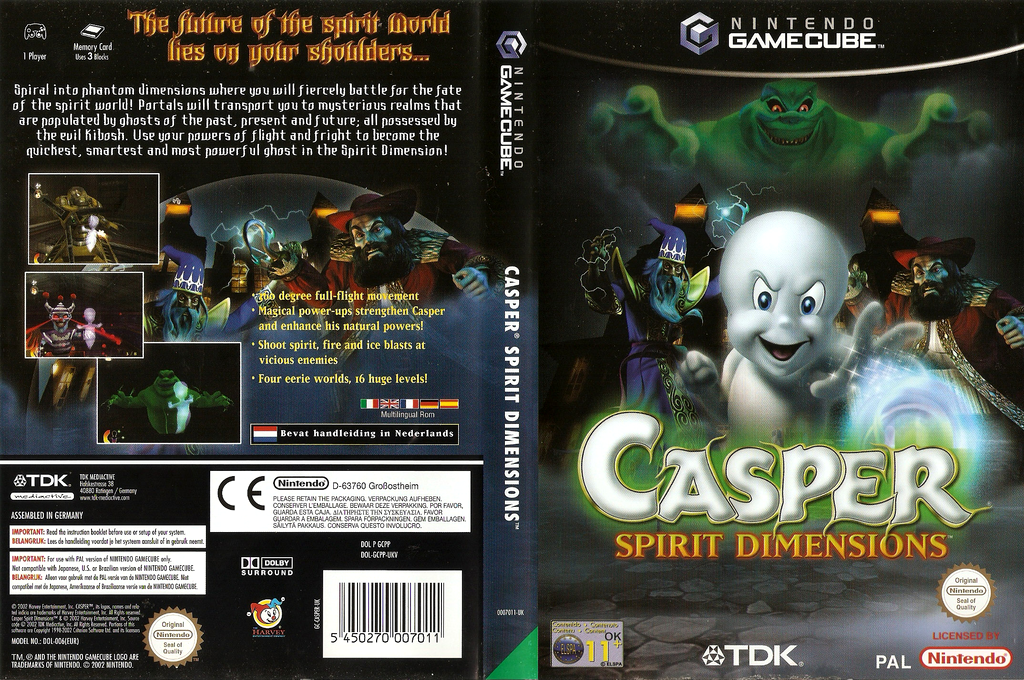 Casper is one of those characters that I don’t know nearly as well as I should. The ghost’s a bit of a mystery to be honest but I do know that he’s about as friendly a guy as you’ll ever meet. The game was sitting on my backlog for an incredibly long amount of time in part because the first few levels weren’t great and also because the old TV had a really hard time with loading up old graphics. Well, now I was finally ready to give this another go. The game isn’t very long at all and makes for a decent playthrough. I’d say the game still has some gameplay elements holding it back but you should still have a good time for a few hours until you complete it.

The game starts with Casper noticing that the house is rather empty. Wendy shows up and lets him know that a powerful being known as Kibosh has appeared and taken all of the ghosts down. Casper is the only ghost left who is not enslaved or now working for the villain. She pleads with Casper to help but the young hero is reluctant since he believes that a friendly ghost won’t be enough for this mission. He keeps bringing up the fact that he is a friendly ghost as if it was a weakness. If only he knew that this was what made him strong. Still, in the end he does decide to help. Can Casper take this guy down?

The game has 4 worlds. Most of the worlds are pretty quick. In general you can even beat the game in around 2 hours based on videos that I’ve seen. It took me considerably longer than that though, I want to say around 5 hours or so. Mainly it can always be tough to find some of the collectibles. This game is a 3D platformer but at its core a lot of emphasis is put on collecting things. Whether it’s buttons, cannons, or something like that you’ll always be trying to find something. Keep on searching long enough and eventually you will be able to get at it. Usually the final collectible is hidden in a rather unique place like through a tunnel or past a gate somewhere. So just don’t give up.

Each level has a similar formula like that. Someone will tell you to locate the 5 pieces and once you do then he’ll give you a piece of the next collectible. Once you get the rest of the items then you’ll be able to challenge the boss of that world. Most of the bosses are pretty straight forward. Just spam your energy blast and you’ll be okay. Alternately some bosses will have you focus on a weak spot first. That’s the case in the final boss. Make sure you blast at him so he drops some energy which will power Casper up and allow future blasts to hit him.

As Casper you have quite a few attacks. You can charge into enemies to deal some pretty solid damage that way. You can fire classic energy blasts, fire blasts, and ice moves. You can also use some energy to shoot a charged blast or an electric move. Then you’ve got the ability to turn intangible for a few seconds which will prevent enemies from hurting you. It’s pretty handy in the final boss but otherwise you’ll just be using this for puzzles and to find more collectibles. The fact that you can fly without any time limits is nice. It feels like a lot of games don’t let you do this so I’m glad Casper didn’t think of some crazy reason for why we wouldn’t be able to do this. It absolutely would have felt very forced, I can guarantee that.

The difficulty is pretty reasonable. I wouldn’t say the game is all that hard but you can’t be sloppy either. If you just fly into the opponents and start blasting at random then you will absolutely be defeated. You have to go in with a certain degree of caution. The best thing to do in the game is strafe around the opponents. Hold R as you move and you won’t get hit in a 1 on 1 battle. You’ll always be around the corner and that’s pretty key here. If you keep that in mind and also the bit about the collectibles then you’ll be good. Please note that if you fall into a portal during a mission then you have to start from scratch so don’t let that happen to you. I’m guessing it saves the game some memory doing this but it can be pretty easy to fall into one, that’s for sure. Slow and steady wins the race here.

There isn’t a lot of replay value though. I guess you could go back to try and gain some more gems to improve your overall completion% but I don’t see how it helps at all. There don’t appear to be any rewards for doing so which definitely seems like a mess. If you really enjoy the gameplay then it’s still something at least. The campaign is around 4-5 hours since I don’t think you’ll be able to crack all of the puzzles immediately. I certainly wasn’t able to at least. You can typically find this game for really cheap nowadays so that’s something to keep in mind.

Overall, Casper: Spirit Dimensions ended better than it began. I do think the gameplay was rather ambitious. It may not have been super polished and little things here and there like the collecting mechanics not being explained very well or the portals erasing progress can be pretty annoying but the core gameplay itself was good. Kibosh definitely made for a decent villain and I dare say that he may have been Casper’s deadliest opponent. It’s hard to top that guy at least. Make sure you stick around for the ending as well. It was definitely leading up to a sequel but I suppose we never quite got that one. Too bad, it could have been really interesting if you ask me. If you see this in stores I’d recommend checking it out if you want to play a nostalgic platformer.