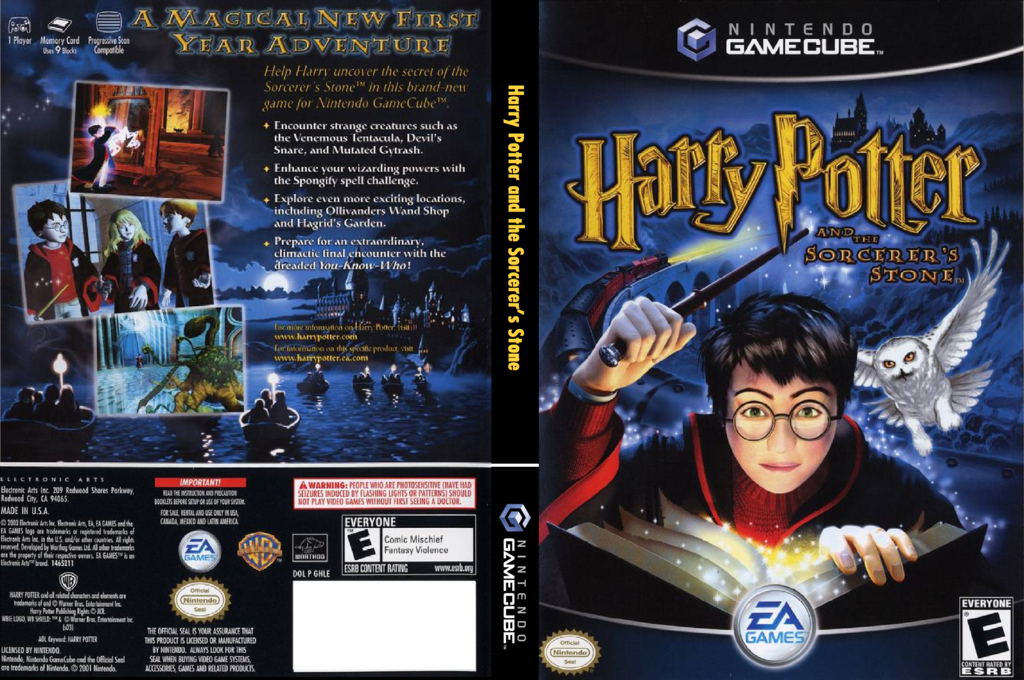 At long last I have begun the Harry Potter marathon. It’s definitely a pretty legendary series that’s for sure. The games are out of print though so getting a hand on this one is pretty difficult. It ended up costing 100 but I was able to get it in a bundle pack with two other Harry Potter games so the price didn’t feel all that crazy. Usually you’re likely going to be spending a whole lot more than that on it. It’s a pretty fun game, fairly standard I’d say but one that does the job.

The game starts with Harry being invited into Hogwarts. It’s a school for magicians where he will be able to perfect his craft. He quickly becomes friends with Ron and Hermione which is handy since being on your own here is pretty tough to say the least. One of the Professors seems pretty shady. His name is Snape and he just looks like a villain. Mix that in with his teaching the dark arts and the heroes are all wary of him. When the kids learn that the Philosopher’s Stone is around they realize that they’re going to need to find and secure it before the villains can make a move. After all, Voldemort is supposed to be dead but is that really the case?

From a gameplay perspective Harry Potter isn’t going for anything new. It’s a classic 3D Platformer where you navigate through the levels and deal with the occasional boss. You can’t jump but your character will automatically jump if you are next to a gap. You learn 5 different spells although awkwardly the game only lets you equip 3 so prepare to have to open up the menu a lot. The spells are Light, Attack, Fire, Cut, Open, and Spring. Use them wisely in order to get through the obstacles. The game is typically pretty clear about what you have to do so no worries there. The first plant boss took me a little time to figure out how to beat him but since there aren’t a ton of attack options it’s not like you have to experiment too often. They also re-use the plant boss two more times so it’ll be easy to take him out after round 1.

Aside from two times where you have to go and find some potion ingredients which involves backtracking the game is very linear. You go accomplish your goals for the day and then you have the option to end the day or go collect some cards. If you want to end the day you can do so immediately from the start menu as opposed to having to go back to your room each time. I definitely appreciated that. The fact that you have the option to explore is nice too. There are over 100 trading cards in the game so grabbing those will probably take a while. You can also collect little beans to buy things with. You can only carry 50 though so you get the item box filled really quick. In a way it’s nice to stay filled up though as otherwise Harry always makes a lot of noise when going for the beans. You’d think he would take the whole thing with a little more stride.

The game’s length isn’t bad. You should have it beat in around 5-6 hours and then with the replay value of getting the cards it should take a few extra hours. The hub world is surprisingly huge so finding the collectibles would be quite the journey since there is no way to track where the ones you haven’t grabbed yet are. Still, the game isn’t quite long enough to drop $100 on so I would keep that in mind if it’s still out of print. In that case it’s only worth that amount if you are an incredibly large Harry Potter fan.

The graphics look pretty nice. All of the characters have the huge eyes approach so they’re almost like bobble heads at times. There are a ton of cutscenes and the whole thing feels like it has a good amount of effort to it. The soundtrack is more on the forgettable side though. I don’t think there are any tunes here that will make you think twice about the whole thing. So all in all the game works pretty well on a technical level. It’s just a pretty quick platformer to spend a few hours on and have a good time. We even have a few broom levels where you get to zoom around the room. Honestly I would have liked more of those levels since they were a fun change of pace. Finally there are 2 stealth levels but they seemed kind of broken. I just ended up cheesing them by running past the guards and opening the door even if I was seen. It was still a fun little minigame though.

The only thing I would say against the game is that the lock on feature isn’t very good. At times your lock will just go away so you end up shooting at nothing. Changing targets is also difficult. I feel like this could have used a little polish. At times it makes some parts of the game a little more difficult than they should be just because you can’t get the game to lock on to the person you want to attack. On the whole though I would say this isn’t a huge deal and it’s something you can certainly adapt to and quickly overturn. It’s big enough where I thought it was worth mentioning though.

Overall, Harry Potter and the Sorcerer’s Stone is a pretty fun initial journey into the verse. It does a good job of capturing the story and tone of the original movie. I look forward to seeing the characters progress in the sequels. I’ll be starting the second game shortly. So if you find this game at a reasonable price then I would definitely recommend checking it out. If it’s still a little overpriced then you’re good with just waiting a little while or even skipping it. You won’t be missing a whole lot. The game’s not trying to do anything special. It’s just a pretty good game, no more and no less.