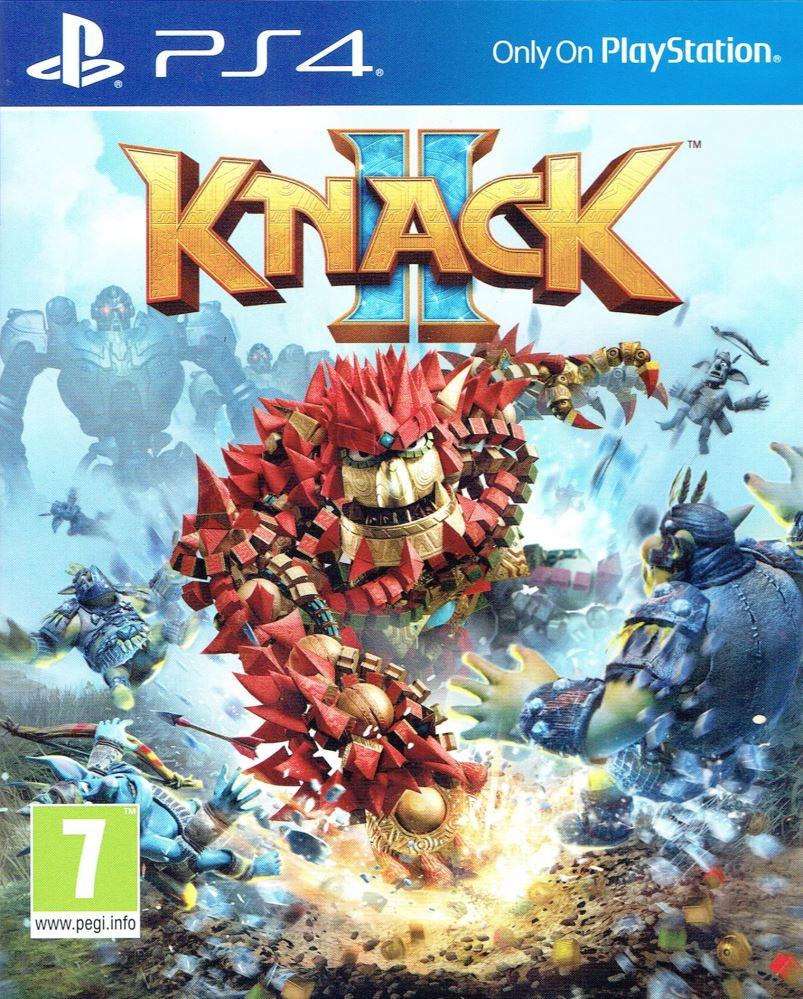 It’s been a very long time since I played the original Knack. It was a fun game but not exactly anything to write home about. Well, it was only a matter of time before I would eventually head out to get the sequel. Knack II certainly improves upon the first one. Elements like the gameplay are quite similar but more streamlined. Graphically the game has improved as well and I would say that the story is better as well. With all areas of the game improving, it’s no surprise that the sequel manages to hold your attention the whole time.

The game starts off with Knack and Lucas being under attack by a bunch of robots. Knack manages to take most of them down but just when he is about to be destroyed we cut away to a few months earlier. Knack and Lucas were having fun exploring with Uncle Ryder when all of a sudden a lot of robots start to come back to life. These robots used to belong to the goblins back during the Crystal Wars but for some reason they are active again. Lucas will need to team up with some scientists as well as the government leader Xander in order to stop these guys. One of the head monks is a girl named Aya and she is always ready to help Lucas and friends. They’ve got a pretty good system set up here but will they really be able to conquer an entire army? One thing’s for sure, they’re going to need Knack to bring his A game.

The plot is fairly basic of course with robots ready to take over the planet. You can probably predict all of the twists and turns that will commence fairly early on into the game. One thing the title does effectively though is the various time skips that happen during the game. The characters will be in a jam one minute and the next 4 months have passed. The villain definitely got a whole lot done in that time so the heroes really cut it close. I wasn’t able to buy into the origin of the Crystal Wars though. I’m not really bale to buy that a bunch of humans with swords were able to take on an army of giant robots. That’s just hard to buy.

It’s a fairly minor plot point though I suppose. Some of the characters here do not look great this time around though. First lets take the main scientist Vargas. For some reason here he just does not trust Lucas in the slightest and it ends up forming quite the rift between them. You get the feeling that if he had been at least a little supportive then things would have played out differently. I don’t really get why everyone was telling Lucas he needed to get serious and accusing him of being distracted by Ava. The game never showed for a moment that he wasn’t serious.

I wouldn’t say Lucas looked great either though. He definitely gets very emotional during the game and makes some questionable decisions like deciding to hand the orb away. He’s also very slow on the uptake during someone’s speech later on. It has to be completely spelled out for him to understand what’s happening. That’s definitely not the ideal hero that you’ll have been looking for. Knack is okay but he still doesn’t have a whole lot of character. He follows orders and is a nice guy. That’s about it. I like his confidence but you just get the feeling that he is as unoriginal as they come. If he had more character moments that would be good.

Ava is a solid new character at least although she definitely makes the wrong decisions a whole lot. She ends up seeming a bit naïve with how she didn’t realize what was going on until the very end. I dare that during one of the multi month time skips there would have been a lot of red flags everywhere. Meanwhile Xander’s okay if not just a bit generic. He doesn’t have any of the witty dialogue you need his character to have in order to stand out so that was unfortunate. He’s a big improvement over the goblins from the first game though.

As for the gameplay, Knack II is your classic 3D action game. You can rush in and mess enemies up with hand to hand combat as well as your other tools. During the course of the game you learn new moves like a boomerang, the ability to pull opponents to you, and things like that. Once you unlock the boomerang I recommend using it as often as possible. It’s definitely got to be the most useful ability in the game and it’ll never steer you wrong. There’s actually a decent amount of strategy to this combat style as you can’t just run in trying to punch everyone. That’ll end up with you being defeated very quickly most times. Learn to use your boosts to dodge a lot and you’ll be fine. There are also upgrades you can unlock to strengthen Knack using EXP from enemies and you also have a lot of quick time events to master as well. There’s just a good amount of depth to the title so you’ll be in good shape for taking on the enemies. Make sure you always stop to open the crates for bolts since improving your size is incredibly handy and makes all of the combat moments a lot easier.

Unsurprisingly the graphics in the game are pretty good. This definitely looks like a modern game with a lot of great visuals throughout. Whether it’s the characters themselves or some backdrops Knack II does not pull any punches here. The soundtrack isn’t as impressive though. None of the tunes ended up sticking out. It’s unfortunate because an action game like this should have a lot of great rock themes or something but this title avoided those. Well, that’s something it can shoot for in the third game.

The main story took me a little under 9 hours. For replay value I suppose you can play through hard mode in order to get the rest of the collectibles as well as aim for the Platinum Trophy. That should take some time to be sure. I saw you also get to unlock Colosseum mode at the end so that should be a fun mode. Sounds like it would have a lot of battles at the very least. Right now the game tends to go for cheap so now’s a great time to take the plunge and go all in.

Overall, Knack II is a pretty fun game. I would definitely recommend it if you’re looking for a solid action game to play through. It’s definitely not going to win any big awards for its character or story but the gameplay is strong which is definitely important. You won’t grow bored during the game and the trial and error tends to be enjoyable since each section is quick so you never have to replay a whole lot. I’d be game for a third Knack game coming out someday although it looks like the odds of that happening are not great.