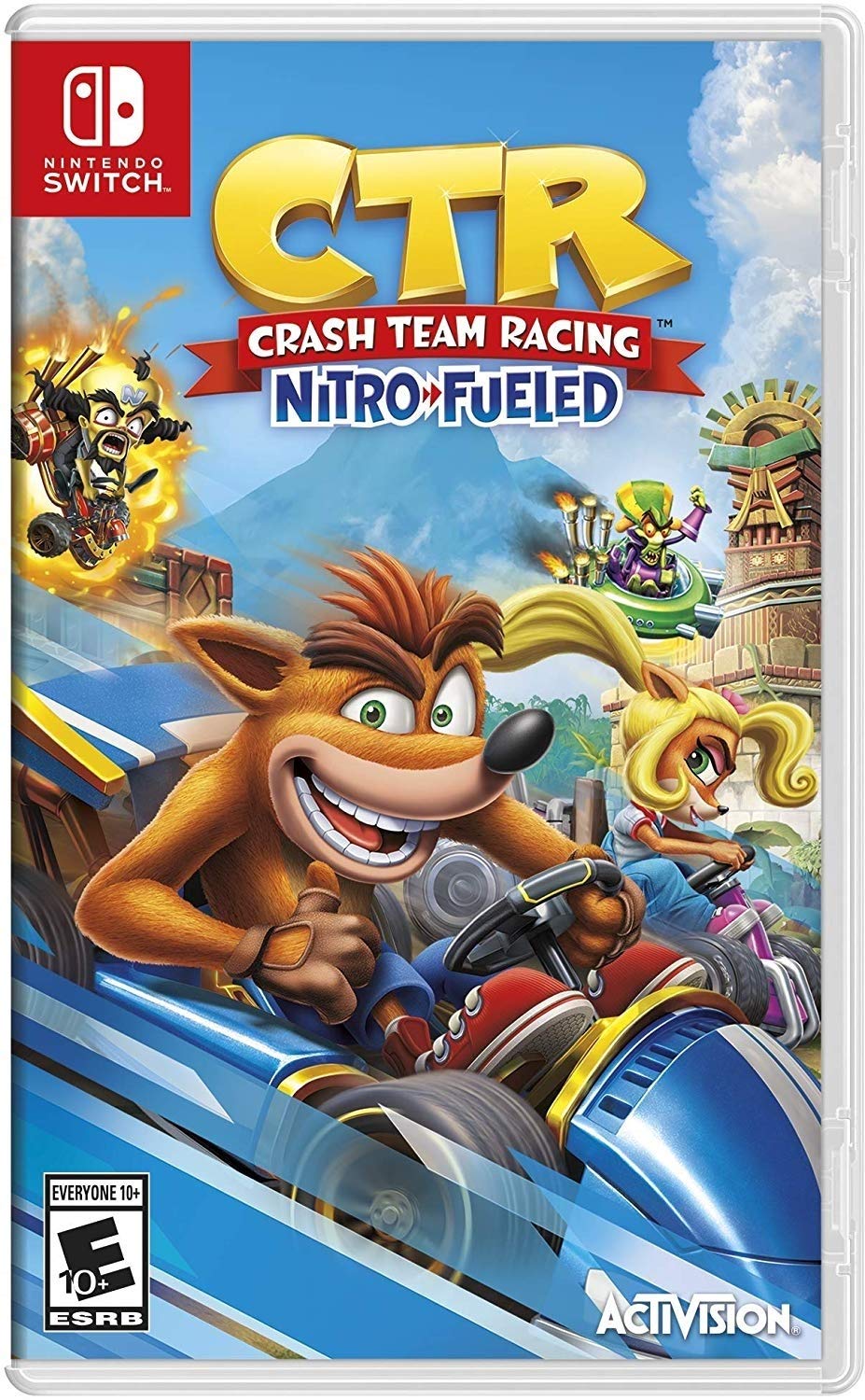 I have to give Nintendo props for finally adding some full free games to their menu. Now, it’s not quite the same as with Sony or Microsoft where they give you a slew of games that stay completely free every month. This one was time limited so it was only free for a week or so but it’s nice to have this. It also adds a level of urgency since you have to try to clear the game in that time. It was awful close but I did manage to clear this game right at the very end of the trial period so I have to admit that I felt pretty clutch at that point. Crash Team Racing is a lot more difficult than you would expect so you definitely don’t want to underestimate it.

The game’s story involves an alien showing up on the planet and deciding that he will destroy everything. He will give the heroes a chance though. they must all compete in a bunch of races and once we have determined who the strongest racer in the world is, then the villain will fight that guy. It’s a fairly basic story that’s just so we can have some context for the races. You can tell that it wasn’t exactly top priority to have a big involved story or anything like that. I do appreciate the game giving us several cutscenes though because it does make the story feel more authentic. Each world has 4-5 races that you have to conquer before fighting the boss of the world.

The gameplay is that of a 3D racer and of course the objective is to get to the finish line first. As you drive through the maps there are items you can grab which will help you in this endeavor. Most of the items you should recognize from Mario Kart like the Paratroopa, Green Shell, etc. They are all slightly altered of course so it’s not literally the same weapons but they have the same effects. The main difference here that makes the game more difficult than your average racer is how the boost system works. In order to attain your boost you have to intentionally drift while on the map. Keep on drifting in order to boost as well as increase your base speed. So for example, if you are just driving straight in a normal way then you will be moving fairly slow. If you keep on drifting over and over as you race then your overall speed will be greatly improved. So the more you master drifting the better.

In fact, winning the game would be 100% impossible based on my experience without drifting. Even with it some races would take me over 20 attempts to conquer. I can only imagine what the game would be like on hard mode. I was impressed with the difficulty setting although at the same time it does feel like the A.I. tends to cheat at times as their cars are naturally faster. I do understand programming a racing game like this is no small feat though as you would have to either have the A.I. be too weak or too strong. I suspect it’s not a super adaptive learning process here as that would be a lot of work for a racing title.

The graphics look very good. It’s definitely a very modern game with all the trimmings. The character designs are on point and the level backdrops are all different and have a striking look to them. We also have a hub world which is a nice idea although it could have been handled a little better. You have to manually drive to each world and there are no real big checkpoints so expect a good amount of driving between worlds. It’s a super small thing to note but one of those times where a fast teleport system would have been a good quality of life upgrade.

As for the soundtrack, that part is fairly forgettable. All of the tunes are super standard to the point where they could pretty much be free domain music in a racing game. Part of this is due to the fact that most racing games do have good soundtracks though so the bar is already high. To be standard for a racing game isn’t a bad thing but I do feel like they could have added an extra tune or two that you could really sink your teeth into. Now that would have been really good.

There’s a good amount of replay value although it could definitely be in an annoying way. There are tons of characters to unlock here. The way to buy them is to use your coins at the pit shop but only a few characters are displayed a day. It’s not like the classic shops where everyone is always there to be purchased. So you may have the coins but it could take a while to get everyone. I am impressed with the scale of content though. It may not be easy to get them but there is so much to buy. I’m not even familiar with half of the Crash characters in this game, they just squeezed everyone in here. Between doing all of that and trying to unlock the secret ending there is a whole lot to keep on doing here. Naturally the online multiplayer is a factor as well.

Ultimately what holds the game back when compared to the other big racing games like Mario Kart and the Sonic ones is that the gameplay being so heavily reliant on the constant boosting can hurt. You don’t want to always have to be turning at every moment and that’s what this mechanic forces you to do. It’s a lot less peaceful than the game could be and between that with all of the items it feels like you aren’t getting to actually “race” for a good chunk of each level. This is still a good game, but I could have done without the boost mechanic.

Overall, it’s clear that a good amount of effort was put into this game. It’s nice that we have a real story and the amount of characters in the game is crazy. The gameplay may not have been my favorite but it’s still a racing title and the kind of game which will be amplified when you play with others. If you’re looking for a good racing game to check out then I would recommend buying Crash. It’s not exactly my top recommendation in the genre though so if you want an even grander title then I would recommend Mario Kart. Of course…I have yet to buy the latest game in that series myself but it’s on the list.