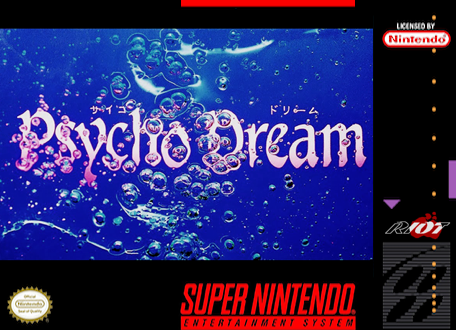 Next up in the review ranks is a game that throws in some good sci-fi angles at us. Psycho Dream is fairly short but has good gameplay and a solid story. Of course with a game like this it is quite interpretive so to an extent you get to decide what the plot is. If you were to look up the game’s plot online I’m sure you could come away with a definitive answer but purely from the game’s context a girl has been kidnapped and now you need to find her. The main character has a pretty cool suit. He looks kind of like a ninja and with the way he’s running around that may not really be on base. Either way this made for a great setup to start the game.

This rescue won’t be easy though. For starters there are a bunch of giant monsters running around. The whole game plays out like a dream with each world getting weirder than the last. It’s nice because the game is able to go all out with the graphics. The level designs are very creative. You get to visit a whole assortment of places and the bosses all have fun designs as well. You definitely won’t get lost or anything while you run around the levels. It’s all pretty straight forward. As for the gameplay, it’s in 2D. You have various weapons at your disposal such as a blade or even laser blasts. Throughout the levels you are able to change and upgrade your weapons to fit the situation.

This is one game where I would say that it’s not always good to power up though. The best weapon you can get is one where you can use your sword and then your energy blasts nonstop. Unfortunately the middle power ups just have one laser which doesn’t cover nearly the area that the blade can. Most times you are better off just sticking with the blade. It doesn’t deal the most damage and it isn’t the fastest weapon but it’s definitely one that you ca count on to get you some nice wins. It has a good reach for every boss you may end up coming across so I’d say it’s the most consistent weapon.

There’s certainly room for a sequel with how suddenly the game ends. Who knows, maybe there is already a sequel out there somewhere since this game is so old. At the very least from the new SNES games added to the collection this would definitely have to be one of the higher recommendations. You can beat it in around an hour or so and there is no replay value so you really just need to have fun on the opening playthrough and then you’ll be set. I don’t see why you wouldn’t though, all of the fundamentals are intact.

The soundtrack isn’t very memorable but I want to say it was decent. I would have probably given it some more rock tunes or fast paced techno to fit in with the game’s layout. Imagine jumping across the platforms in the final boss fight while you’re getting really intense battle music. I think that would have worked out rather well if you ask me. Definitely a good way to amp up the game but it’s a solid all around title either way. It’s an hour where you should have a blast. The game is reasonably difficult. It’s not as tough as Doomsday Warrior but you still can’t go in expecting to walk all over the game or you will definitely be in for a surprise there.

Overall, Psycho Dream goes all out with making sure this is a very original video game experience. It does a great job of making itself standout among the crowd. There just weren’t a lot of games in this era that looked quite like this one. The only thing I’d say against the game is that I don’t get why the laser is so weak. I feel like all power ups should be stronger than the original weapon. It feels like a trap if you get a power up because then you may be stuck fighting an enemy who is too powerful when it should be the opposite. It’s just a little odd having to recommend you keep your initial weapon but that is the case here.