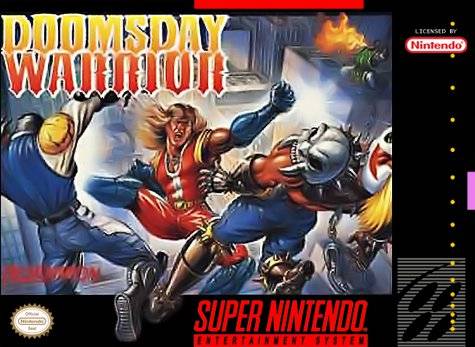 The SNES certainly had quite a few fighting games back in the day. Doomsday Warrior is one of those titles that you probably won’t remember for very long because it doesn’t do a whole lot to stand out. I’ll give it props for having a real story though so you at least have a little something aside from the actual combat. The game is also a lot more difficult than you would first suspect as well. It’ll take a lot of fundamentals to complete the game. Still, it’s a good game in the end and worth playing through.

You get to choose from several different characters. I picked the one who looked the most like he would be the lead. Then like in a Mega Man game you choose who you will want to fight. After you beat the main 8 enemies that’s where things get interesting. You get to fight a dark version of yourself as well as two cosmic beings. Then you face off with the final boss who suspiciously looks like he may be your father. That leads to a solid epilogue. So the story is rather good. It’s basic of course and there aren’t a whole lot of cutscenes but I don’t expect you would have really been thinking it would be more than that. For its time and given the genre I was pretty satisfied with this. The climax actually felt like a real one you could see in an RPG.

The gameplay is a bit of a weak link for the game though and that’s not good when you’re a fighting game. I would say the main issue is just that it is not very inspired. The attacks are all rather cookie cutter and plain. There isn’t anything that really helps this game stand out. Part of the difficulty is also in the fact that the attacks have a very short range and the computer is always able to jump in and land the right blow at the right time. Short of stopping time and freezing them in each encounter you won’t be able to do a whole lot. Some characters at least have one basic special move though which I appreciate. It at least spices things up a little bit. Maybe making the gameplay a little faster would have helped too. At the end of the day all I can say is that it didn’t click as well as you would expect.

I still enjoyed the style but as it felt weaker that is the main thing that kept this game from getting the solid 7. Additionally I wouldn’t say the replay value is incredibly high. You can beat the game as the rest of the characters I suppose which should be pretty fun in itself but I’m not sure if that would be quite enough to push it into the next tier. Most likely after you complete the game with one character you will be ready to call it a day and move onto the next game.

As for the graphics, those are fairly decent. The illustrations at the end of the game have good art which is nice. In the actual gameplay there isn’t a ton of detail but what we have there looks good. The soundtrack is a little forgettable but it’s not bad. That’s really what describes most of the game. It’s not bad and it is good in the end but it just doesn’t stick out. Only being good when there are so many other fighting games to try out is a pretty dangerous spot to be in. You really need to stick out at this point.

Overall, Doomsday Warrior is a good fighting game, but one that won’t last you a whole lot of time. The character roster is fairly small and there isn’t a whole lot of reason to go back and replay the game more than once. I will say that the characters had fun designs though. One of them reminded me of Chaos Zero from Sonic. These guys all feel rather different which is especially important if the game only has a handful of characters to choose from. If you have the Switch Online service then I would recommend checking this game out. If you don’t have it then I would say that it’s probably time to keep moving. This isn’t the kind of game you would buy a whole service for. I do think there’s a lot of potential here for a remake or a film someday. The core plot seems interesting and any action plot that involves robots, aliens, and monsters has to have potential.