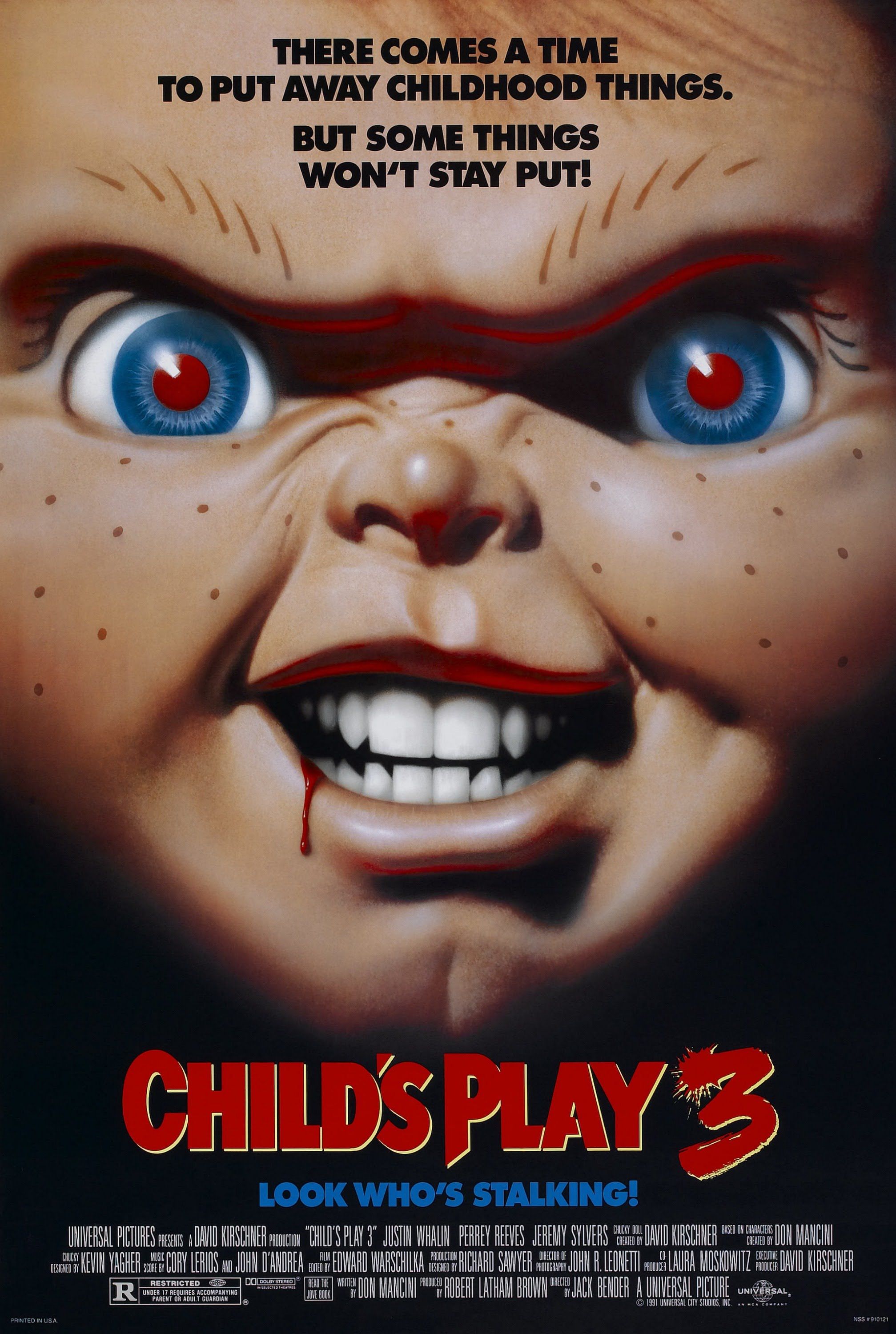 I gotta say, I was not expecting corporate to return here so that was actually pretty impressive. Once again, they have the most interesting scenes here as the board discusses what to do with the whole Chucky incident. This is the kind of story arc that could really make for an amazing movie. I’d be really interested to see how this plays out. Unfortunately, this only makes up the first few scenes and then they don’t appear again but it’s a good way to set things up. Beyond that, this is more of the same from the second film.

Chucky has returned and once again he wants to take Andy down. He tracks the kid down to a military school. Andy is now 16 so he’s a lot older than he used to be but is still having a tough time of it thanks to how Chucky ruined his life. This school is also quite extreme to the point where the leader of the military squad is an open bully that nobody even tries to stop. Andy gets harassed on a daily basis but at least he’s safe right? His world is about to get rocked one more time.

At this point you definitely have to feel bad for Andy. He’s not only lost his home and his family at this point but now he’s in a school that is shown to be quite awful and Chucky still finds him. If he fights back then people think he’s insane and if he doesn’t then more people end up dying. It would seem that no matter what he does, things end up going sideways regardless. At the end of the day Andy does his best to help out Tyler and do the right thing so this may be his best appearance. He even fought back when Shelton landed a cheap shot on him. The best part is the fact that Andy was actually beating Chucky up throughout the film but got interrupted before he could finish the villain off. Andy wasn’t playing here.

As for Chucky, he may get a lot of wins in the film as he bumps people off but in some ways I would say it was probably his weakest appearance from the three films. If you think about it, he would only attack people when he had an overwhelming advantage and was quick to pretend he was a doll again otherwise. His spell to change bodies also seems to never really work so at this point you feel like he needs to try something else or lock someone in a building before trying it so he doesn’t get interrupted.

As for Whitehurst, he may be the worst character in the film. He completely ignores the fact that someone got murdered right in front of him and then decides not to help to prevent other murders. He allows other people to get left on the spot as a result and doesn’t actually make a move until the very end of the film. That’s not a good way for a character to get into my good graces. He just wouldn’t step up when he was needed and that’s a shame.

As for Tyler, he’s a kid so you can cut him a little more slack with how Chucky was tricking him the whole time. It can actually make sense in some respects since you wouldn’t expect a toy to be evil like that. He was quick with a knife too which was important. Then you’ve got DeSilva who is the main heroine here. She’s pretty good with a gun even if that had no real payoff in the film. Where she really shines is in how she defies the bullies more than the others. She talks back to Shelton and his cronies and is also able to do pushups with ease. As a result nobody can intimidate her so she makes for a strong ally.

Shelton and his crew are definitely quite exaggerated though. I haven’t seen bullies get this much free reign in quite a while. After a while you’ll start to roll your eyes at what these guys are doing. You also know that things probably won’t end well for the main one since they never do in these films. Unfortunately as a result this film has to have the worst script and writing yet. Each character has a sailor’s mouth here including Chucky as they hurl insults at each other. It’s not surprising that the bullies would be spreading this around but why has nobody stopped them yet? This military school is definitely portrayed as being quite corrupt.

As you would expect the film is quite violent as well. The characters all die in rather gruesome ways for getting in Chucky’s way. Just when you think someone’s going to live, you remember that you’re watching a Chucky film and get back to your seat. The film definitely isn’t hiding the fact that these characters are going to be absolutely crushed because each scene lets you know that right away. The barber had been an interesting character but he had death flags from the start. It would have been interesting if he had actually been able to give Chucky a haircut but the odds of that were absolutely astronomical. Chucky just wasn’t going to go for any of this.

Overall, Child’s Play 3 is about on the same level as the second film. If I absolutely had to pick one film over the other….I would probably say this one is a tad better. It’s very close though to be sure. Both are almost identical films as they go for a lot of shock value throughout as each character is murdered in a gruesome way and Chucky keeps surviving his own death to come back for another round. His stamina and durability is absolutely bonkers. At this point he’s seemingly died almost 10 times so that’s quite the feat. We’ll see how he does in the next film and if that one can manage to top this one. I certainly wouldn’t rule it out. I’m ready for a new setting and to see how the next group handles Chucky. Surely more people would be open to the idea of an evil doll or at least banning the good guy brand after a third incident right?