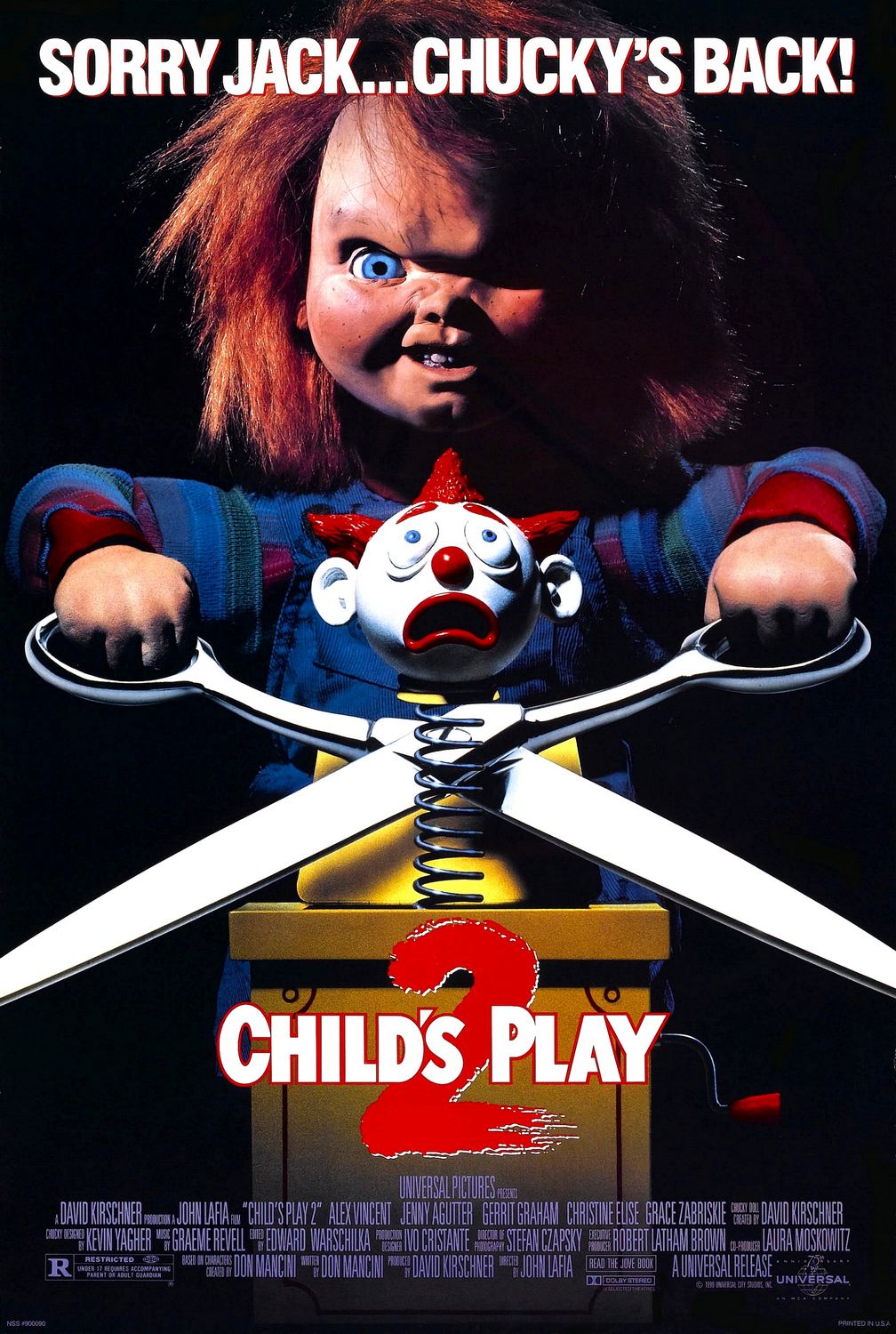 Now this is more like what I expected the first Child’s Play film to be like. Unfortunately that is not a good thing though. This film decides to get a lot more violent and dark as it transitions from a classic horror film to more of a slasher. Chucky isn’t playing anymore and he’s just going to go around and murder everybody. It definitely doubles down compared to the first film though so in a way this lets Chucky take more names but a film relying on shock value and over the top violence will ultimately not succeed.

The movie starts with Andy having to move in with his new foster parents. Unfortunately his mother is deemed insane due to the events of the first film which is actually a rather dark ending for her since she is no longer able to protect Andy herself. Everyone figures Andy is just crazy but his new parents are determined to help him out although Phil is rather wary the whole time while Joanne thinks this can work. They are also raising a teenage girl named Kyle who is in her rebellious phase in part because she is always being taken from foster home to foster home so she doesn’t want to drop her guard. What they don’t know is that Chucky has returned from the grave thanks to the company patching him back together. He is now ready to take some names as he dominates the cast.

I have to say the first scenes with the company is probably the most interesting part of the movie though. We see how corporate is dealing with this. As expected, they want to bury the whole Chucky incident entirely. They don’t believe in a living doll or anything like that but it could hurt sales. The CEO is introduced as a very tough character who won’t be putting up with any nonsense. Getting in his way at all is definitely incredibly risky. That said, these guys never stood a chance against Chucky either way. Chucky is able to easily overpower everyone.

See, here’s the thing about Chucky. He’s technically not all that strong. He seems to have the arm strength of a man who’s always injured. He’s certainly not as strong as a grown man given how people overpower him at times but he’s still reasonably tough. The thing is, he doesn’t have much weight though. He weighs the same as an average doll so people are still able to throw him around with ease and that’s the guy’s big weakness. So you’ll notice that in most of his scenes the guy has to rely on getting people with sneak attacks or where they are unaware.

The most embarrassing death for a character would have to be the CEO’s partner. That guy just wasn’t ready for the water gun but at that point he should have quickly ran or attacked since he knew it was fake. Instead he did not make a move until it was too late. It’s a rather vicious scene for the guy but you feel like he could have made some better options to escape. I guess he was in panic mode though which is fairly realistic. Chucky keeps on destroying people in a variety of ways as the film goes on. Each method usually gets more violent than the last so get ready for that.

As for the characters, well Andy is okay I guess. He definitely hasn’t forgotten what happened but there’s just not much he can do since he’s a kid. Either way nobody believes him and it’s not like he is old enough to make his own decisions so he is constantly put in rather dangerous circumstances like when he got tied to the bed. That was definitely a rather close shave for him. Then you have Kyle who does her best to help out near the end. Her character arc is a fairly good one since she was skeptical like the rest of the characters but once she got some concrete proof she was ready to step in.

In these films I don’t blame the characters for being super skeptical because the idea of a talking doll is rather bonkers but it’s good that she moved at the end when needed. The climax certainly goes all out here as it seems like the characters have to keep on murdering Chucky over and over again until he goes down. It’s definitely foreshadowing for the third film since you already know that this guy doesn’t go down easy. So it was a pretty intense climax there but you just know the technician was only there to be bumped off. The instant he appears you know what is going to go down.

Overall, Child’s Play 2 is definitely striving to be a lot more intense than the first film. I dare say that the violence surpasses the original one when it’s only halfway in or something like that. If you’re big on horror films I would say you’re definitely better off with the first one. This one doesn’t exactly go for anything particularly clever or noteworthy. The whole film is really just an excuse to see Chucky murder everyone. Every scene practically yells out who the next victim will be. Really what the film should have done is have more of the corporate scenes. I’m telling you, that’s where the hype part of the story would have been. I’d love to see a film about corporate trying to do damage control on this. You don’t even need Chucky to appear in theory as it’s more of a social film dealing with the fallout of a horror title. Now that’s something that’s never been done before and has a whole ton of potential.