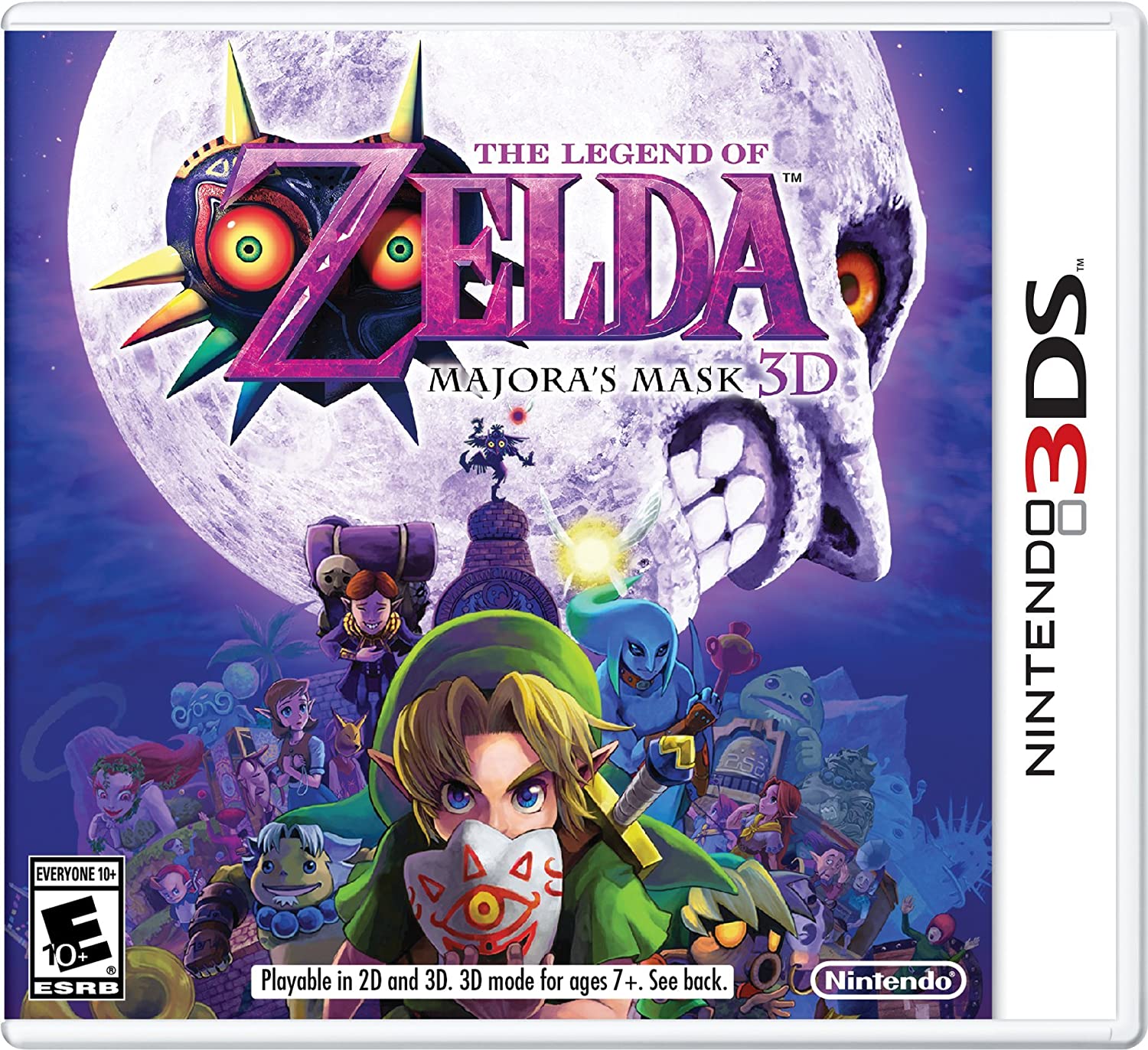 As I entered the final dungeon, I started writing this review back in April 2015. Little did I know that I would be stuck in that same dungeon for the next 6 years. It’s pretty fun to see how I may have sounded 6 years ago and why waste the writing right? So I’ve kept my old review in italics and will throw in some additions at the very end of this review for some modern thoughts
Majora’s Mask is one of the few Legend of Zelda games that is a direct sequel. It takes place after Ocarina of Time. Despite this it seems to be forgotten or pushed to the wayside more than the other big titles. Part of the reason is that it is a sequel so it could not be thought of as the next core Zelda game. That being said, it does have a strong fan following and it is talked about to this day.

Link’s adventure begins suddenly as he is confronted by a mysterious kid. He calls himself Skull Kid and his powers are incredible. He takes Epona away and transforms Link into a scrub. Link will have to stop strong guardians in different parts of the world if he is to stop the moon from crashing. He only has 3 days to do this, but let’s not forget that he is the hero of time! Time has never been a problem for Link before and it won’t be one now.

Graphically, the game holds up pretty well. You are bound to feel nostalgic if you played Ocarina of Time. Of course, the area is not quite as happy as it used to be so things are also different. I am also sure that you are familiar with the many fan theories for this game. There are loads and loads of them to be found and the developers likely had this in mind when they were making the game. It is certainly a lot darker than the average Legend of Zelda game.

The sad fact for the resistance is that Link is simply too late this time. Most of the heroes are already dead and Link simply pretends to be them so that he can inherit their powers and keep up morale. It is certainly scary just how many casualties there were in this game and the whole atmosphere can seem depressing at times. It is as if all hope is lost.

The soundtrack is a little limited, but it is still good. The danger theme holds up well and that’s the main one that I continue to remember. It is catchy and returns again and again as you play the game.

Unfortunately, I do think that this game is a big step down from the average Zelda game. It certainly loses to all of the big titles. There are two main reasons for this. The first of which is the new 3 day system. As it is, the 3DS version added more save features to make this a little less tedious, but the system still hurts the game. It is a unique gimmick as Pikmin is the only other game that I can think of which uses it. That being said, it simply acts to delay you. If you are in a dungeon when the 3 days are up…then too bad. You can slow down time to make it more manageable, but it is still an issue which the adventure could do without.

What acts as the ultimate 1-2 punch here is the large amount of puzzles. Legend of Zelda has always had this element to separate it from the traditional hack and slash games. In the past, it has worked really well like with Wind Waker and Skyward Sword. (Which was still a very fun game) Unfortunately, Majora’s Mask is unable to find a good mix of puzzle and action. It is skewed heavily in favor of puzzles. Towards the end of the game, we finally get more action but for the first 70-80% of the game the action is minimal.

Puzzles can be fun if handled right. You always felt a sense of accomplishment when you solved one in Wind Waker. Of course, there was no timer there. Even without a timer, Majora’s Mask’s quests are not nearly as fun as they could have been. One big reason is the actual gameplay.

The gameplay is your average 3D title. You can’t jump, but you have a lot of gadgets and you traverse through the unknown. It works very well for the action segments. The puzzles are the dicey part. Some temples like the water one require you to walk a great distance between areas multiple times. Link isn’t very fast so it makes the experience that much worse when you have to head back to a place where you have already been. It is not as if Link is abnormally slow, but for some reason, if just feels like it can take forever to get to where you want to go at times.

Many of the puzzles simply start as well and you just have to wander around until you find out what to do. It is difficult, but in more of an artificial way. I love a nice challenge, but not because I am unsure of what to do. Look at Capcom vs SNK’s God Rugal/Regal boss or the Subspace Emissary on intense in Super Smash. Those can be very difficult, but you do know what to do from the start. It will test your gaming ability, but in a fun way.

After all, you are playing to have a good time and that is one area where Majora’s Mask is lacking. It simply isn’t fun at times, which certainly hurts the score. It takes away the replay value factor and makes this title dangerously close to not being a good game. All right, that’s enough for negatives, let’s close out with what the game did right.

While the gameplay doesn’t suit the puzzles, it is still a lot of fun for the combat. Striking with a sword or using one of your gadgets ensures that you are in for a very flexible boss battle. The boss fights are also fun. They can be direct like in traditional 3D fighters, but often times they are unique in a good way. The ocean boss fight with the large fish was certainly fun. A lot of the boss designs are certainly good. It is also fun to see the ReDeads/Undead appear once more to strike fear into the hearts of many. They are still one of the most intense minions out there and facing them is always a lot of fun.

Link is naturally about as heroic as you would expect. He tackles the enemies with complete confidence in his abilities and never loses sight of his goals. Naturally, this game came out a long time ago so it can’t make him look quite as epic as a modern title would, but Link tries his best and that’s the important part. He is knocked down many times, but he always makes sure to get back up.

I am definitely not a fan of Skull Kid though. He is lacking in willpower from the start and he just isn’t my kind of villain. His design certainly isn’t bad though. Majora is the real threat and makes for a really epic villain. Even before playing the game you’ll have seen this guy’s crazy super form designs since it’s so iconic. The developers really gave it their all to ensure that Majora would spook the audience as the fight began. Certainly an epic way to end the game.

Finally, Majora’s Mask is very interesting. It is like looking at a twisted alternate reality if Link had not saved the world from Ganondorf. Which, it is still surprising that Ganon completely missed out on this title. That is certainly rare for a LoZ game.

Overall, Majora’s Mask 3D will continue to be known as the deepest Zelda game. It has the mechanics of Ocarina of Time, but ends up losing out due to the extreme number of puzzles as well as the two gimmicks. Those being the masks and the 3 Day system. More action and play time as Link would have done much to improve this title. Either way, the graphics and soundtrack hold up well. The iconic “You’ve met with a terrible fate haven’t you?” line holds up very well to this day. It makes the merchant appear to be sympathetic, sarcastic, or gleeful depending on how you read it. I wouldn’t trust him though since it seems like he destroyed Mario…heh heh. If you are looking for a nice challenge for your puzzle skills or are a big Legend of Zelda fan, I recommend checking this one out. It is also a good bet if you just want to analyze the game and create some theories of your own about it. If not, Skyward Sword is probably a better bet.

My views on the game haven’t really changed much since I originally played the title. I would still say this is certainly the weakest of the 3DS titles. It really boils down to the 3 day system more than anything else. It adds a layer of pressure to the puzzles to be sure, but in a way where you dread them rather than enjoy them. After playing through the stone temple dozens and dozens of times, you start wanting some qualify of life updates like not having to solve the room’s puzzle every time you have to go back and forth. Being able to equip more items at once so you don’t have to keep on substituting them out would be ideal as well.

I didn’t get to play as Fierce Deity Link so that was too bad. I guess maybe that’s more of a bonus thing if you get all of the masks or something like that. At least you definitely can’t say that the game is short though. It took me over 50 hours to conquer and even then there is a lot of extra content to try and grab like the masks and collectibles. Finding everything in this world is definitely not for the faint of heart and not something that can be sped through. You’ll really want to master these temples.

Overall, if you really enjoy puzzles and like the idea of the day system resetting your temple progress every 3 days then it’s probably about time you picked this one up. Otherwise I would say to just buy Ocarina of Time or Skyward Sword instead if you want more of a definitive Link experience. Both of those 2 are what I would call the definitive title in the franchise because they capture everything you would expect to see in a Link title. If we ever get a Majora’s Mask sequel, I’m confident it would work out a lot better since the 3 day system should be gone…at least in theory.