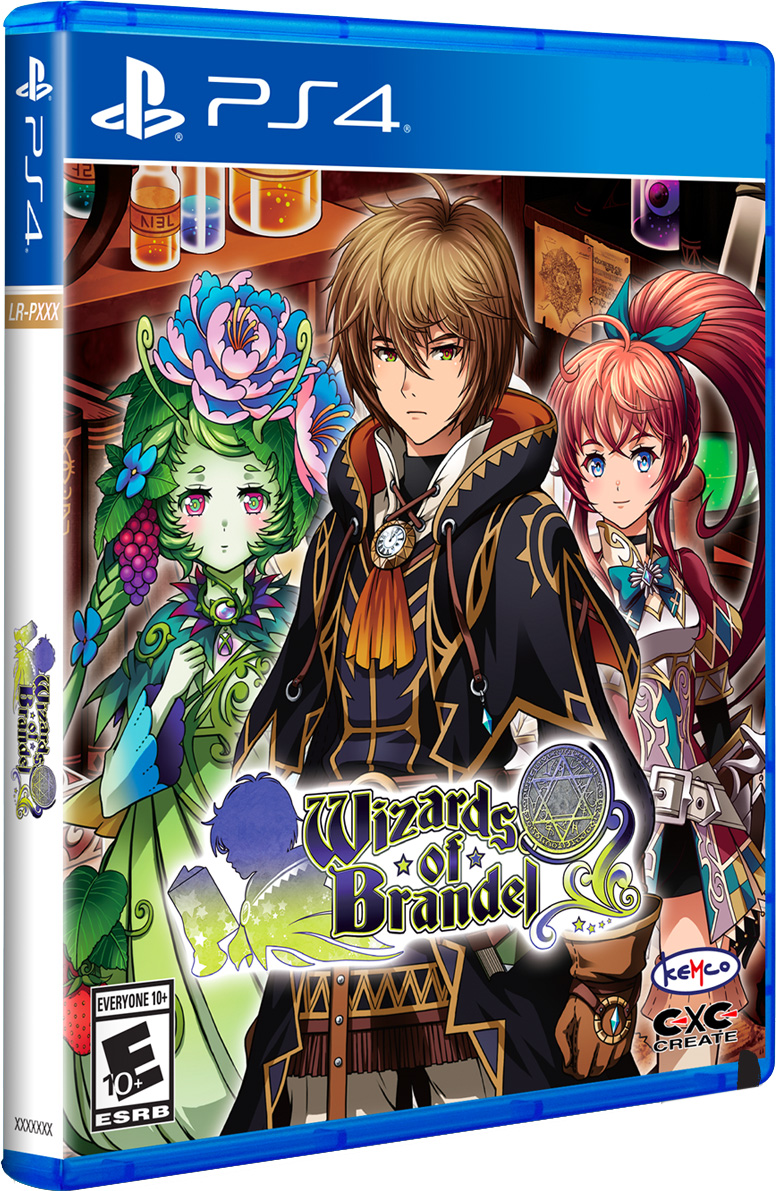 Wizards of Brandel brings us back to the world of high quality RPGs. The Asdivine Heart titles will always be legendary for their various quality of life upgrades to the genre and this one follows closely in its tracks. It may not be going as cosmic in is setting as those games but it’s got a fun story and you’ll have a fun time running through the game. It’s a bit on the short side but there are some post game elements that will help you run the length a bit more. I think I beat it at around 14 hours or so.
The story starts with Darius being evicted from his house since he hadn’t paid the rent in a very long time. All they left him is his bed so he now lives in the middle of a forest. One day he is approached by an immortal wizard named Mark who says he will allow Darius to live at his mansion as long as the hero does chores. Darius agrees but little does he know that Mark is a legendary demon lord who is wanted by the entire world. Is he really safe at this house?

The core cast is fairly small but each character is memorable. Brandel does a good job of giving each character a lot of character traits early on. First off you have Darius who is fairly emotionless most of the time although it’s very easy to tease him and cause the guy to blow up. He has a lot of different magical spells. Darius is obsessed with learning as much as he can but unfortunately none of those spells get him a lot of money. As he gets roped into this latest quest to save the world, he stows his fear and does his best.

Then you have the heroine Erica who is an agent of the government and was originally here to hunt Mark. Gradually she realizes that something isn’t quite right about all of this. Mark doesn’t seem like a villain and Darius is an upstanding guy so she aims to get to the bottom of this. She’s a good character and the game has an interesting dynamic with her and Darius. Usually you have the oblivious guy but the heroine likes him. In this game both of them only see the other as a friend so the supporting characters keep trying to push them together since that’s how it’s supposed to be…but the two main characters are both oblivious and just keep it moving. That was a fun twist and it must have been intentional.

Then you have Phelia who is a little girl that was kidnapped and experimented on until she turned into a plant monster. She has a lot of cool abilities now and may even be immortal but at the same time you never want to voluntarily have to go through experiments. The main characters decide to help protect her and ensure that this doesn’t happen again. It takes us back to our main plot where there is clearly someone evil in the world but it doesn’t appear to be the immortal wizard Mark. The heroes have to clear his name and find the main villain before too long.

In this case, the game is short enough where there aren’t many suspects so you’ll probably figure this out pretty fast. That said, the game does its best to still throw a few curve balls your way so it won’t be too easy to figure out what is going on. The story is interesting so you should be on board the whole time. The post game is more about tournaments and not really plot but there are some cutscenes to give closure to the characters as well. You can’t help but feel like Erica got the short end of the stick though.
Finally you have Mark who joins the party near the end. He has some kind of tragic backstory involving how he became immortal but the game doesn’t go into it. Every time someone asks him about it, Mark refuses to talk about it. It’s kind of neat that we don’t find this out, leaves a little mystery and room for your head canon here. I wish he would fight a little more since it seems like he should be pretty powerful but unfortunately that never ends up happening.

Then you’ve got Veldt who is the leader of the Guild. He seems pretty reasonable but the guy just looks like he’s a little more powerful than he should be. You’ll want to give him a second look to be sure and don’t let your guard down. Then there’s Cloney who is here to help the heroes. He will be King if our plan works out so that’s a pretty nice incentive for him to help us right? Not a bad prize for being a good citizen. There’s also the Warriors 3 who are pretty interesting antagonists. They are the best of the best in the kingdom and since they are after us, that means things will be tricky.

The gameplay is that of a turn based RPG. As I mentioned though, the game is light years ahead of most other titles in pretty much every way. You are able to speed up gameplay, go into auto battle mode, and use all kinds of tricks. You can turn animations on and off and so at all times you can play the game how you want. You may need to grind up some levels to beat the game but with auto battle turned on it’s not really much of a problem. It goes by very quickly and it’s just a lot of fun. I’d like to see more titles just make a game as smooth as these always turn out.

In a way you may get a little sloppy with the actual gameplay if you rely on this too much though so make sure you fight a bit on your own just in case. It shouldn’t be necessarily if you get a lot of level ups though. You have physical skills, magical ones, unity moves, and of course your physical attacks. Then you have the shop where you can trade in gems to buy incredibly powerful weapons, permanent EXP upgrades, and things like that. As a rule of thumb I always say to get the permanent upgrades first since they will come in handy for a lot of other things as the game goes on. By the end you will be really OP. A good way to grind is to click on the statues in each dungeon which let you run a gauntlet of 3 battles in a row over and over again. You get guaranteed gems which is huge.

The graphics are very good as you would expect. The art style always pops out for all the games from this company. The level designs are on point and the whole thing is just so colorful. Meanwhile the soundtrack is on point as well with a lot of tunes that sound just like something out of Asdivine Hearts. It’s all very fast paced and pretty hype. On a technical level the game really holds up.

Overall, Wizards of Brandel is great. It’s a relatively simple game as far as RPGs go but the execution in each area is just so good. You won’t be bored for a moment since there is always something happening here. The character cast is good and while the length isn’t very large, there’s enough content to keep you satisfied here. I’d definitely be down with this game getting a sequel and I hope the company continues to churn out more RPGs. I’d recommend getting this game if you like the genre or if you’re curious about starting this kind of game since this is a perfect entry point.

2 thoughts on “Wizards of Brandel Review”