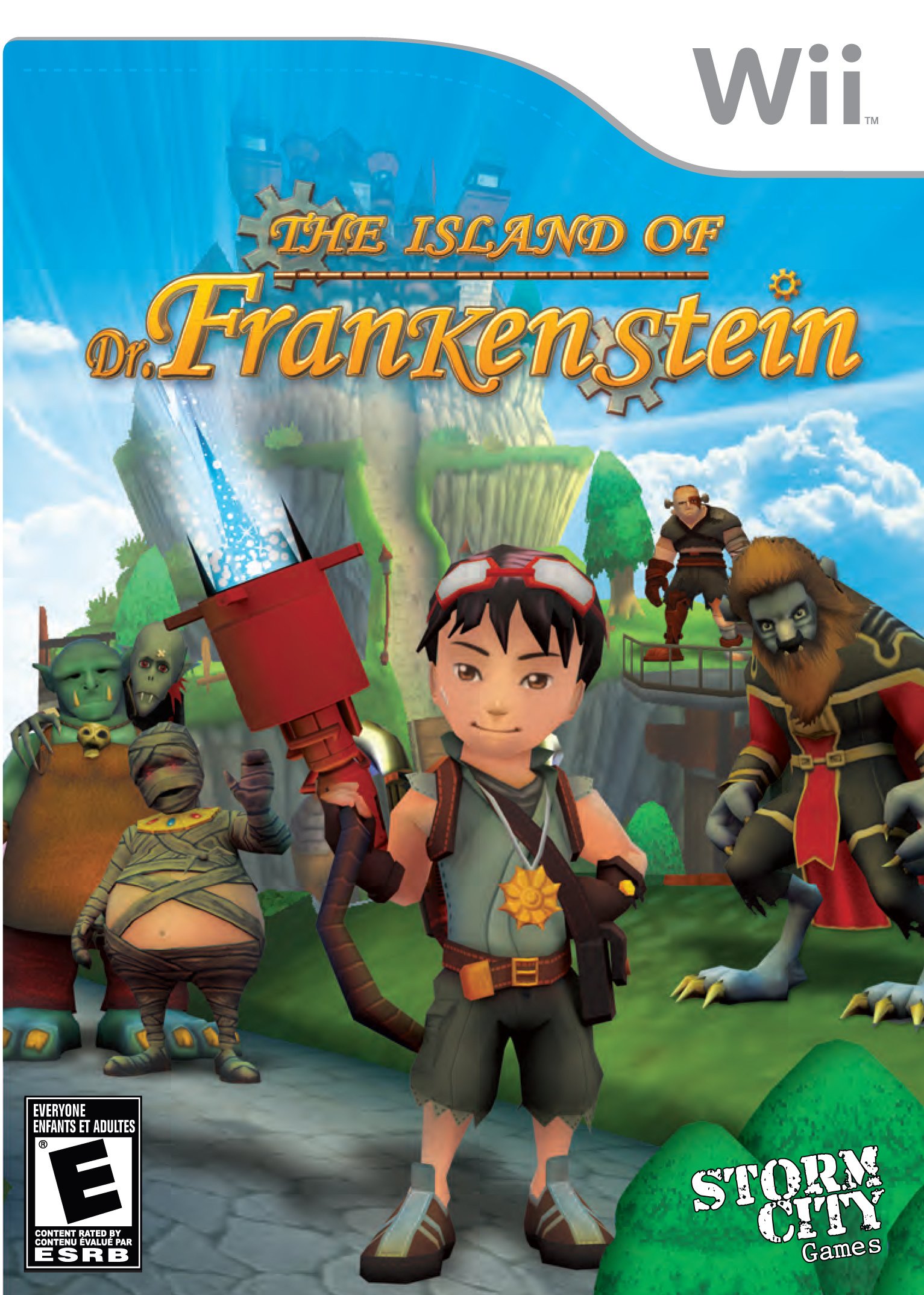 When you venture onto the Island of Dr Frankenstein you figure that you are going to be in for a pretty hype experience. Well, at least the concept of it. When you actually see the cover of the game you will probably begin to have some doubts and they will only continue to grow as you play through the game. It ultimately had a good idea of two but ended up squandering it all away.

The game starts off immediately with a kid named Franky being woken up by a pair of legs that are not attached to anything. The legs can’t talk of course but Franky can understand them anyway because he is just that good. Basically the mayor wants to see us because the island is sinking. We have to fix it fast or everyone is going to die.

I should add a little context here. So the main characters all live on a floating island which is powered by 50 generators. This is the land of monsters so all of the inhabitants are popular creatures like Dracula, The Mummy, Werewolf, A Floating Head, Frankenstein’s monster, and more. This is a way for them all to live in peace but the problem is that none of them are particularly tech savvy which is why Franky is around.

He fixes the generators so that the island doesn’t end up falling down on everyone. So that’s the setting and the main issue is that someone appears to be sabotaging the generators/engines so everybody is doomed. We have two missions, fix the various generators and also find out who the traitor is.

The game isn’t nearly as epic as that might sound though. The gameplay is really just about walking around the island and talking to people. You find out what they all want and get it from someone else. There is no way to run and the island is fairly large so be prepared for a while lot of backtracking and going to the same place like 20 times or more.

The characters add new demands at random points and you have no way to know this except to talk to everyone again after each mission you complete. It’s definitely not very efficient but you will have the island memorized by the end. There is one action you can take while moving around which is to use your Luigi’s Mansion vacuum cleaner. You suck up these little cosmic dust clouds which you then give to people when they ask for them.

It also leads to the game’s “danger” mechanic. If you let the dust clouds pile up too much then the island will crash. So you have to be sucking these things up the entire time as you go through the island. It adds an extra task to you just walking which is okay I guess but I don’t like mechanics like this where you are forced to just waste time and do something you wouldn’t do otherwise. It feels like it was just tacked on to mask the fact that there isn’t much to do.

Finally, there is the puzzle aspect of the game. Characters want you to fix their equipment so they’ll launch you onto a board of two pipes. One of them shoots out a laser and the idea is to add gears onto the map which will redirect the lasers to hit the other nozzle. This part could actually be pretty fun at least. It’s the kind of puzzle that I can get behind as it’s really about problem solving and you don’t have to worry about the game forgetting to give you context clues.

Here’s the issue though, you can only complete these puzzles by putting gears into it. To summon a gear, you have to use 10 cosmic dust clouds and 1 meteorite. The way to get meteorites is to open chests around the island or to dig them up. It costs 30 clouds to dig up a meteor so you can see how even now the game is trying to really wring some extra play time out of you. It makes you wish that the game would relax a bit and let you do your own thing. Don’t even attempt a puzzle if you don’t have enough gears since any that you use in the puzzle will be destroyed if you leave. Also be careful of how you spin the gears because if the laser hits you then you also lose all of your gears.

The motion controls are pretty difficult on that front so you can expect it to happen at least a few times by accident. Unfortunately at the end of the day that means that there is really no escape for you. Even the best part of the game has annoying mechanics which speaks volumes about the game as a whole. It’s not as bad as it could be since most of it is pretty harmless but I still expected better out of this one.

As far as the graphics go, the game certainly doesn’t hold up. I’m not sure if it was intentionally trying to look bad but that might be giving the game too much credit. There are only 2 musical themes in the entire game so you’ll be hearing them on loop for a long while. Definitely could have used more music but what is really missing here are the sound effects. There are none so when the characters are talking it’s like they are lifeless.

The only part of the game that shines through would be the writing. It’s very disjointed but the game is certainly going for a parody type of atmosphere for the most part. None of the characters are heroic and even Franky just wants to go to sleep. Even with the end of the world right around the corner, the characters can’t really dredge up the motivation to do anything. It’s pretty surreal but really works when you get down to the meat of things. At least it adds a little humor to the game or it would truly be soul less otherwise.

Overall, The Island of Dr. Frankenstein plays out about as you would expect. It’s a very short game with absolutely 0 replay value. You have to 100% complete all missions and collectibles in order to beat the game so there is nothing left to do. The game itself is around 3-4 hours tops so it won’t last you very long either. You can get this game for around $1 not counting shipping so it’s not a bad one to check out. That being said, you can definitely find better games on the Wii or basically any other console. This is an example of a title that really could have been so much better with some quality of life updates.

2 thoughts on “The Island of Dr. Frankenstein Review”